INSIDE: The Complete Guide to the Heckscher Playground Central Park with stone forts and tunnels for kids.

The friendly policemen pointed us in the right direction to Heckscher Playground, the oldest playground in Central Park in New York.

But before we headed off, we took that iconic photo with a New York City policeman selfie.

Because you have to, right?

Then the kids RACED across the grass to this well known New York playground for kids, Heckscher Playground.

Take a sneak peek below. 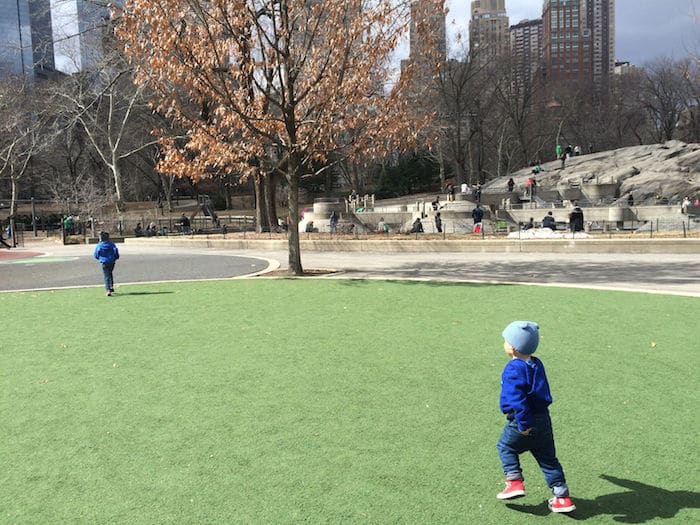 Heckscher Park Playground, the oldest playground in Central Park, was originally built back in 1926! 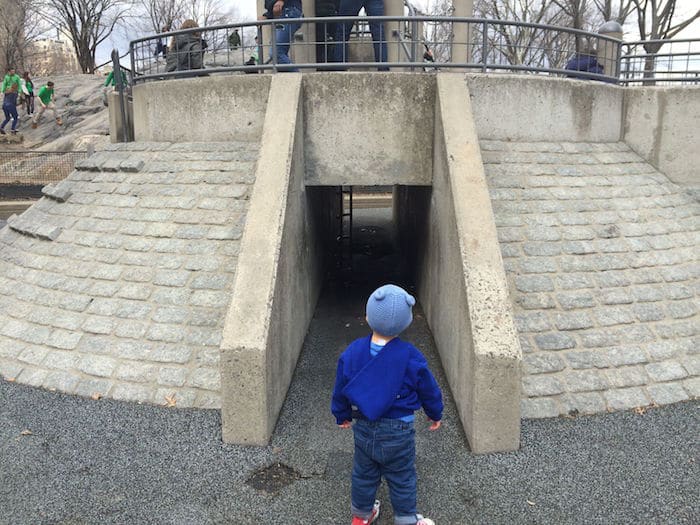 This childrens playground is a fort-and-tunnel style with:

RELATED: ULTIMATE guide of unique things to do in New York with kids 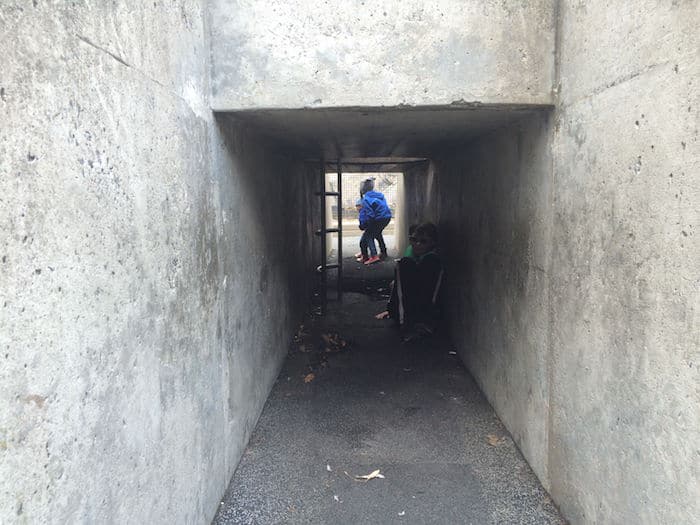 Multiple slides take the children back down from up high on the forts.

These rocks are just as good as the playground equipment – kids are all over them! 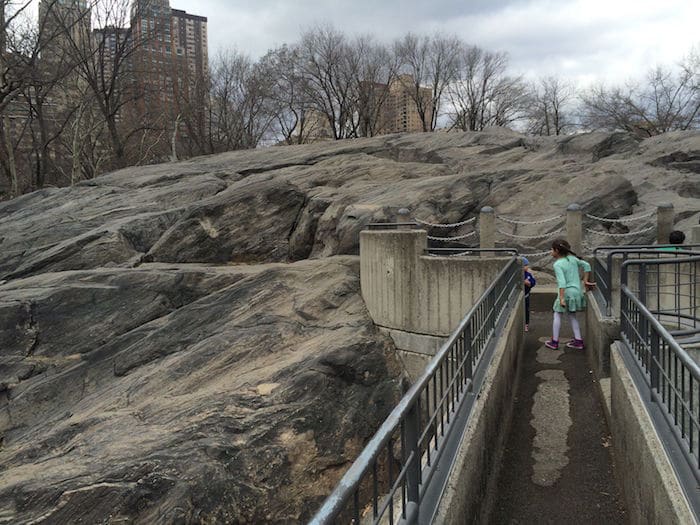 I can’t quite put my finger on what this part of the playground reminds me of.

The next, future space stations on Mars.

One thing is for sure, this playground was before its’ time, and it continues to capture the imaginations of kids from around the world. 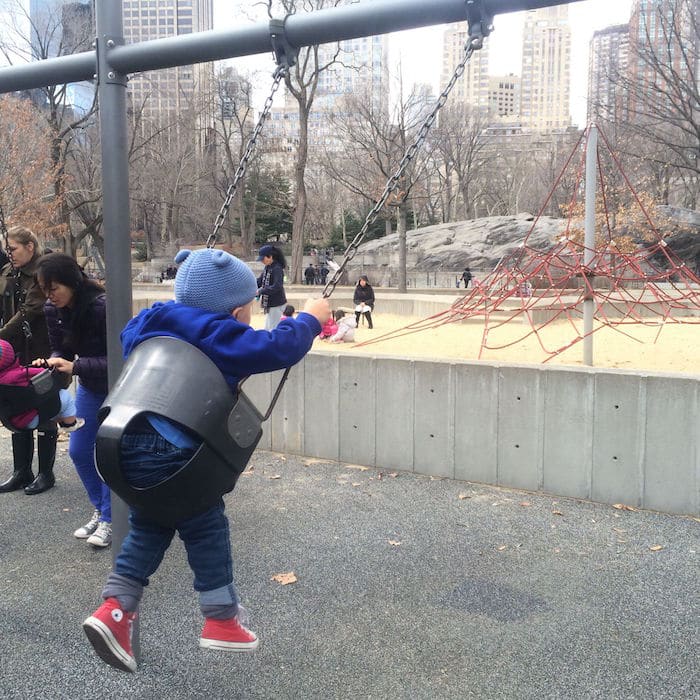 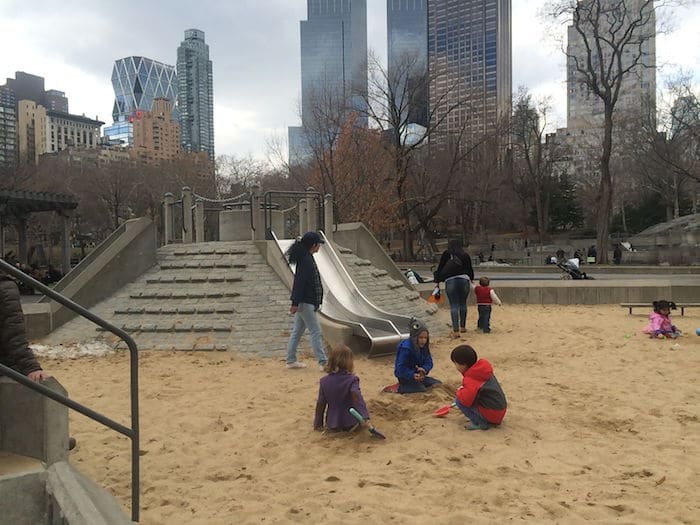 In the centre of the sandpit sits a twin-carriage toddler-sized slide set on a smaller pyramid structure.

The Heckscher playground at Central Park was reconstructed in 2005, and is fully fenced.

It’s definitely one of the best Manhattan playgrounds, and up there on our list of the best playgrounds in New York City for kids from toddlers to elementary school. 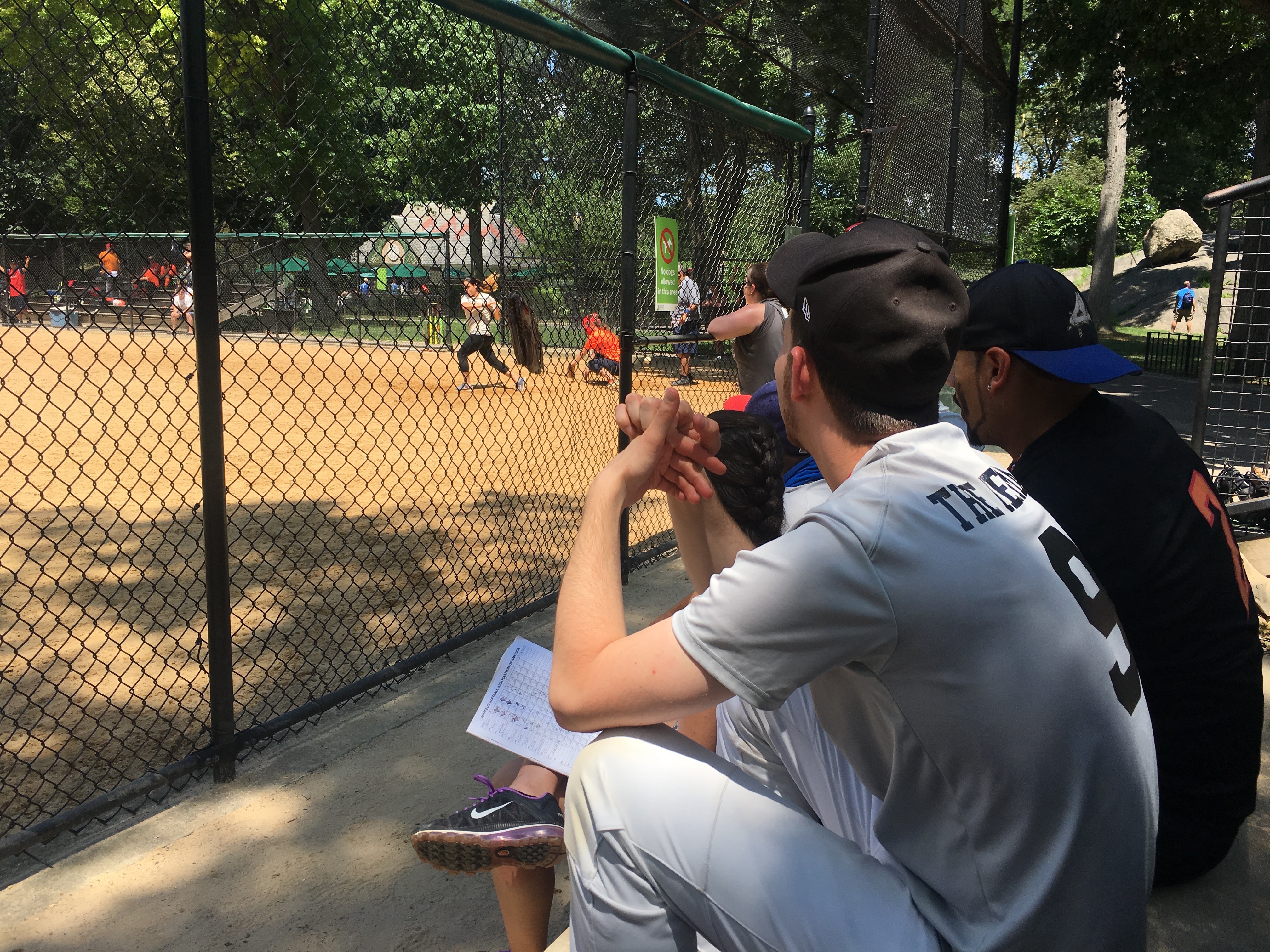 The Heckscher Ballfields consist of six baseball and softball fields.

Find them located at 63rd Street, west of the Carousel.

Baseball and softball leagues from all over the city play on these six fields every year.

You’ll be most likely to find a game in play during May to July, and there’s plenty of seating for you to stop and enjoy this New York family tradition. 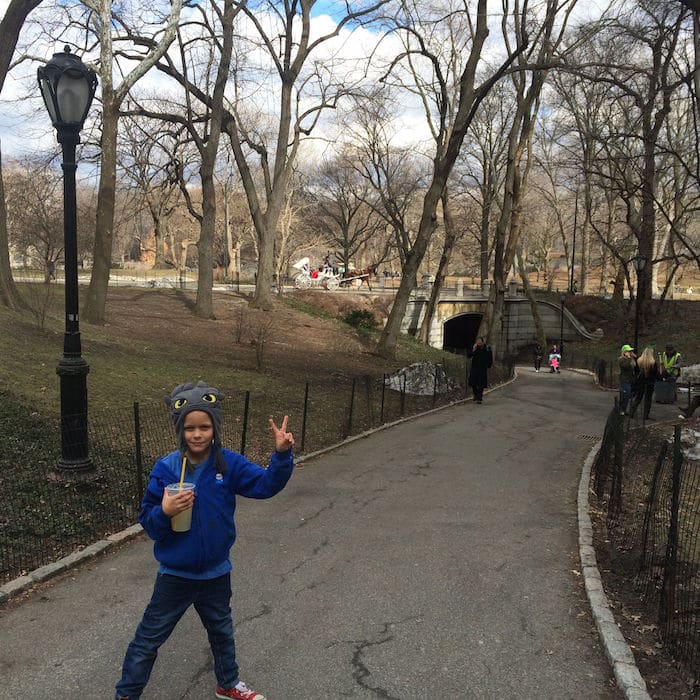 Visiting Central Park should be on your list if you are looking for interesting things to do in New York City with kids.

We spent three WHOLE days on our last trip wandering the park, visiting all the Central Park playgrounds and visiting the museums that border Central Park.

We barely scratched the surface! 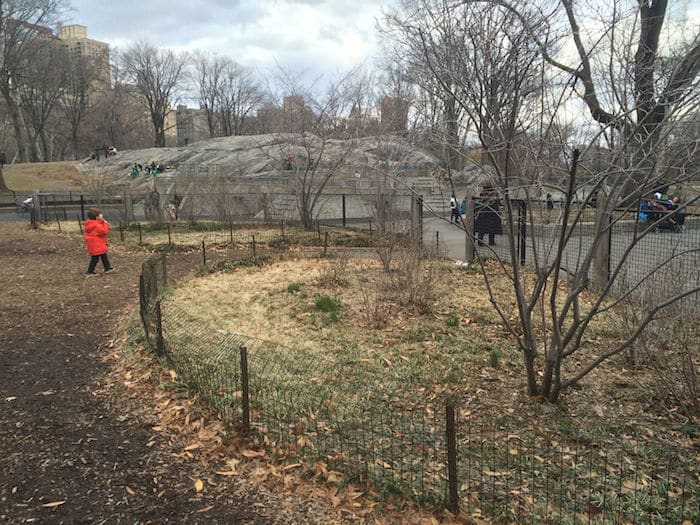 Hand on heart, my favourite thing about travelling with kids is exploring local playgrounds.

It’s hands-down the best way to find and meet locals, if only for a few minutes chat. Manhattan locals are happy to share their top tips on the best places to visit with kids in New York.

We have been given so many golden nuggets of insider travel from awesome mums (moms) and dads we’ve met while pushing a swing, catching a child at the bottom of a slide, or sharing a smile as our offspring played alongside one another, as brand new ‘best friends’.

Heckscher Playground was no different. 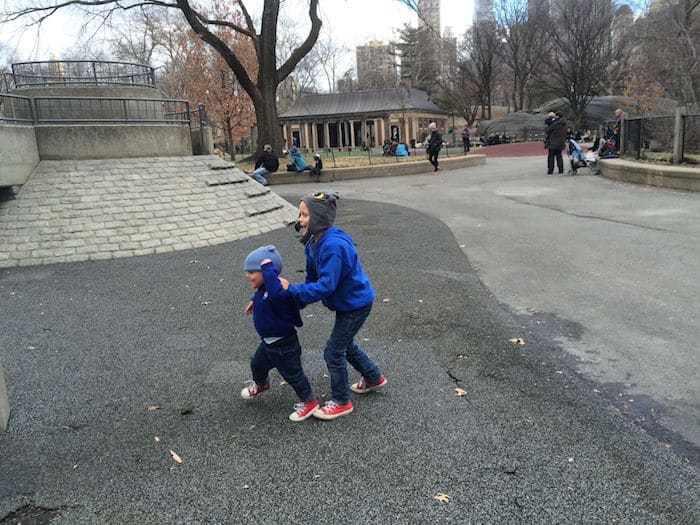 I chatted to a few Manhattan moms who gave us tips on:

The places THEY go when they head out with the kids.

NOT the tourist stuff. 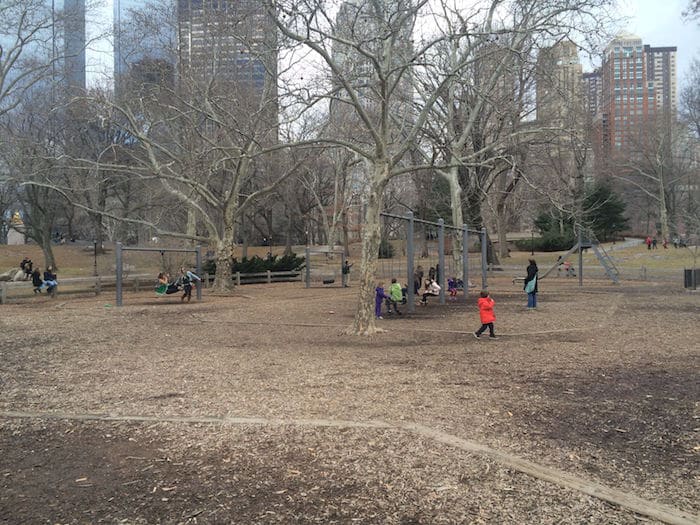 Turns out the Heckscher Playground is a popular haunt with locals, and visiting families with kids, because it’s the closest playground to the W59th st entrance to Central Park.

This is the road across from The Plaza, where the horse-and-carriage rides wait.

It’s also within walking distance from:

Don’t be put off by the dry landscape if you are visiting after winter like we did.

Kids don’t care about a bit of dirt. 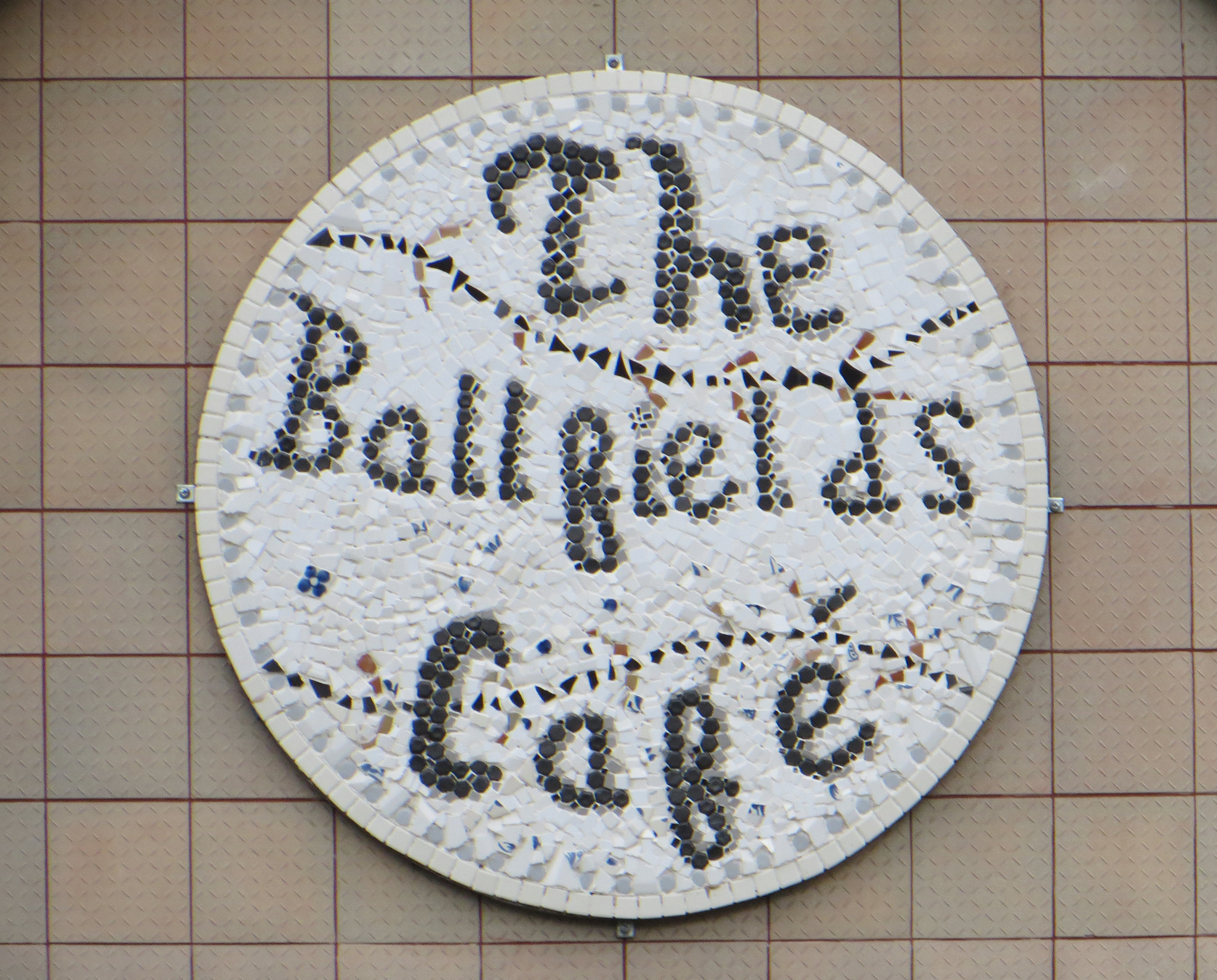 Where to eat at Central Park

Look out for the Snack carts on site near the Heckscher playground.

Ballfields Cafe is the closest cafe for coffee and light meals. 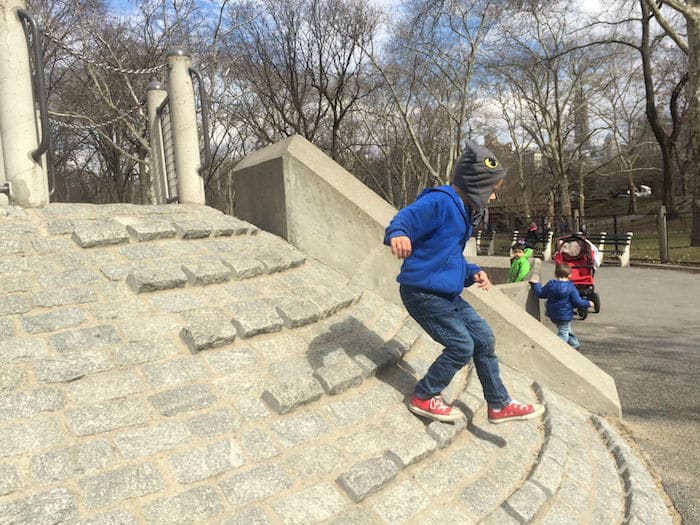 How to get to Heckscher Playground in Central Park

By Subway train: Catch the N or R train to 5 Ave Subway Station

There is no parking in Central Park.

Many parking garages are available nearby.

Heckscher Playground is best for children ages 6 to 12.