INSIDE: Everything you need to know about The Discovery Zone at the Australian War Memorial Canberra.

The Australian War Memorial Canberra is surprisingly interesting for kids!

The Discovery Zone at the Australian War Memorial in Canberra, designed for families and children, is an opportunity to experience what life was like in some of the places Australians have served.

We were not expecting that.

The Discovery Zone made our visit to the War Memorial Canberra one of the HIGHLIGHTS of our Canberra visit.

Take a sneak peek below. 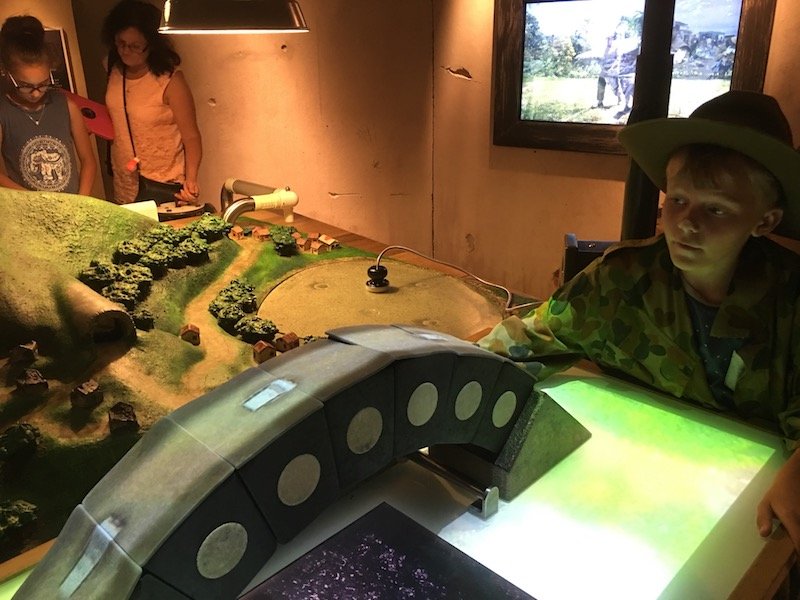 Discovery Zone Canberra is super hands on, with opportunities to discover something of the experiences of Australians during conflict and peacekeeping.

1.   A trench on the Western Front in France from the First World War

2.  The Australian home front during the Second World War

3.  An Iroquois helicopter hovering in a field in Vietnam

5.  A peacekeeping mission in a war-ravaged community 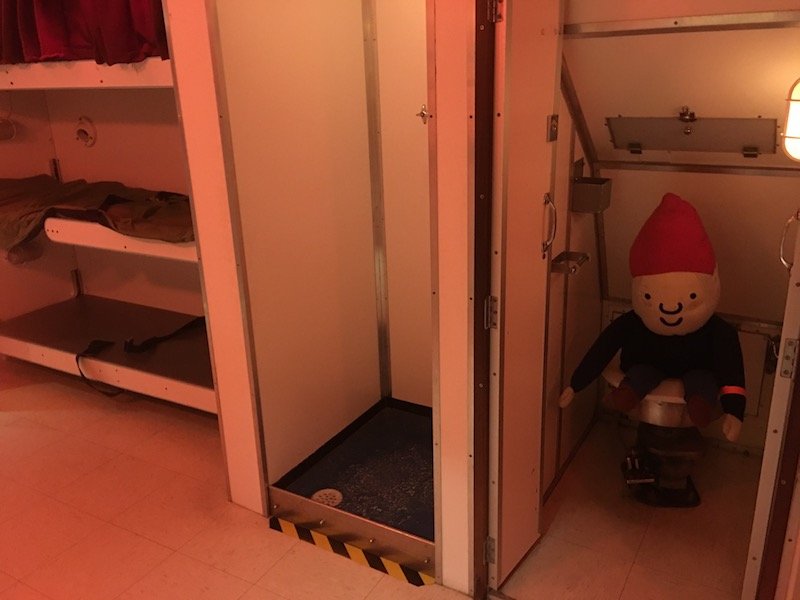 There’s hands on opportunities to:

RELATED: The ULTIMATE LIST of THINGS TO DO IN CANBERRA WITH KIDS

The Discovery Zone is an educational space for visiting school groups.

The public is invited to enjoy this space from 12.30 pm to 1.30 pm on weekdays, and all day during weekends, public holidays and ACT school holidays. 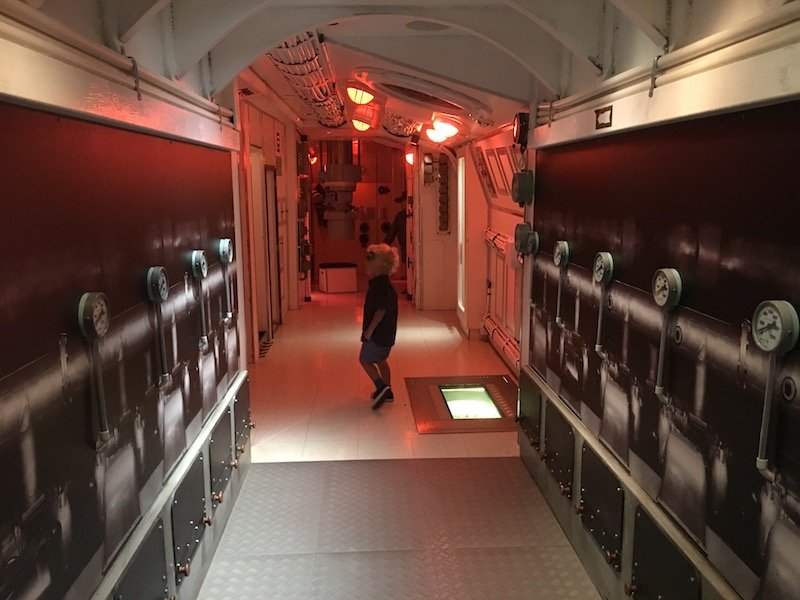 Here’s a preview of the activities kids can do: 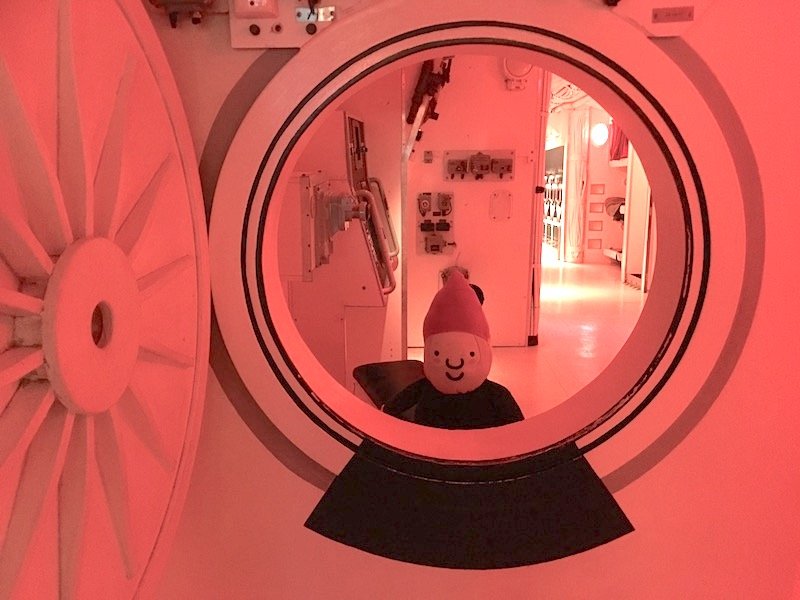 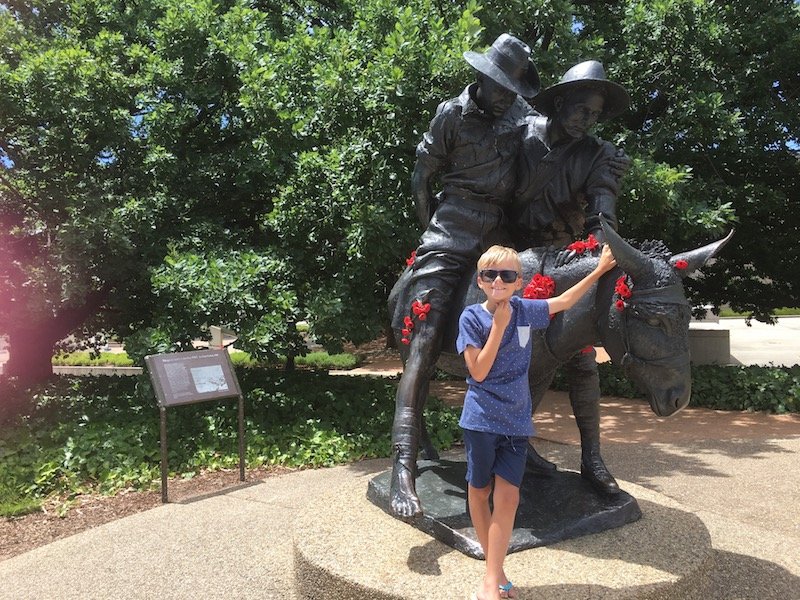 No.1: Statues in The National War Memorial Grounds

Search for the famous Simpson and his Donkey statue in the gardens.

The story behind this act of “mateship” and care is one all Australian kids should know.

He took part in the landing on Gallipoli on 25 April 1915 and became famous among Australian troops for his bravery and compassion.

Under continual shell fire, he used a donkey to carry water up Shrapnel Gully, and to bring wounded men down to the beach on Anzac Cover from the firing line on the ridges above.

After less than four weeks in action, he was fatally wounded on 19 May 1915.

Although he was known on Gallipoli by a variety of nicknames, most of the soldiers who witnessed his bravery knew him as the man with the donkey, without ever learning his name.

Simpson has come to embody for Australians the spirit of self-sacrifice in war.” 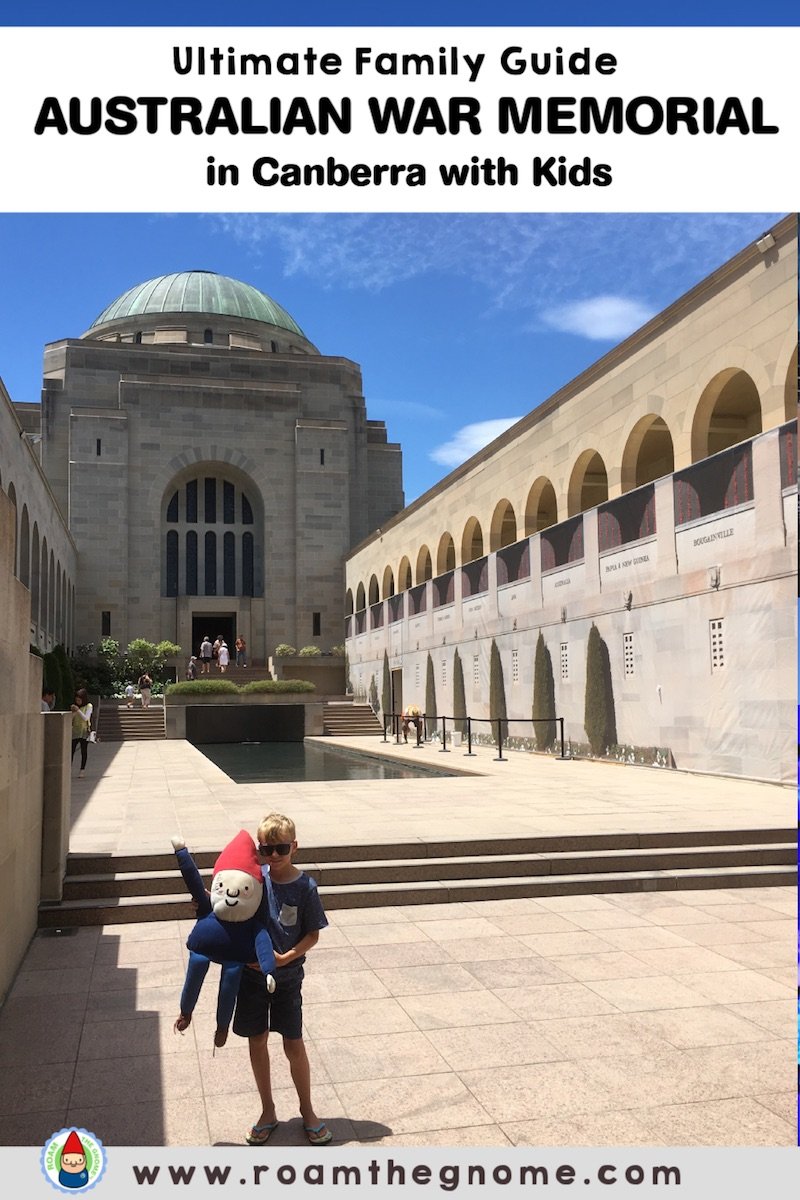 No.2: Front Entrance of the War Memorial Museum

Commemorative Area, the Roll of Honour, and the Hall of Memory

Stepping through the front entrance to the Memorial, your attention is immediately captured by the Commemorative Courtyard.

Straight ahead are the Pool of Reflection and the Eternal Flame.

Above are 26 sculptures carved in sandstone, representing the people and animals inhabiting Australia.

All the elements here are designed to evoke a mood of calm contemplation.

Surrounding the courtyard and glimpsed through arched cloisters is the Roll of Honour.

Here are inscribed in bronze the names of more than 102,000 Australians – all of whom have died during or as a result of serving their country in conflicts since 1885.

The Hall of Memory, set above the Pool of Reflection, is the heart of the Australian War Memorial.

It can only be reached by walking past the names of the more than 102,000 who have given their lives in the service of this country. 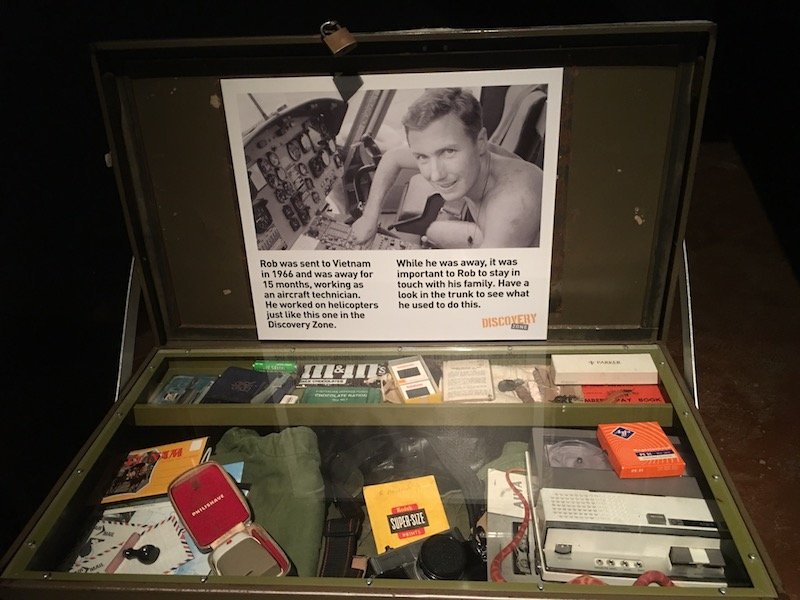 Counted among the greatest treasures of the Memorial, the First World War dioramas were constructed in the 1920s.

Originally built to assist Australians to understand the devastation and danger of battle, the Dioramas are still a stand out feature of the Memorial experience. 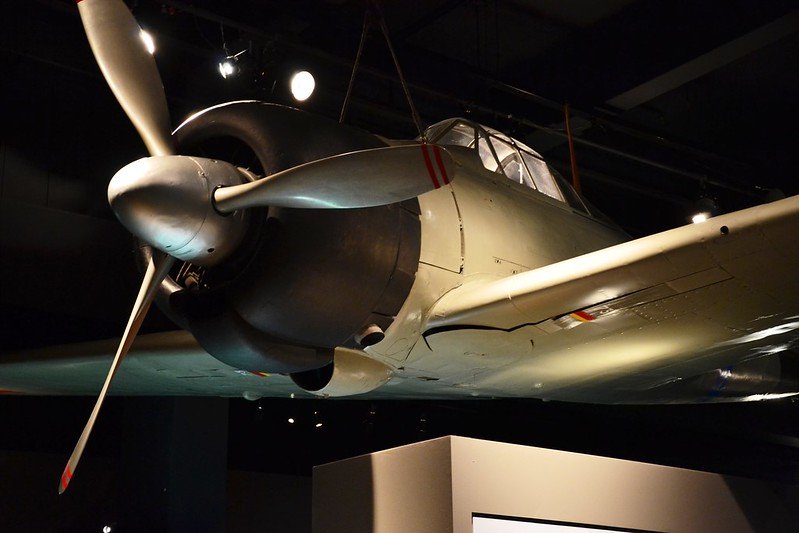 Aircraft Hall contains the exhibition Air power in the Pacific, 1941–53.

You can learn about both the practical side of air power – how aircraft work and are put together – and the stories of how it affected everyday life during the Second World War and the Korean War.

Anzac Hall shows some of the Memorial’s most significant large objects, using sound and light in innovative ways.

The objects themselves become screens to tell compelling stories of Australia’s servicemen and women. 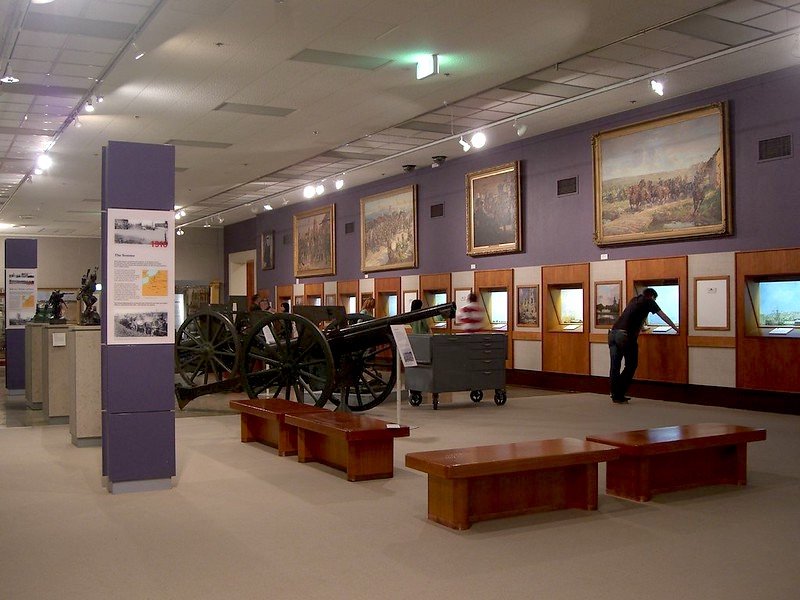 There are four permanent galleries:

The First World War including Gallipoli and the Western front.

Covers Australia’s early military history from European settlement to the end of the Boer War.

You can also learn about the extraordinary efforts of Australians in Afghanistan through the words of our veterans and their families, and hear stories from survivors of the horrific Holocaust.

Each of these galleries has things of interest for children, particularly large scale replicas of vehicles, but just be mindful that there are objects and stories of a sensitive nature in here too. 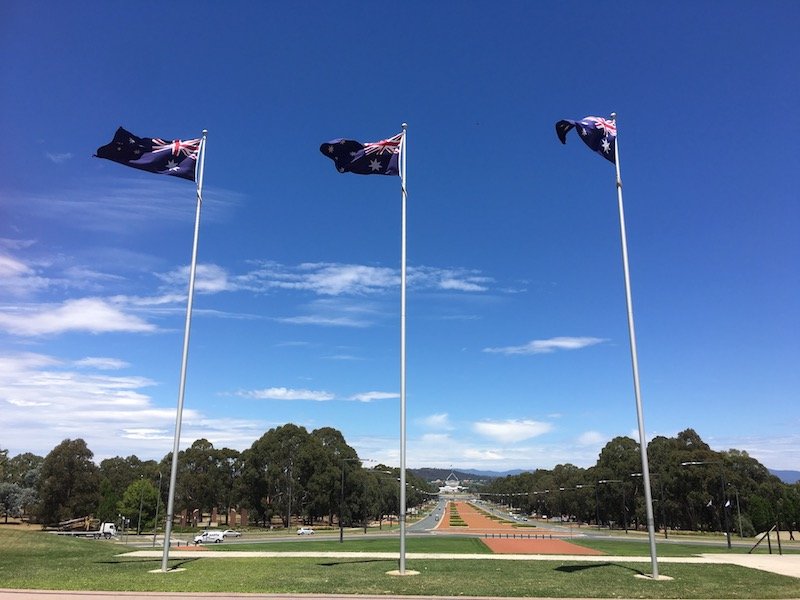 Commencing at approximately 4.55 pm AEST, the Memorial farewells visitors with its moving Last Post Ceremony in the Commemorative Courtyard.

Each night the ceremony shares the story behind one of the names on the Roll of Honour. 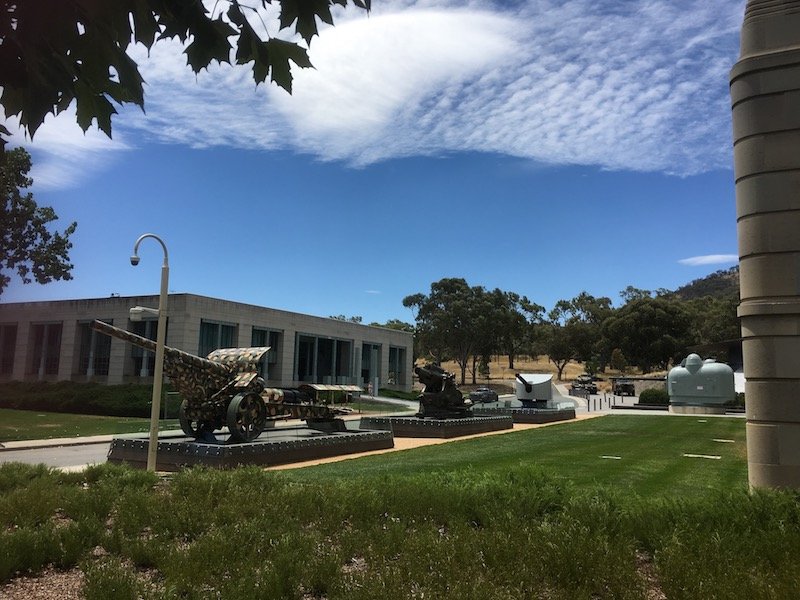 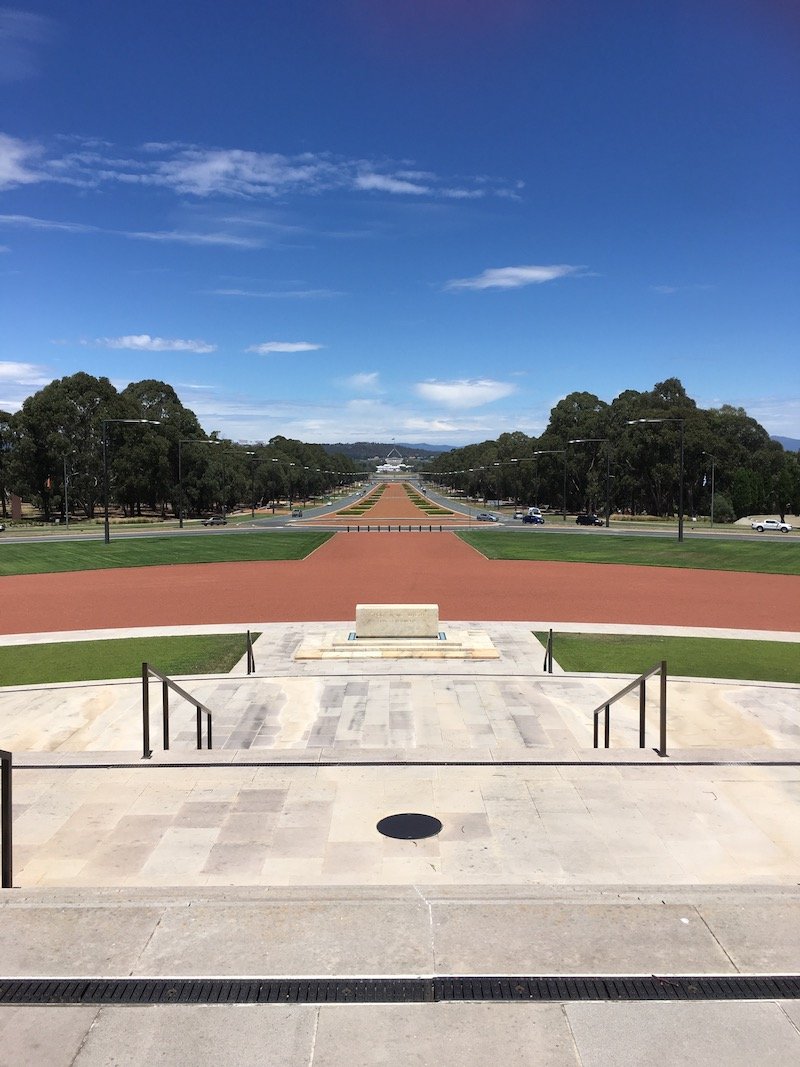 How to get to the National War Memorial Canberra

By Car: The National War Memorial is located at the top of Anzac Parade, just minutes from Canberra’s city centre. Click here for directions from Google Maps.

Parking at the Australian Warm Memorial

Poppy’s Café is located on the Australian War Memorial grounds.

The cafe has a wide variety of beverages, from fresh coffee to milkshakes. 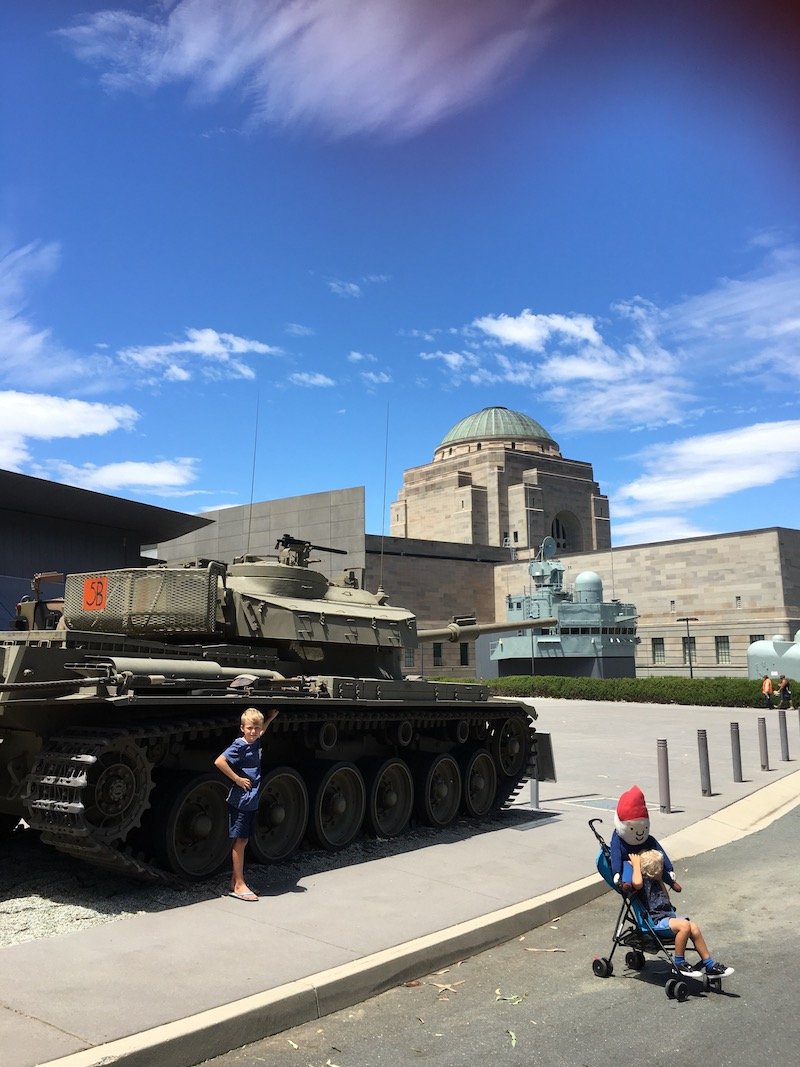 It’s educational, reflective, and engaging all in one.

Looking for MORE SUPER DOOPER FUN Things to Do in Canberra with Kids?

Click the links in blue below for more Canberra attractions.