INSIDE: Everything you need to know about the Stratford Olympic Park Playground.

Tumbling Bay playground at Olympic Park in London near Stratford station was our afternoon goal, after a delightful morning spent exploring and playing at the Discover Story Centre in Stratford.

To get there, we walked towards Westfield Stratford City, and crossed the pedestrian bridge, heading towards the London Olympic Park Aquatics Centre.

We were surprised by the many things to do at Olympic Park London – not just playgrounds.

Take a look below for details! 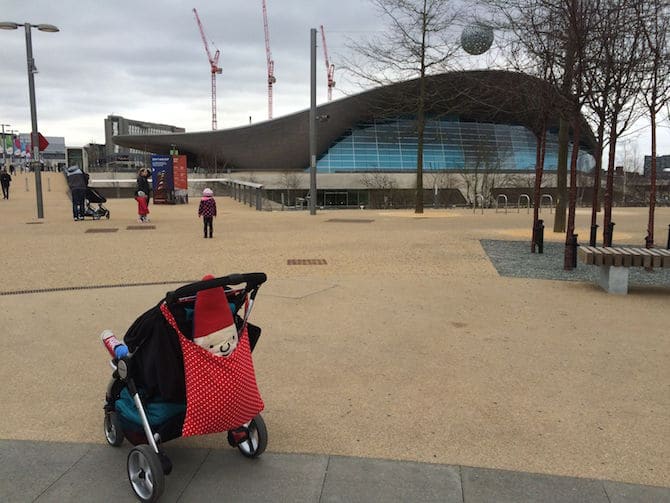 Best Things to do at Stratford Olympic Park Playground 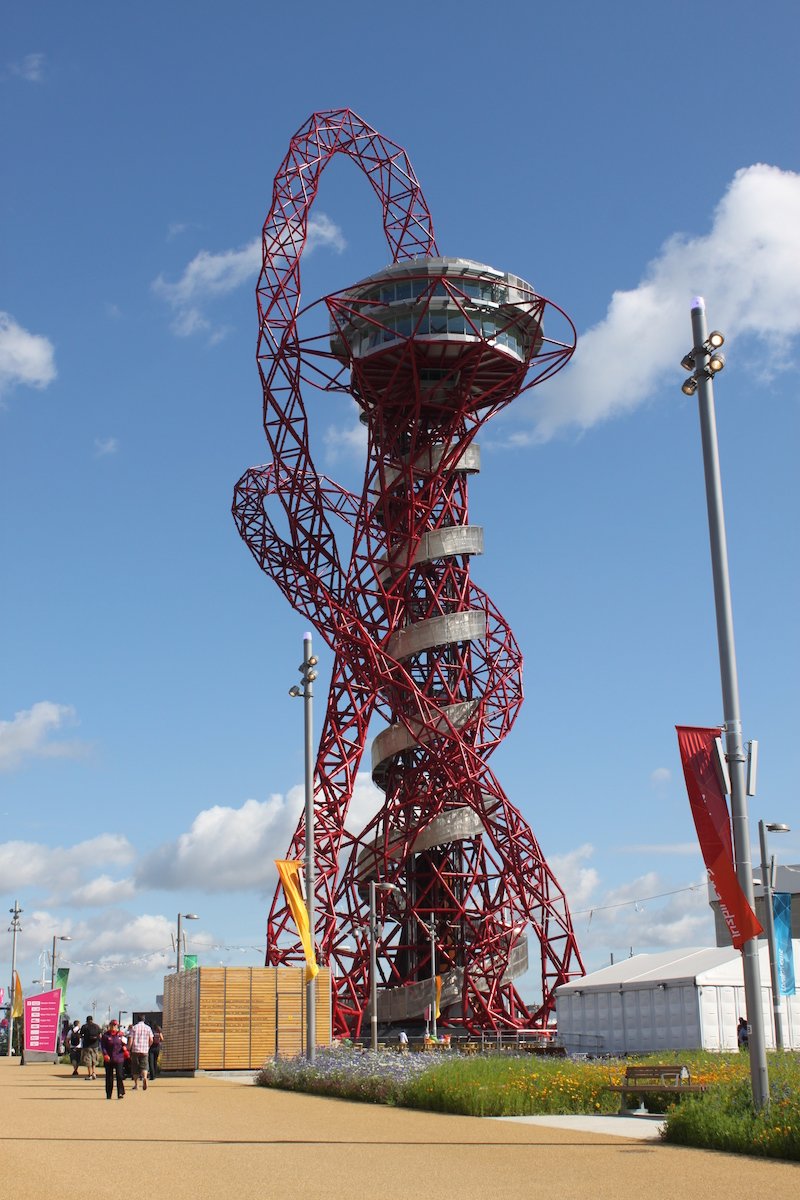 Did you know you can RIDE THE SLIDE at the ArcelorMittal Orbit?

It’s the world’s tallest and longest tunnel slide, and it’s inside this amazing sculpture artwork!

Be prepared to whiz down at speeds of up to 15 mph!

Family friendly for kids who are at least 1.3 meters in height and a minimum of 8 years old.

Buy tickets here through Get your Guide 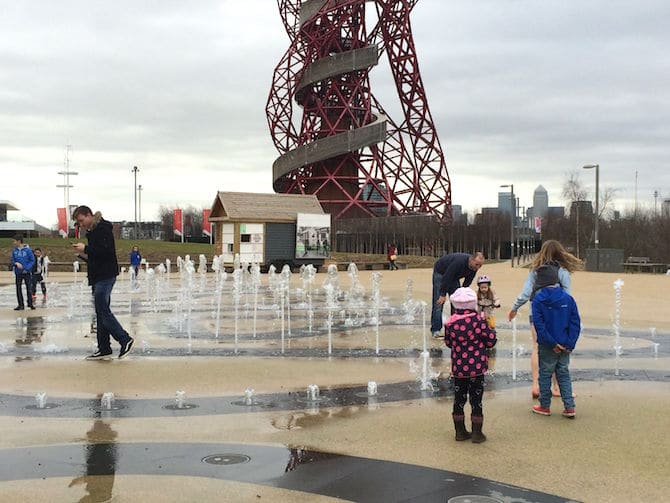 No.2: The Waterworks Fountain

Right in front of the Orbit, the Waterworks Fountain, a labyrinth-shaped water park made up of 195 shooting jets of water, danced in a rhythmical pattern.

Ned dodged the freezing streams of water, but the toddler couldn’t quite beat the unpredictable streams and drenched his ONLY pair of shoes! 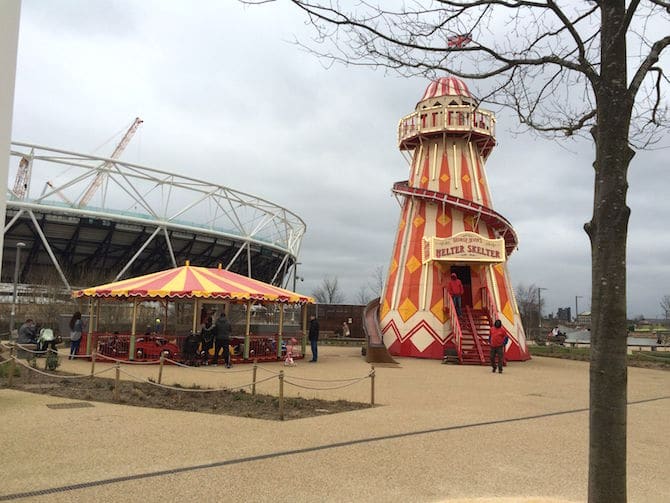 To the right, the Vintage Carnival Rides caught our eye. 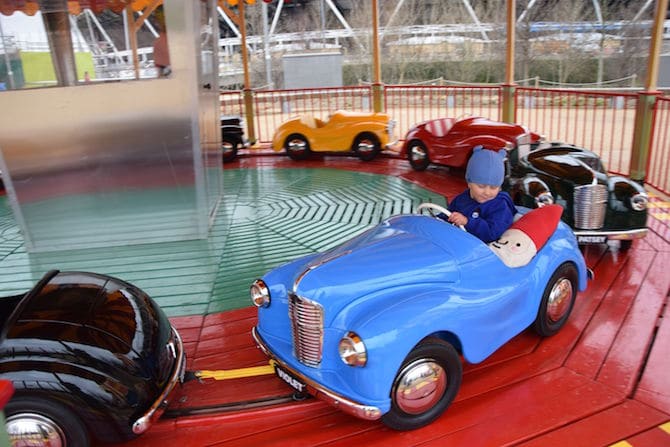 Jack rode the carousel of cars. 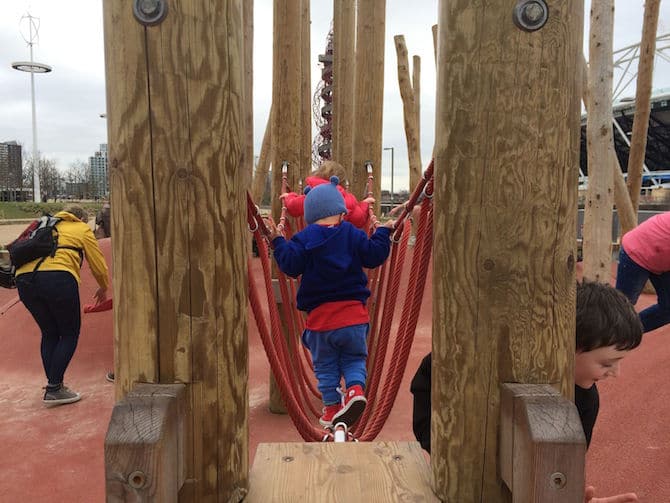 A little further along, we spied the Pleasure Gardens Adventure Playground  in the distance.

The kids ran for it, and I chased after them with the stroller.

We didn’t make it any further! 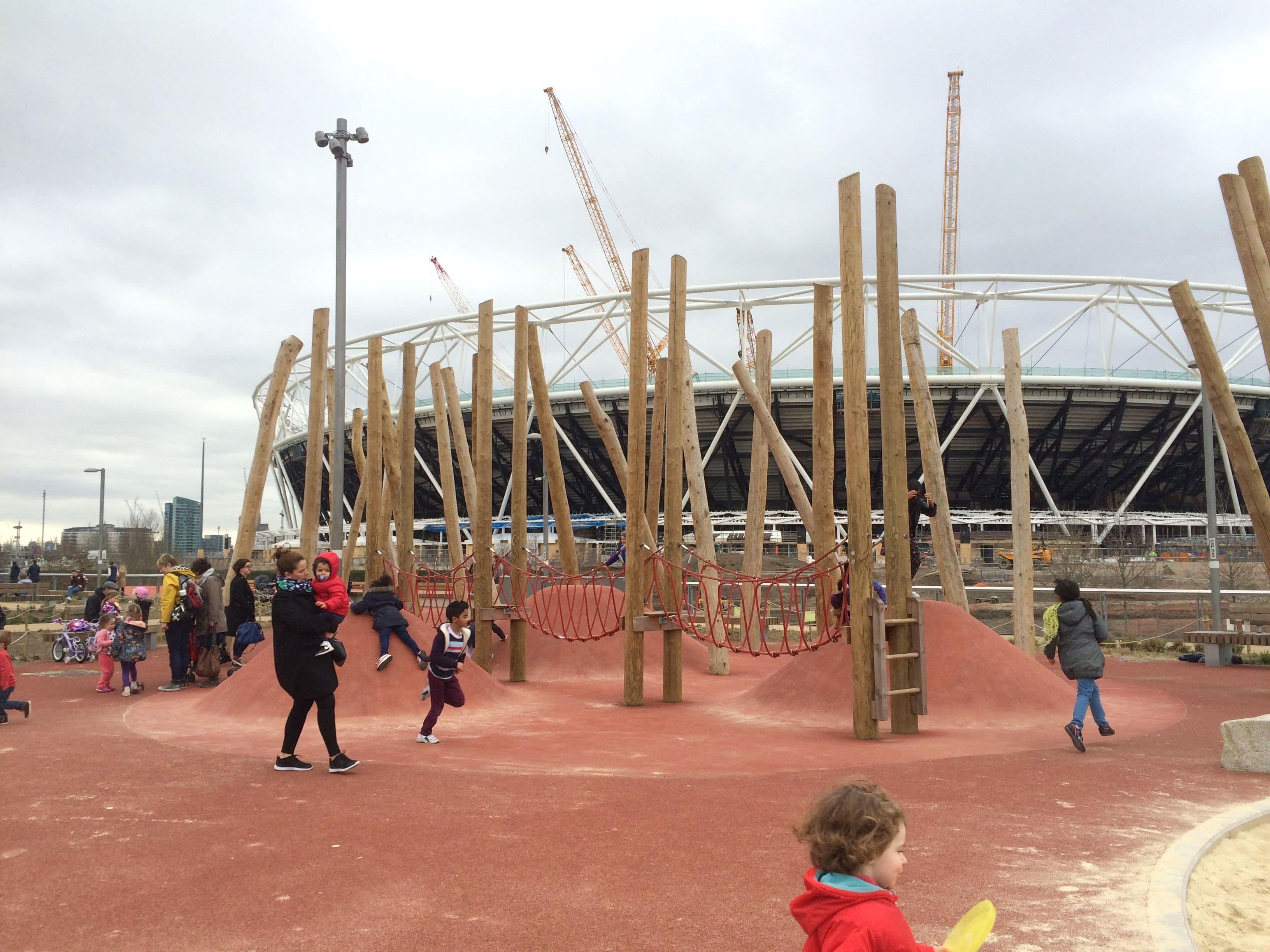 Playgrounds in London for kids

Pleasure Gardens Playground Olympic Park was our final stop for the day, a big afternoon of adventure play and parkour jumping that wore them out.

(Tumbling Bay Playground is back on the list for our next UK trip!)

READ MORE: The Ultimate Guide to the BEST London Playgrounds for Kids (NEW) 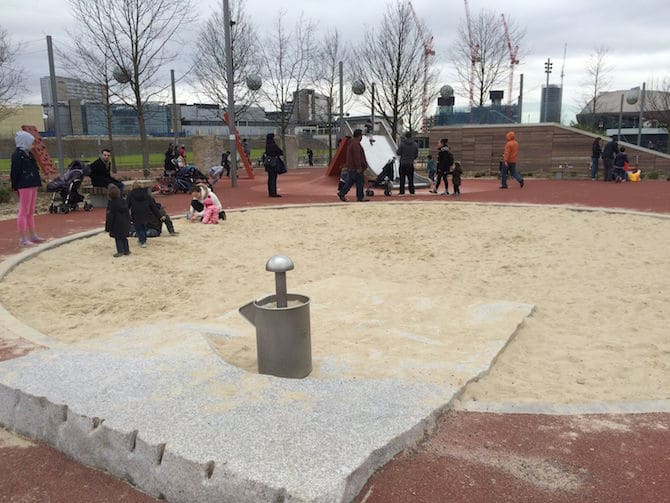 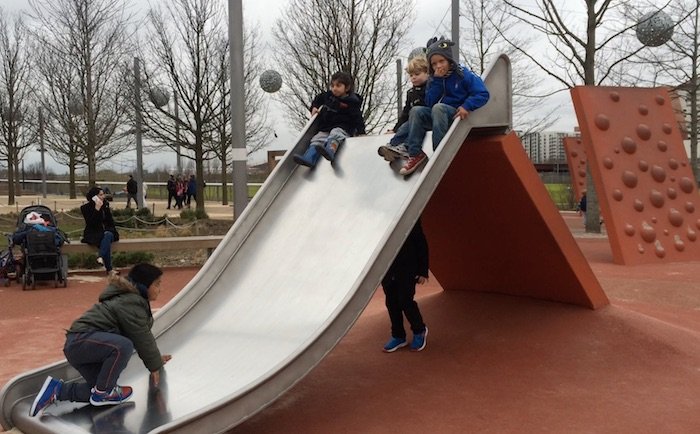 And, a super wide silver slides for racing your friends 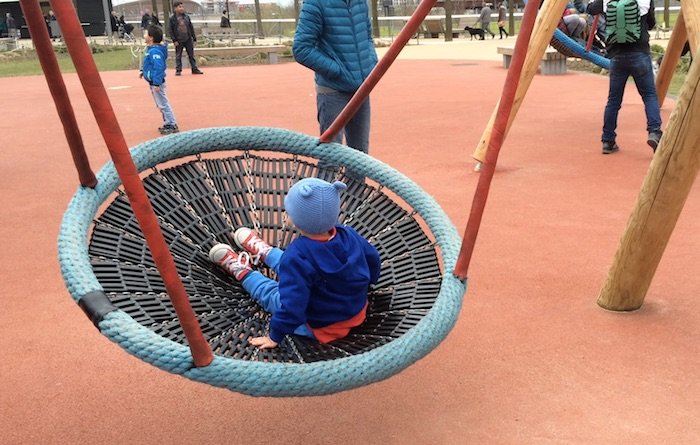 There’s a vibrant red climbing wall with handholds for bouldering.

Leaping from structure to slide to boulder wall is the ULTIMATE PARKOUR adventure.

We stayed until dark! 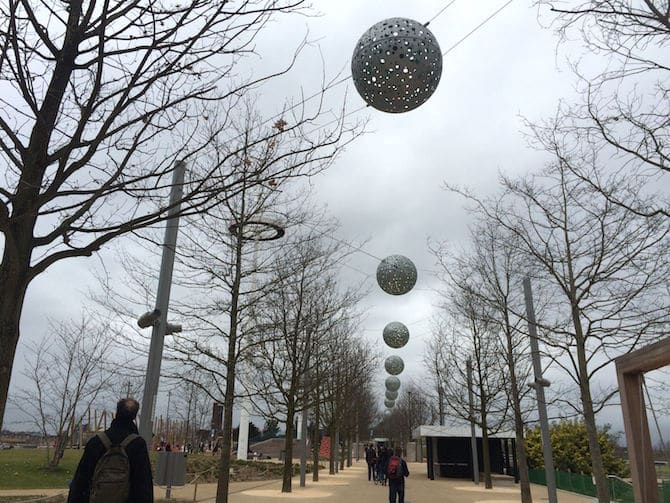 How to get to Pleasure Gardens playground

From the Vintage Carnival rides, turn right and walk along this wide pathway (above) until you spy giant upright logs standing to attention.

Walk towards them, then turn left to enter this Olympic Park playground. 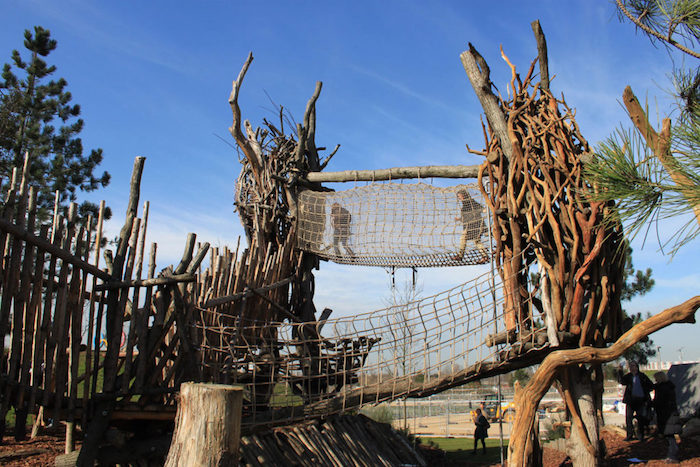 How to get to Tumbling Bay Playground Olympic Park

The actual Tumbling Bay playground in Olympic Park is further away in the northern part of Olympic Park.

The Tumbling Bay nature playground is whimsical and full of quirky timber treehouses with netted walkways, wobbly bridges, and rope bridges too.

It’s the best nature playground in London to play hide-and-seek with your newly found friends.

The Tumbling Bay kids playground in London sits alongside the Timber Lodge community centre and café. Parents and kids can relax with a range of fresh, home-cooked food and drink.

Tumbling Bay Olympic Park playground is 10 minutes walk from Stratford station (if you can get further than we did!), or enter via Abercrombie Road if you arrive by car.

These are the two best Olympic Park activities for kids. 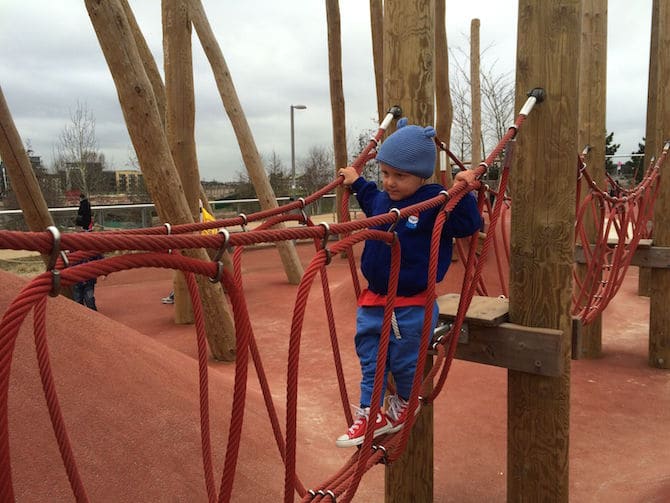 The Olympic Park fountains opening times are from 9am to 5pm.

Water fountains operate from March to October, and are closed during the winter months due to lower temperatures. 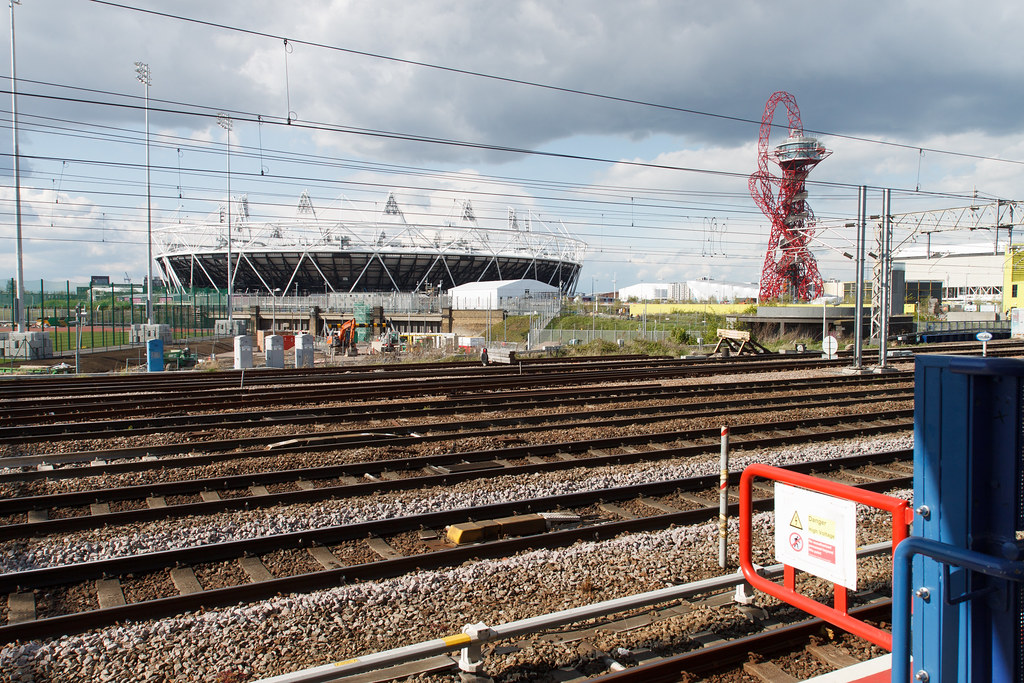 How to get to Olympic Park London by tube, train & car

By Tube: Stratford station (20 minute walk) is served by the following:

By Train: Stratford international station (20 minute walk) is served by the following:

By Bus or Bike: Please click here for details

The closest car parks to London Stadium are at Stratford Westfield.

MORE Things to do near Stratford London for Kids

Here’s a perfect London day out with kids itinerary.

No.1: V & A Museum of Childhood London

Begin your day with a trip to V&A Museum of Childhood.

This is one of London’s best museums for kids, with bucketloads of toys to play with, hands-on activities and the best kids meals around.

Stop by Old Spitalfields Market for a peek around the stalls if it’s the weekend. 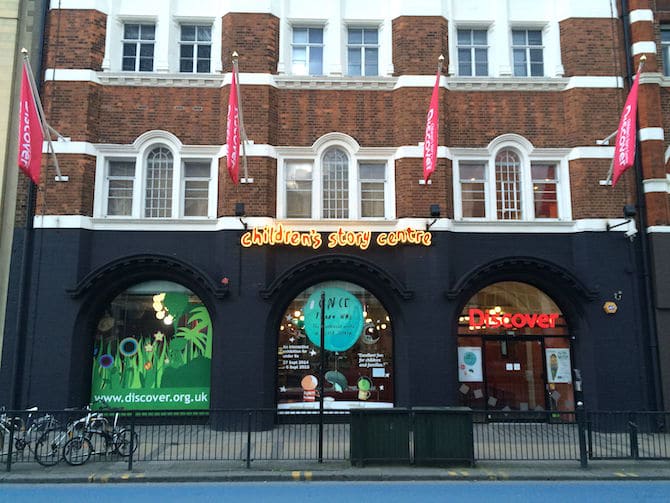 Head next to the Discover Story Centre is opposite the Stratford Tube Station on High Street.

We HIGHLY recommend this place for kids under 10.

Finish the day by visiting the Olympic Park playgrounds in the early afternoon to wear the kids out before bed.