Next to the Flinders trail that runs along the Yarra River, but hidden amongst leaves and greenery, is the unique Birrarung Marr Playground.

Finding a playground just a few hundred metres from Flinders Street station in Melbourne CBD is nothing short of a miracle.

But finding a Melbourne playground surrounded by nature is next level!

This one is well hidden, and known only to locals.

Take a look inside below. 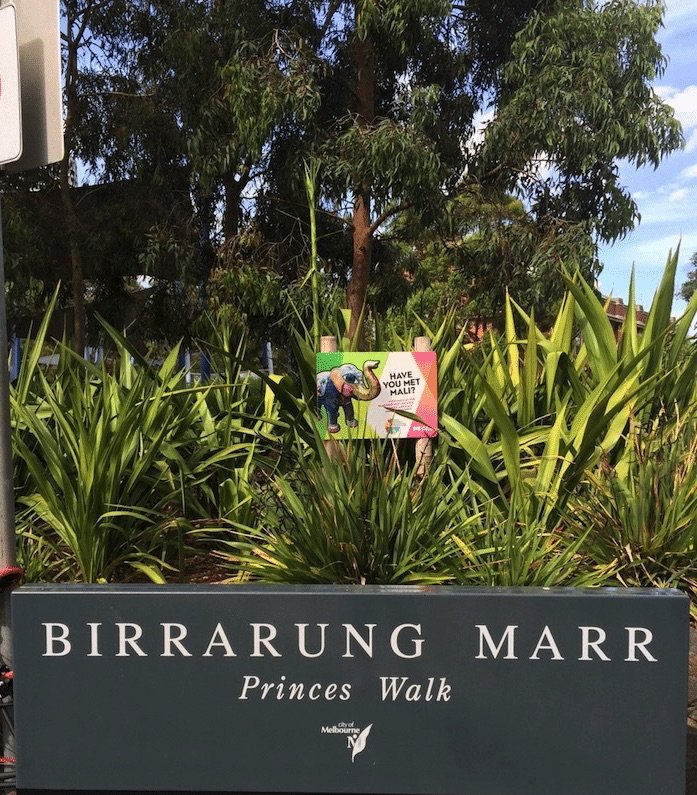 Wander down towards the river from Federation Square and turn left.

You’ll find the playground just a few hundred metres along on the left. 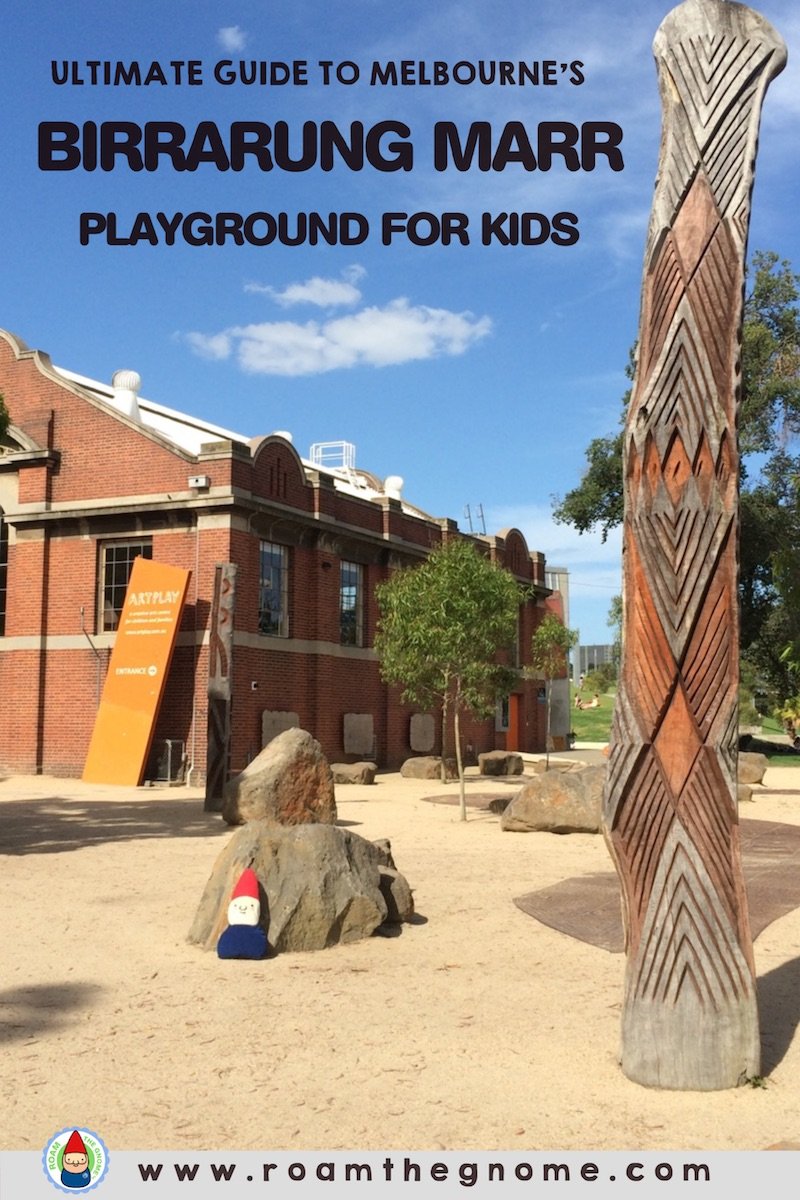 Kids have plenty of grass to run around on.  (BYO healthy snacks too.)

At one end sits a semi-circle of Sacred Stones, reminiscent of Stone Henge.

The only downside is it’s not fenced, and there’s multiple entrances and exits.

Keep a close eye on those quick runaway toddlers. 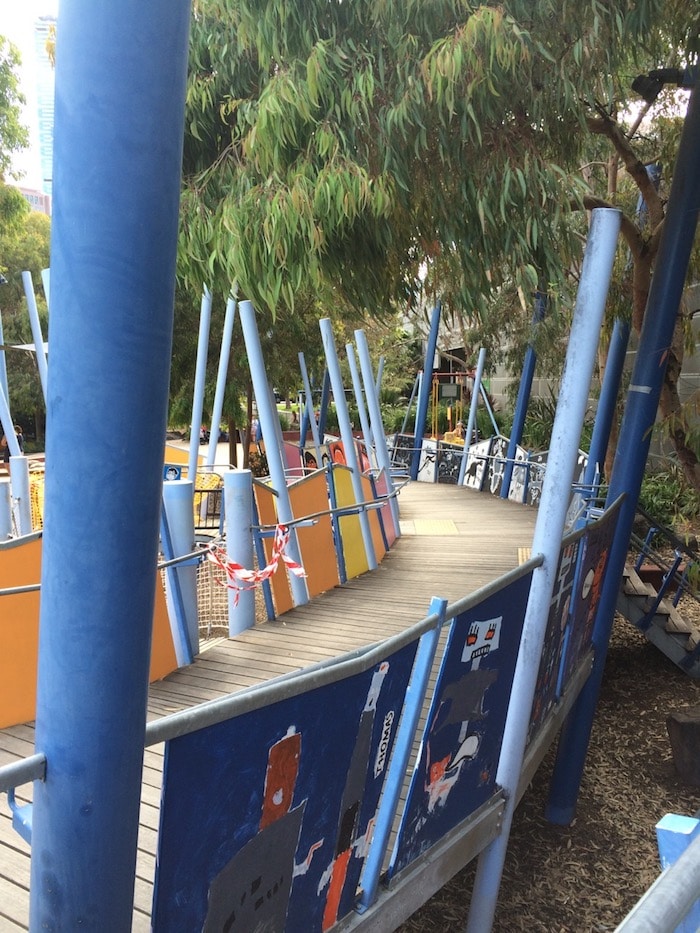 Sadly, graffiti is an ongoing problem. 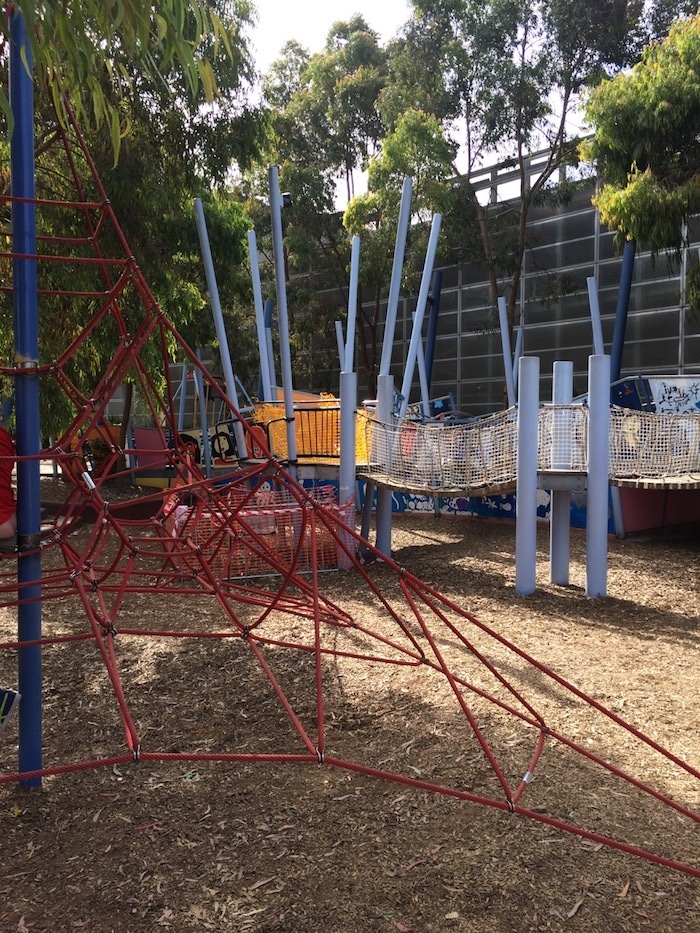 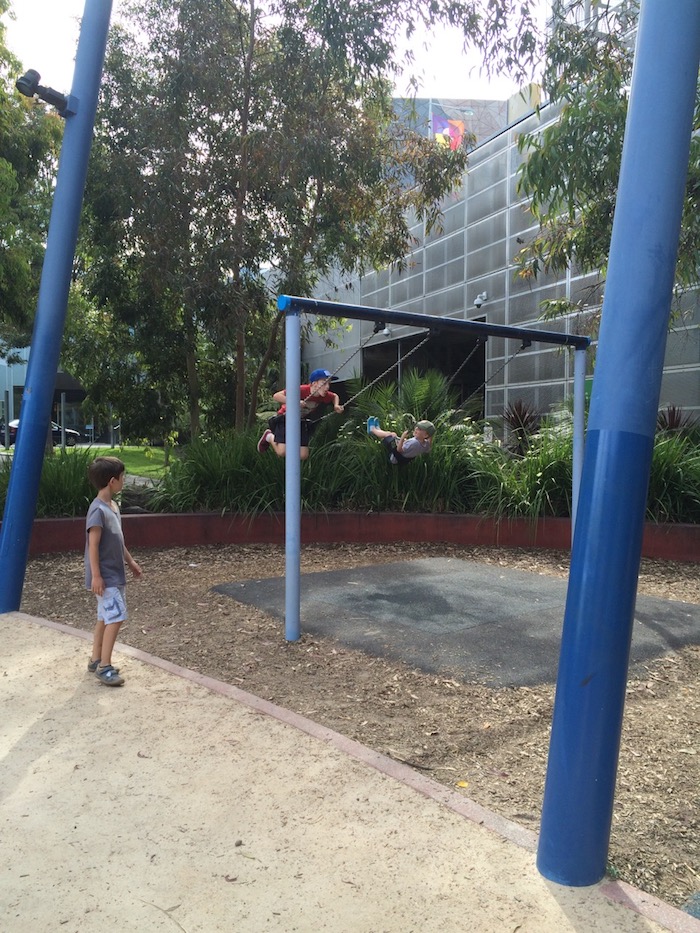 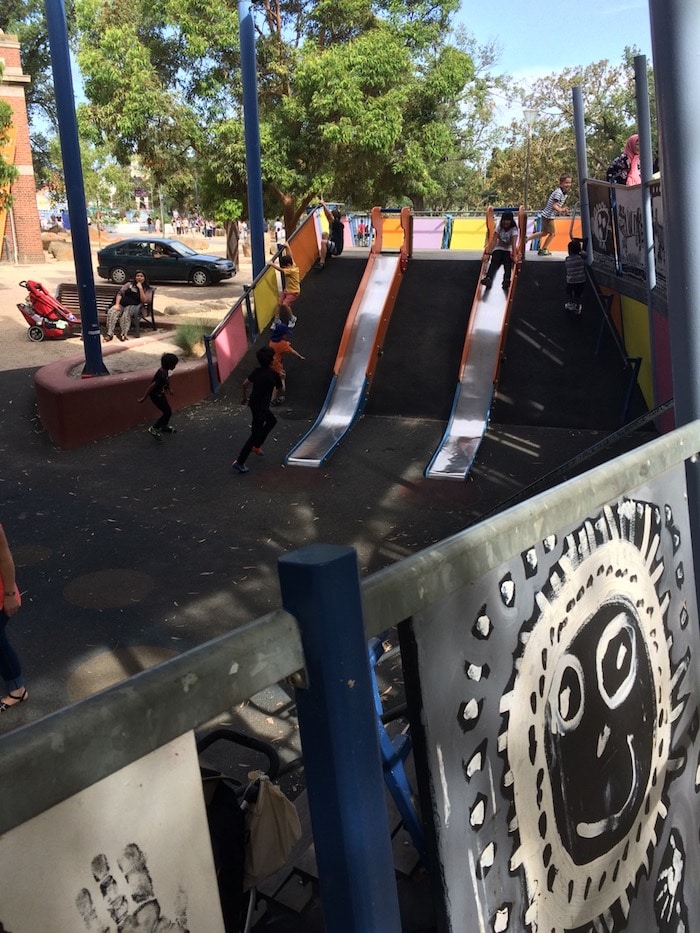 Kids can race each other down the two super-slippery tube hill slides. 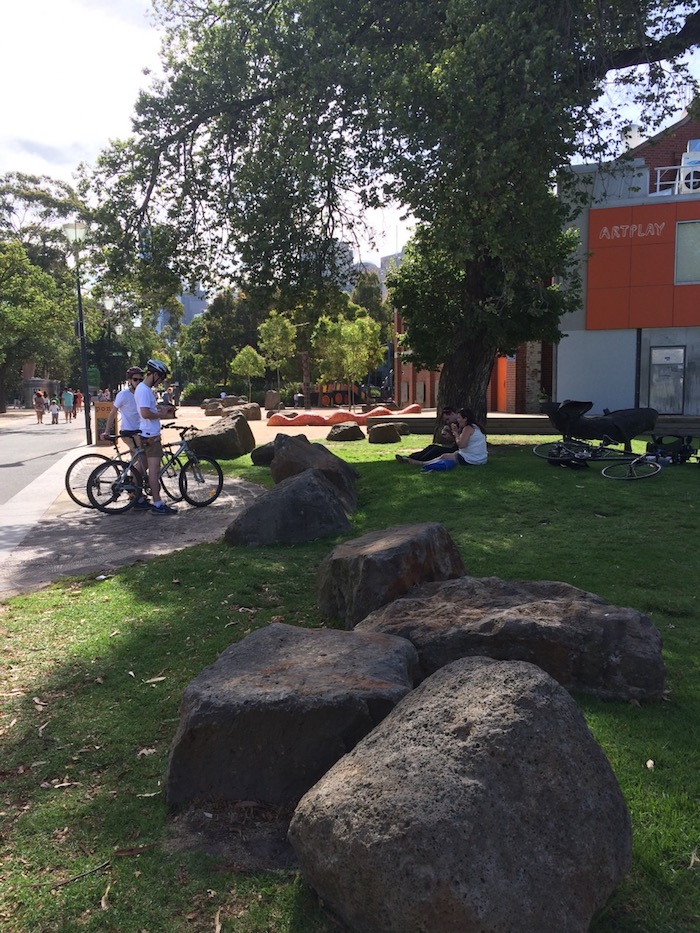 It’s a top spot to stop for a play when you are riding bikes around Melbourne too. 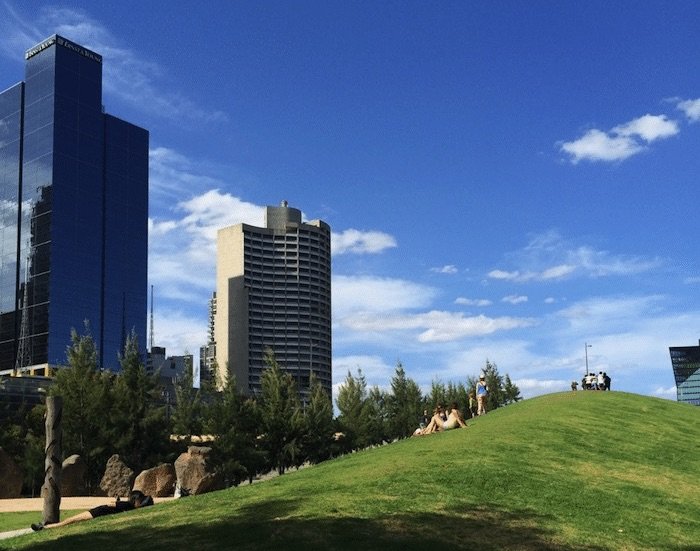 Things to Do at Birrarung Marr Melbourne

This Melbourne park is one of our favourites.

It’s hard to believe it is in inner city Melbourne, as it’s peaceful and there’s LOTS OF SPACE to relax on the grassy fields, or ride bikes.

Being riverside brings a cool breeze.

There’s also lots to do here. 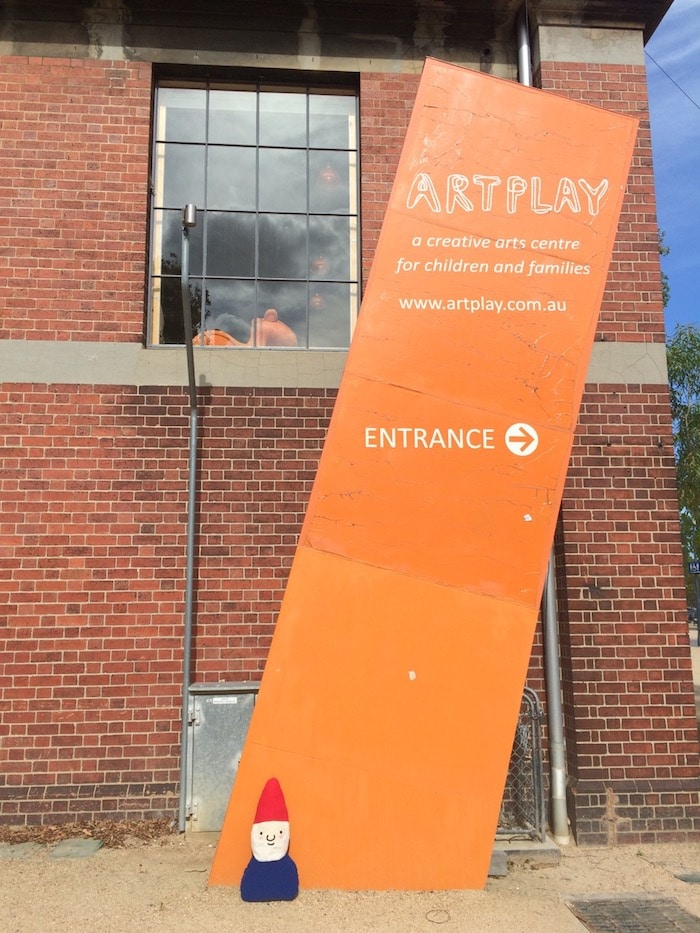 One of the last remaining structures from the Jolimont Rail yards, this heritage building has been converted into a children’s art and cultural centre called ArtPlay.

Opened in 2004, children from babies to 12 year olds, and their families, can join in creative arts workshops on weekends, and during school holidays.

With over 300 workshops, events and performances a year, with teachers from a variety of cultures and backgrounds, you will definitely find something fun to do.

Bookings are required for most workshops, however there are also free drop-in events available. 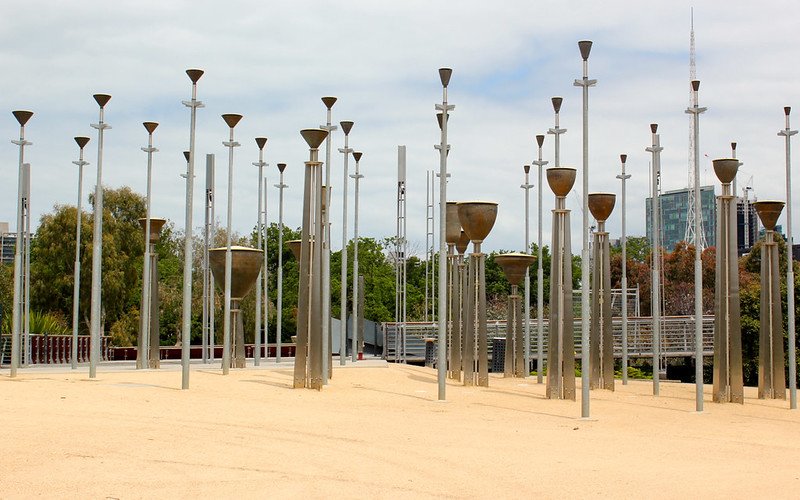 You’ll hear the Birrarung Marr Bells before you see them.

The Federation Bells sit on the middle terrace and you access them via the ramp.

There are 39 inverted bells, and they sound something like a church bell symphony. Controlled automatically by a computer, they play a range of compositions.

The best bit? You can download a player from Federation Bells and compose and submit your own works online! 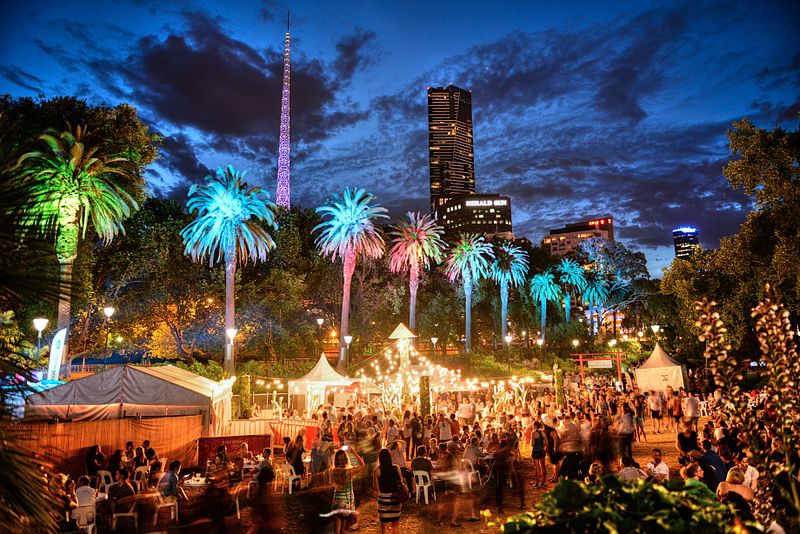 Get on down to Melbourne’s annual Asian Noodle market at Birrarung Marr.

Here’s some of the noodle market stalls you’ll find: 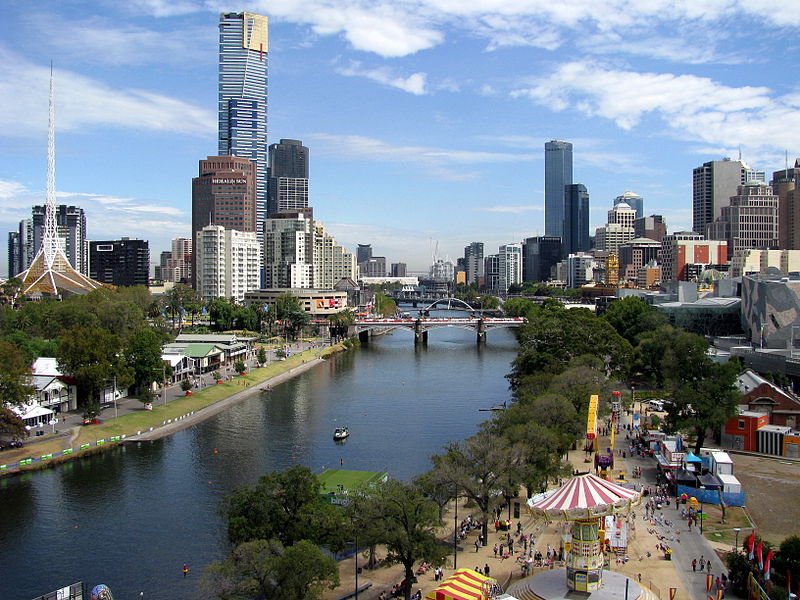 Federation Square Flinders Street amphitheatre nearby, also hosts the 7Tennis Australian Open live, showing all the matches live on screen from the comfort of deck chairs, cushions and beanbags. 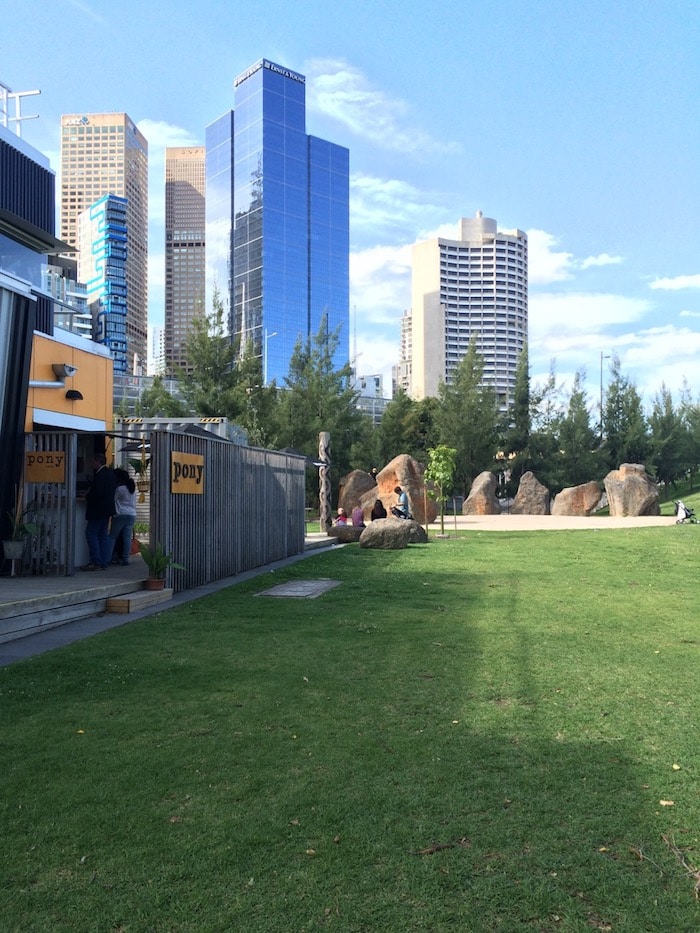 Where to eat at Birrarang Marr

The best bet to find food close by is to find the food trucks near Federation Square.

Head to Chocolate Buddha Japanese restaurant, or Taxi Kitchen for more substantial meals, both in the Federation Square area.

Tower Sushi, in front of Flinders St Station, is another good bet for kids.

Why is Birrarung Marr sacred?

This site is a traditional one because of the ceremonial importance that it conveys. Individuals from various tribes come to this location to perform a Tanderrum which is a large gathering/celebration.  (Source)

What is the proper Birrarung Marr pronunciation?

This is how to pronounce Birrarung Marr is: 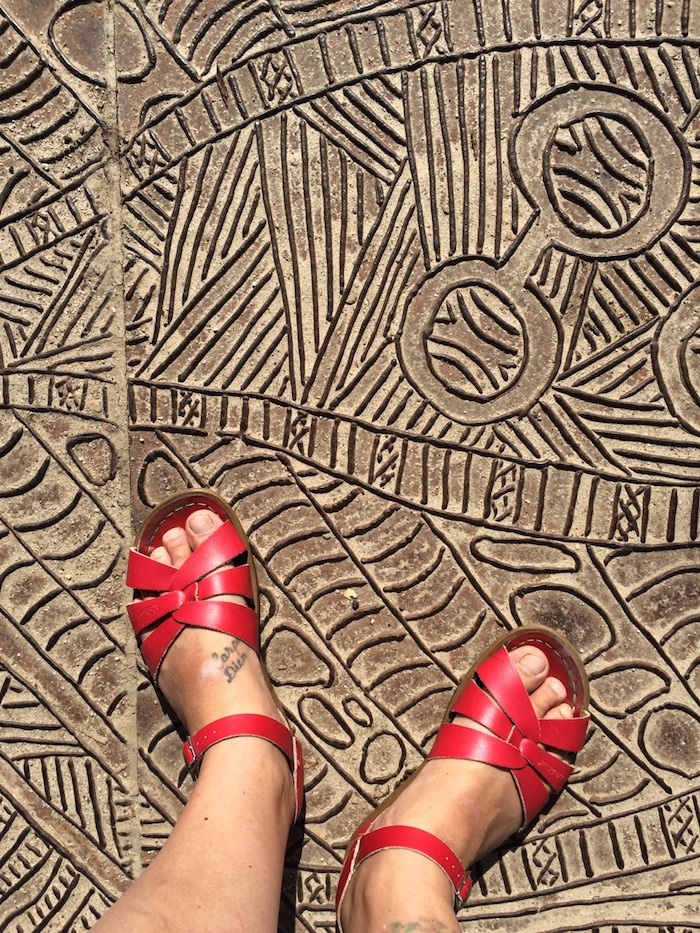 THE INSIDE SCOOP: Birrarung Park

What does Birrarung Marr mean?

“River of mists” and “river bank” in the Woiwurrung language of the local Wurundjeri people. 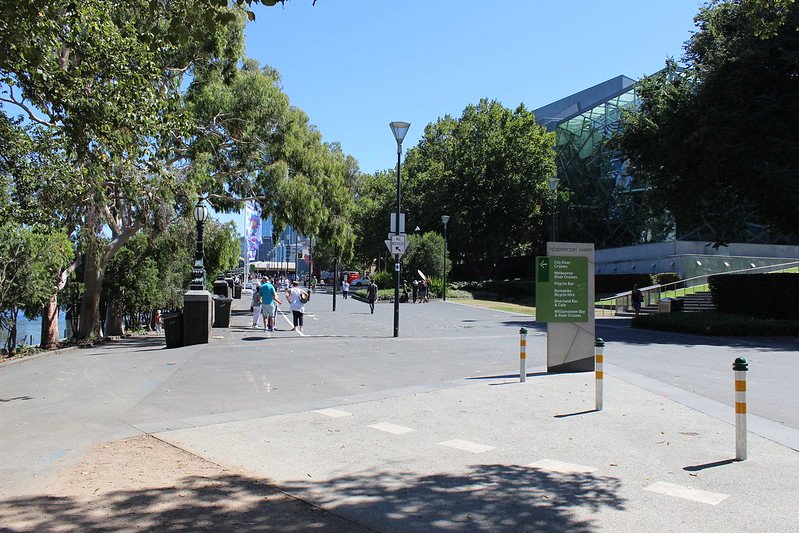 Where is Birrarung Marr Melbourne?

The park lies south-east of the Melbourne CBD, between Flinders street and the north bank of the Yarra River.

How to get to Birrarung Marr in Melbourne

By Tram: Disembark at Federation Square/Swanston Street, and walk along Princes walk until you find the playground

By Car: Click here to add your location for directions on google maps

By Foot: Birrarung Marr is directly behind Federation Square and you can walk to the playground and ArtPlay via the Flinders Walk riverside trail from the city.

Car parking at Birrarung Marr can be hard work.

Our last visit, we scored a park near the William Barrack Bridge, and walked in via the bridge.

Facilities at Birrarung Marr in Melbourne

It’s not a playground we’d go out of our way for.

But if you are in the city, it’s only a hop skip jump to get there along the riverbank, and give the kids 30 minutes of outdoor exercise after lunch.

Looking For More Things to Do in Melbourne with Kids?

Click the blue links below for more Melbourne attractions for kids.

6 OF THE BEST ANIMAL ATTRACTIONS IN HONG KONG WITH KIDS!
← Previous
YARRALUMLA PARK - EVERYTHING YOU NEED TO KNOW GUIDE
Next →
Click here to cancel reply.