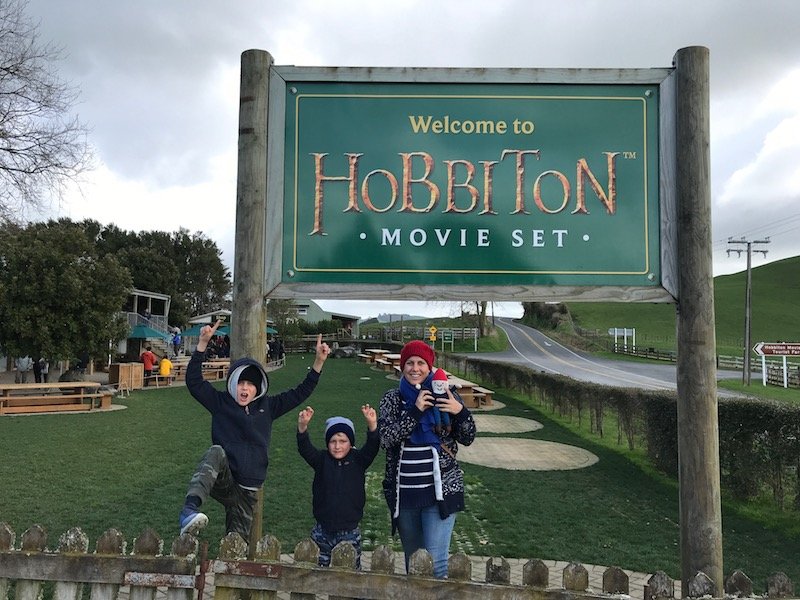 INSIDE: Roam the Gnome’s Ultimate Guide to Hobbiton Movie Set.

30% of visitors to Hobbiton Movie Set have NEVER seen the films!

Want some more facts about the 12 acre set of Hobbiton?

5% is fake, mostly the stuff on tables and in wagons.

(Your challenge when visiting Hobbiton is to see if YOU can spot the fakes!)

30 – that’s THIRTY – cameramen (and camerawomen) and their equipment can fit inside Bilbo Baggins Hobbit Hole.

It’s the largest on the farm.

When Gandalf looks out the window to see the sunset, the hobbit hole was facing the wrong way.

So Sir Peter Jackson filmed sunrise, and played it backwards!

There’s plenty more facts and intrigue to be found on a Hobbiton Tour of Middle Earth.

Planning a visit to Hobbiton? Read on! 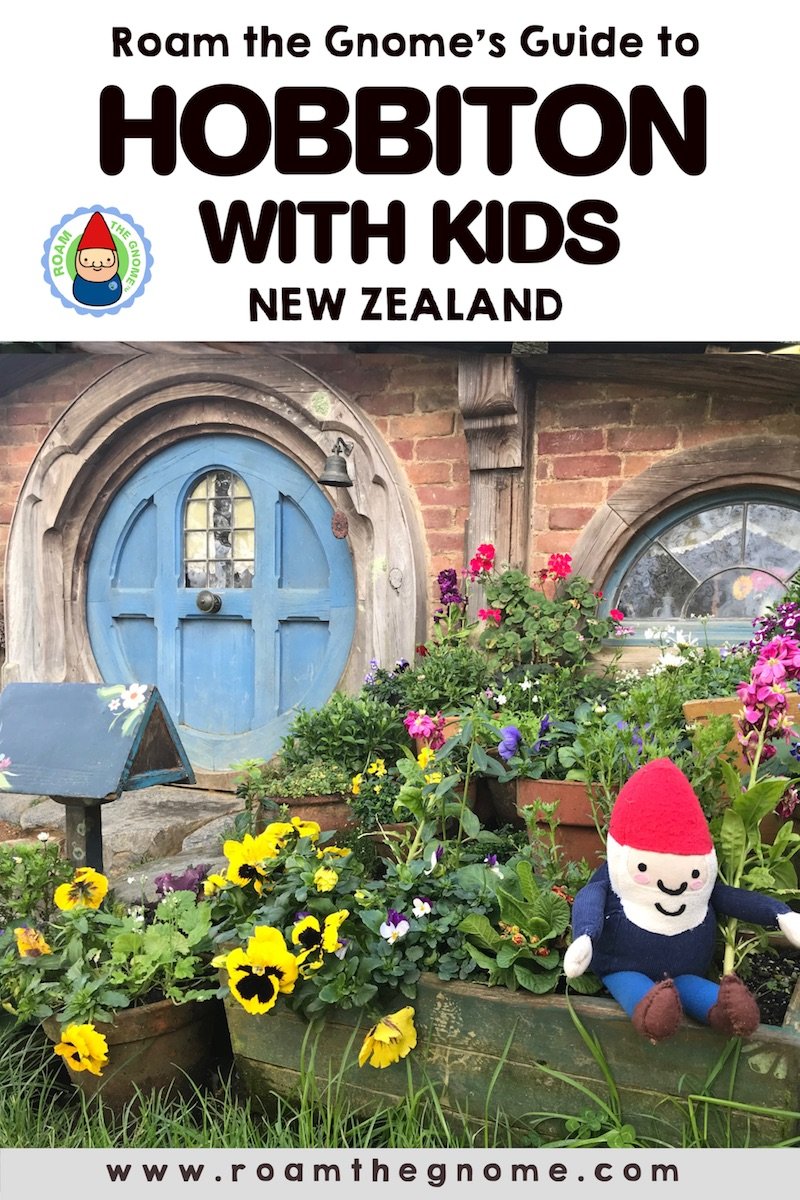 Hobbiton New Zealand Tour – Self Drive to The Shire

The wander around Hobbiton and the Shire starts for self-drive tour participants at the Shire’s Rest Cafe, a 15 minute drive from Matamata i-SITE.

This super cute Tourist Information building in Matamata town is Hobbiton-themed too!

There’s plenty of free parking at Hobbiton for cars and RV vans where you can leave your vehicle for the duration of your tour.

The cafe and ticketing centre is open 7 days a week, from 9am to 4.30pm with extended hours in summer. 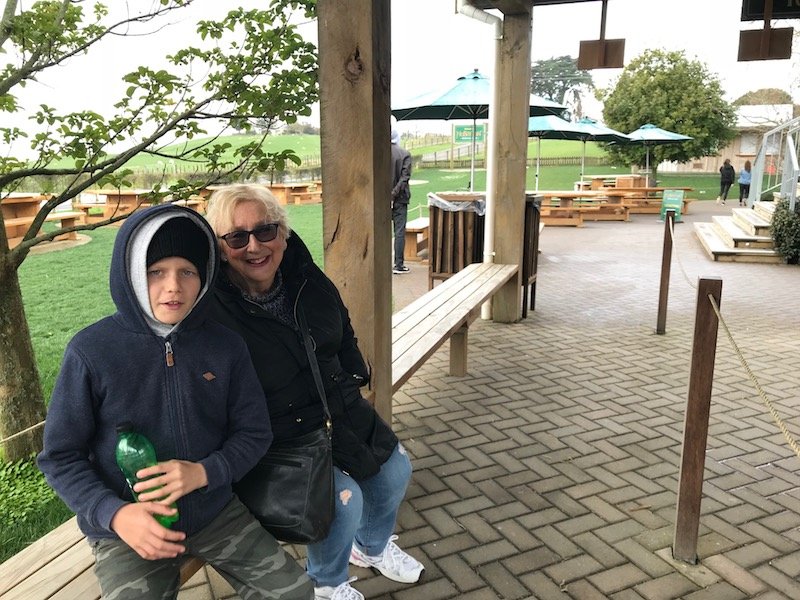 HOT TIP: Book your Hobbiton tickets in advance BEFORE you drive all the way there.

This is a best selling tourist destination in New Zealand, and there’s NO guarantee of availability at the door, especially in the busy months of summer and spring.

In fact, book as early as you can to secure the date you want.

Two friends have recently taken my advice, and could not believe how close they came to missing out when looking at the lack of tour availability on the day they wanted to visit. 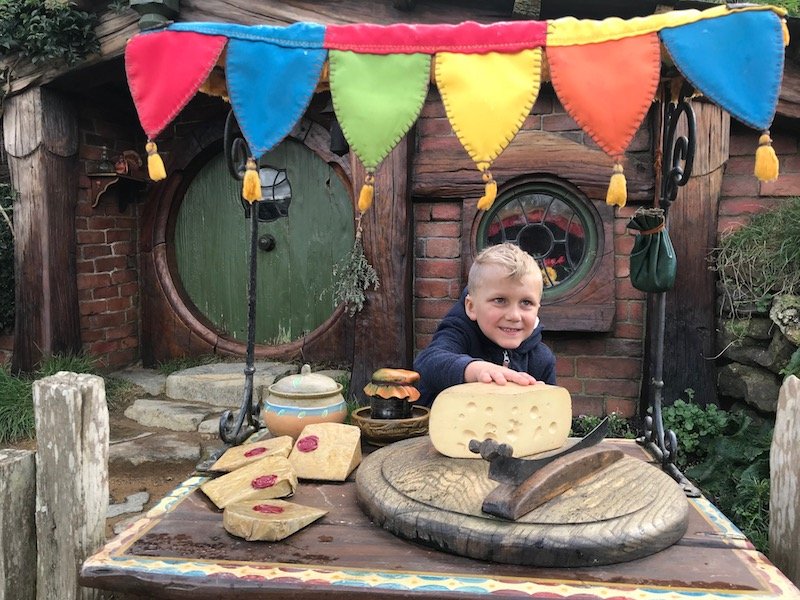 Did you know you can also book a Hobbiton Movie Set Guided Tour that includes a FESTIVE BUFFET LUNCH?

First you’ll experience the magic of Hobbiton on a Hobbiton walking tour of the movie set grounds. Next, you’ll sample one of the special Hobbiton drinks when you head INSIDE the Green Dragon Inn.

Lastly, you’ll feast on a festive lunch of delicious Hobbit approved dishes, including Kiwi classics and Hobbit family favorites in the Party Marquee.

The Meeting point for this tour is at Shire’s Rest at 501 Buckland Road, Hinuera Matamata. 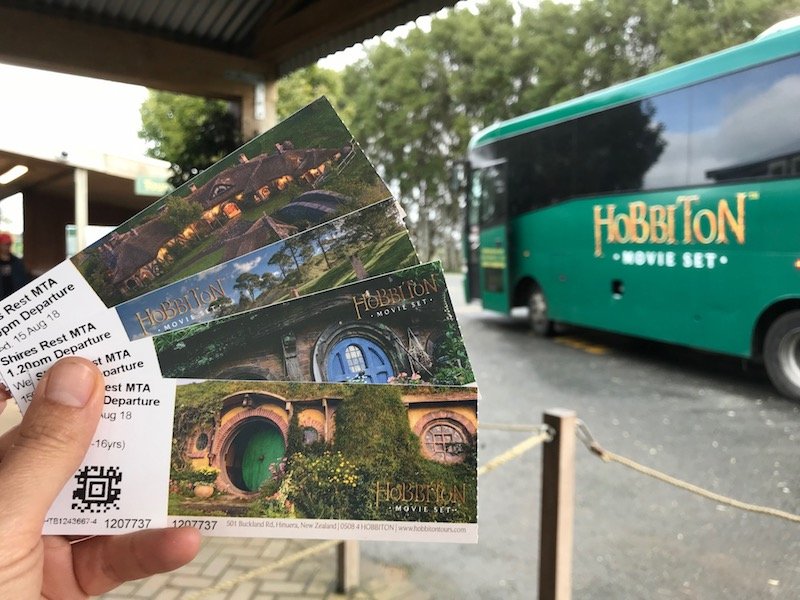 Hobbiton Buses from Matamata and Rotorua

If you are travelling New Zealand by public transport, catch the Hobbiton Tour bus from either the i-SITE at Matamata, or the Hobbiton Shop in Rotorua. 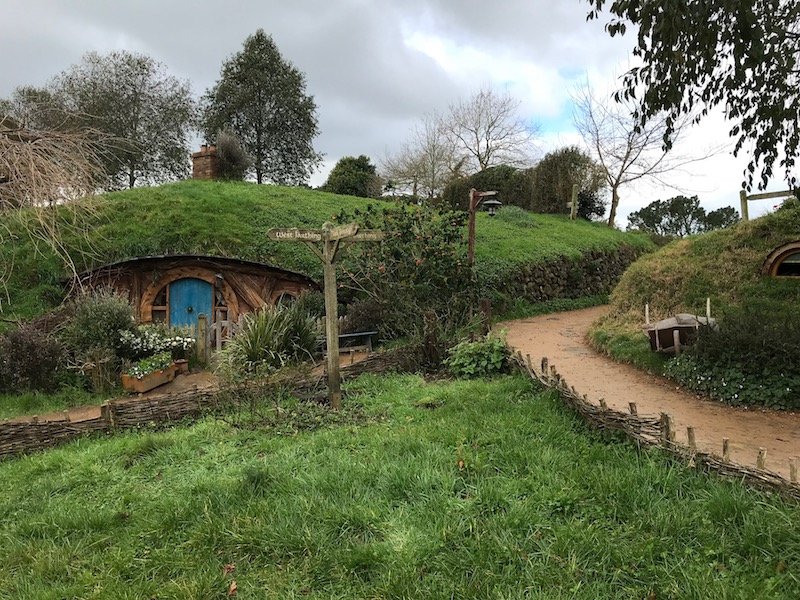 Hobbiton Tours from Auckland and Hamilton.

You can also visit the Hobbit village on a Hobbiton tour from Auckland.

Hobbiton day tours are run by a bunch of different tour companies, offering different itineraries including one that heads to Hot Water Beach on the Coromandel Peninsula and another that returns via Waitomo Caves.

Pick the one that suits you best.

How long is it from Auckland to Hobbiton? The drive is about 2 and a half hours.

BOOK NOW: Secure your place on a Hobbiton Tour from Auckland (via Get Your Guide) 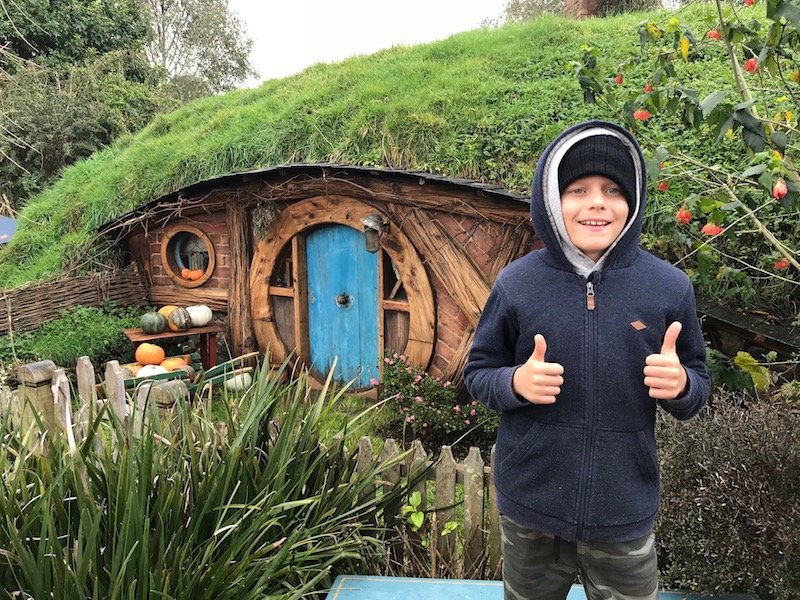 From Shires Rest, you travel by bus (either one of official green Hobbiton buses, or with your coach tour) through the gates and INTO the boundaries of the Hobbiton Shire.

There’s no other way in.

The drive takes you through the rolling hills and green pastures of the Alexander Farm.

Spotted by Sir Peter Jackson and his team during an aerial search for suitable film sites, the lush scenery proved irresistible. 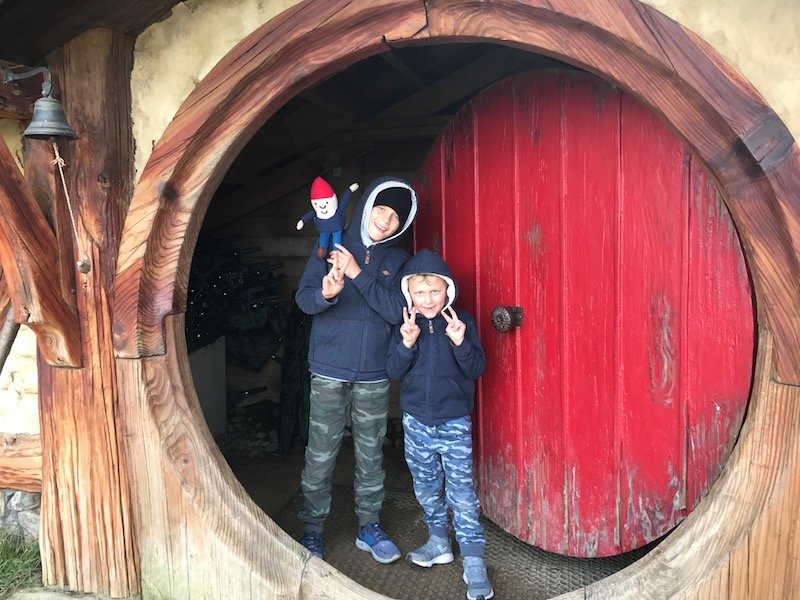 Soon enough, you reach your destination and head into the Shire on foot.

It’s not long till you spot your FIRST Hobbit hole.

The burning question on everyone’s lips: ‘Can we go inside’?

I’ll let you in on a little secret.

Most of the Hobbit holes are cute whimsical facades only, but there is one Hobbit hole photo opportunity where you can see inside for yourself! 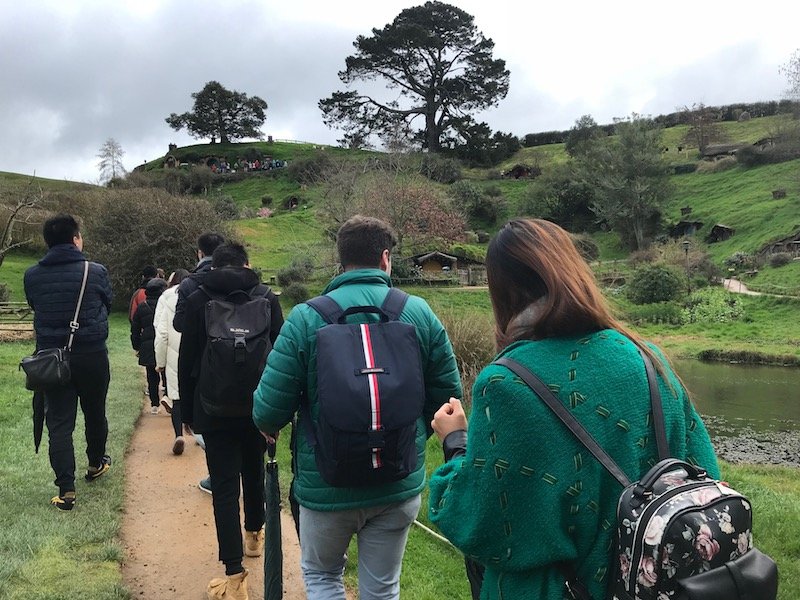 Wander the Hobbiton Movie Set on a Hobbiton Tour

The Hobbiton tour is led by a guide, who orchestrates the group to meander through the Shire at a moderate pace.

As you wander, you’ll see many, many groups ahead of and behind you.

Somehow it’s not too bad, as you are spaced out and never intrude on one another.

Stay close to the guide as you wander the Hobbit setting and hear all the stories, a well-rehearsed humorous spiel filled with interesting titbits of history and Sir Peter’s filmmaking antics. 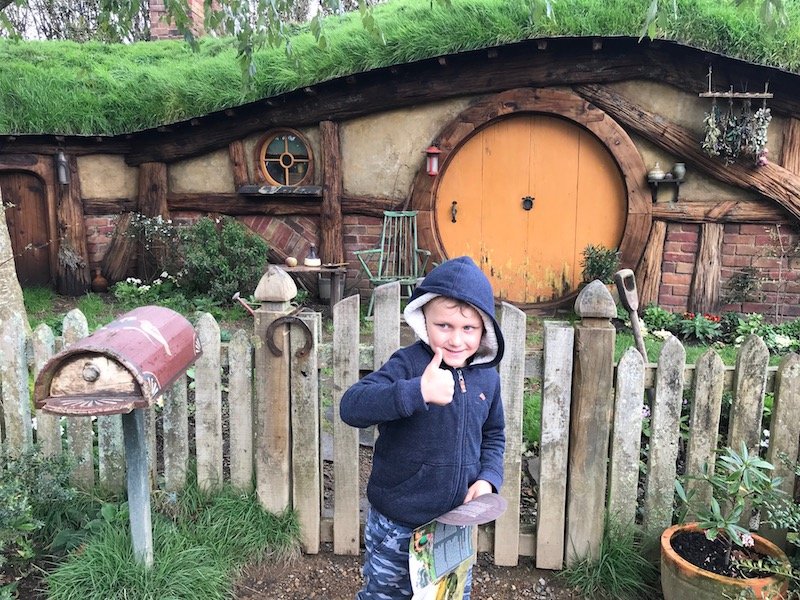 There’s plenty of time for photos and selfies in this super cute Hobbit shire.

Take a selfie in front of a Hobbit door.

It’s the stuff of dreams. 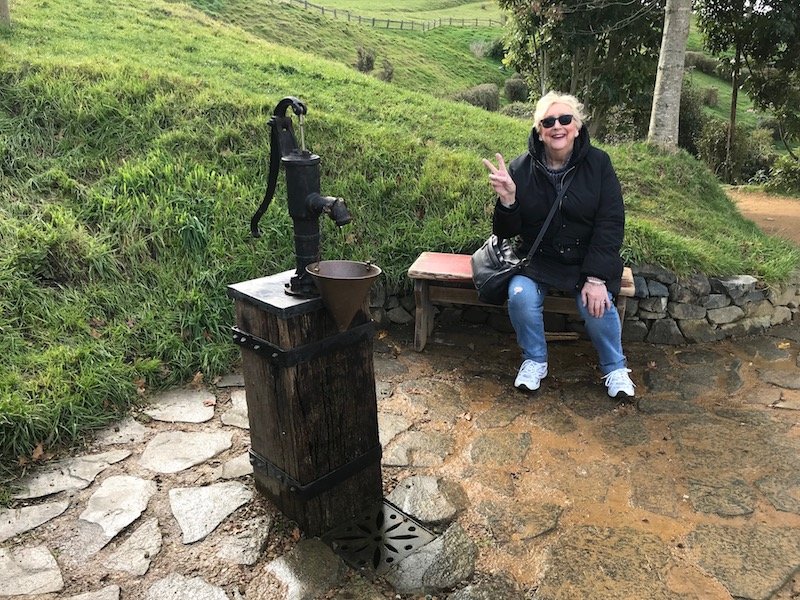 Be prepared for a slog up a slippery slope as you head up the hill towards the giant (fake) Oak Tree, back towards the Mill, and over water to the elegant Green Dragon Inn.

Luckily, there’s a few places to sit down and rest when you need to catch your breath. 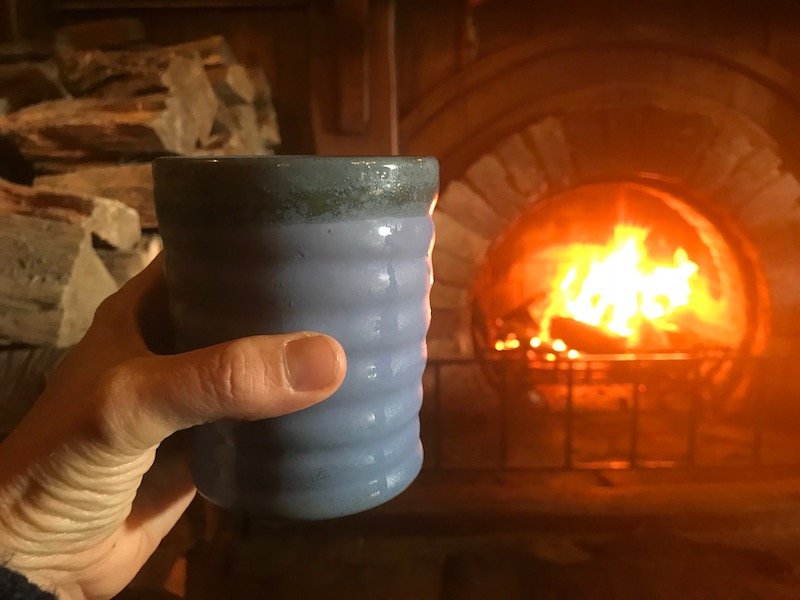 End the tour with a complimentary glass of one of Hobbiton’s own exclusive drinks – brewed ales, apple cider or non-alcoholic ginger beer.

We nabbed chairs by the fire, enjoying the picturesque elf-like surroundings of this enchanting pub.

Be quick if you want to eat something from the snack menu at the Green Dragon™ – you have about 20 minutes to wolf it down.

It’s our only complaint about the tour.

20 minutes in the Green Dragon is simply not long enough to soak up the magic! 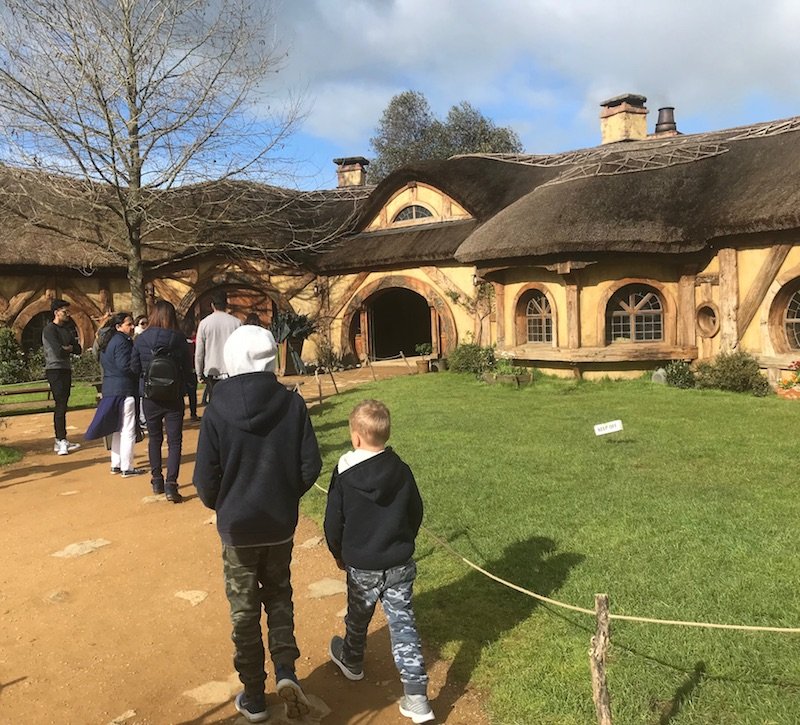 If eating a decadent meal in the Green Dragon Inn at Hobbiton is on your bucket list, join the Hobbiton Evening Banquet Tour for a banquet feast fit for a Hobbit, or a King.

This Hobbiton Movie Set events tour includes an exclusive look at Hobbiton at night, and a secret celebration too.

Evening Banquet Tours depart four times per week on Sunday, Monday, Tuesday and Wednesday evenings all year round, with additional departures subject to demand over summer. 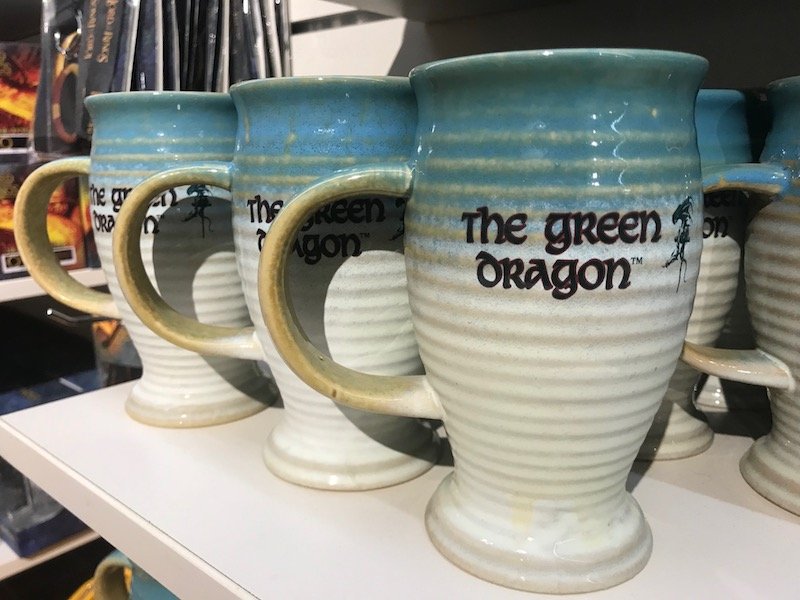 Have a look at some of the Hobbiton souvenirs you can buy in the Shire Store and Hobbiton Gift shop at the end of the tour.

There’s a tonne, including exclusive Hobbiton souvenirs and Hobbit memorabilia, including Hobbit ears! 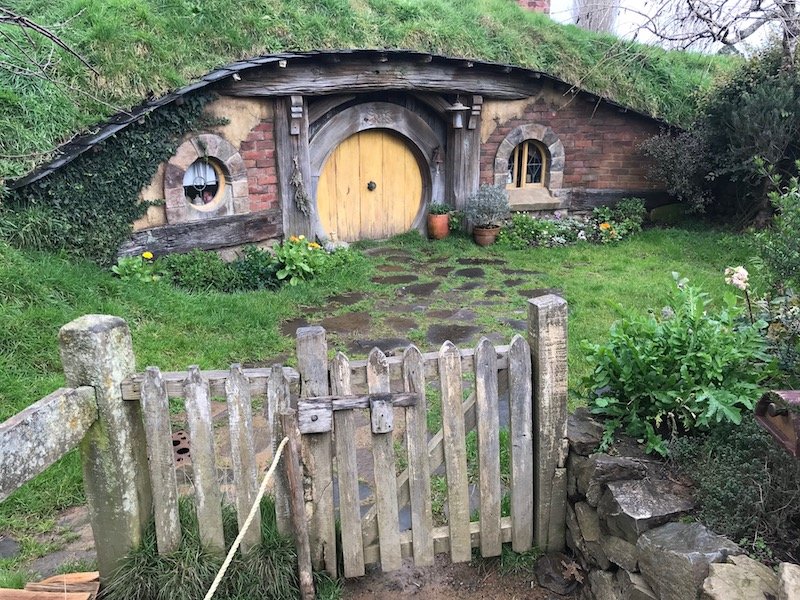 If you want to find accommodation near Hobbiton, check out these Hobbiton farm stays.

Or if you desperately want to sleep a night in your very own Hobbit Hole, book one of these two Hobbit Hole hotel rooms at Woodlyn Park.

(You can also sleep in a Bristol Freightor plane, in a train carriage, or on a landlocked ship at Woodlyn Park motel too!) 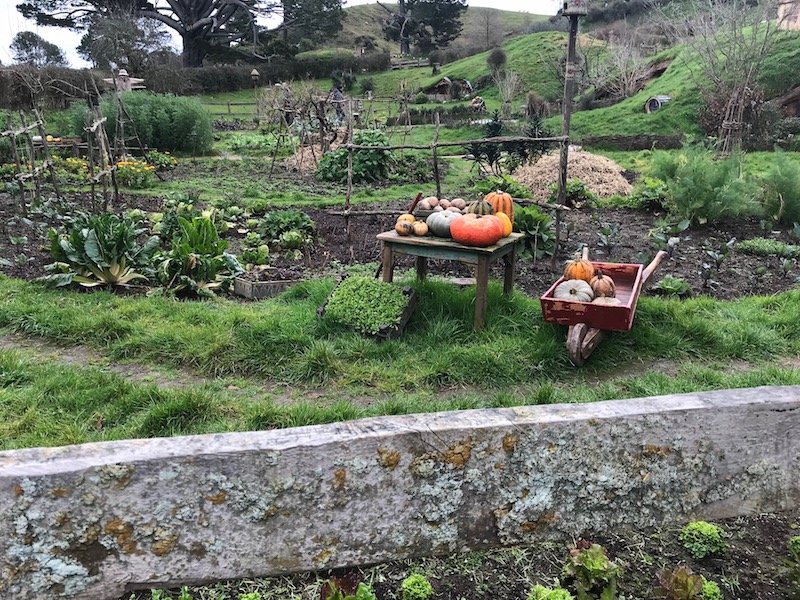 Where is Hobbiton in New Zealand?

Wondering where in New Zealand is Hobbiton?

Hobbiton is an hour north-west of Rotorua, 15 minutes drive into the hills from the main town hub of Matamata.

It’s in the centre of the North Island, between Auckland, Rotorua, Waitomo, and Hamilton. 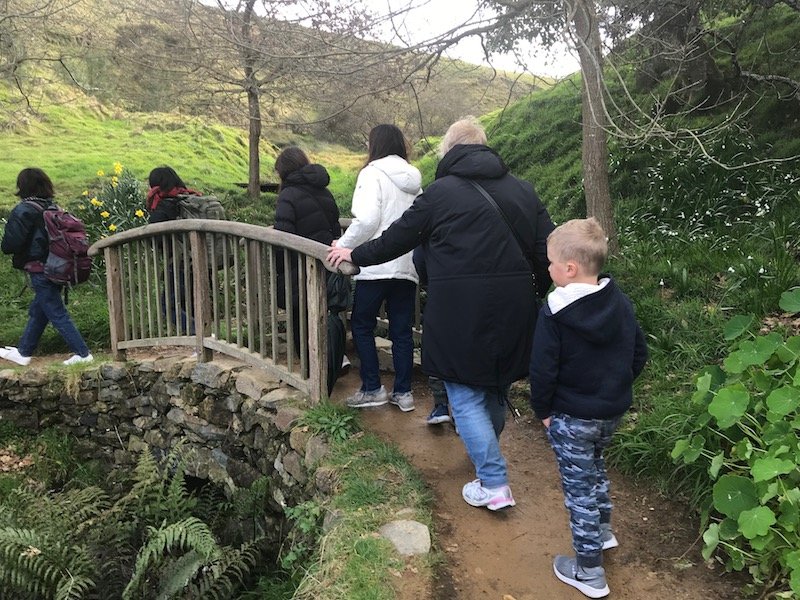 Where was the Hobbit filmed?

The Hobbit was filmed throughout New Zealand, on both the North and South Islands.

The Hobbit movie set was constructed on this land near Matamata, and remains in place for visitors to check out.

Can you go inside a Hobbit House?

You can go inside one of the Hobbit houses. The one with the red door. (See main picture).

But it’s just a photo opportunity.

There’s just rammed earth walls and storage areas behind it.

(Some say 44, but that’s not the official word)

You get to pick your favorite! 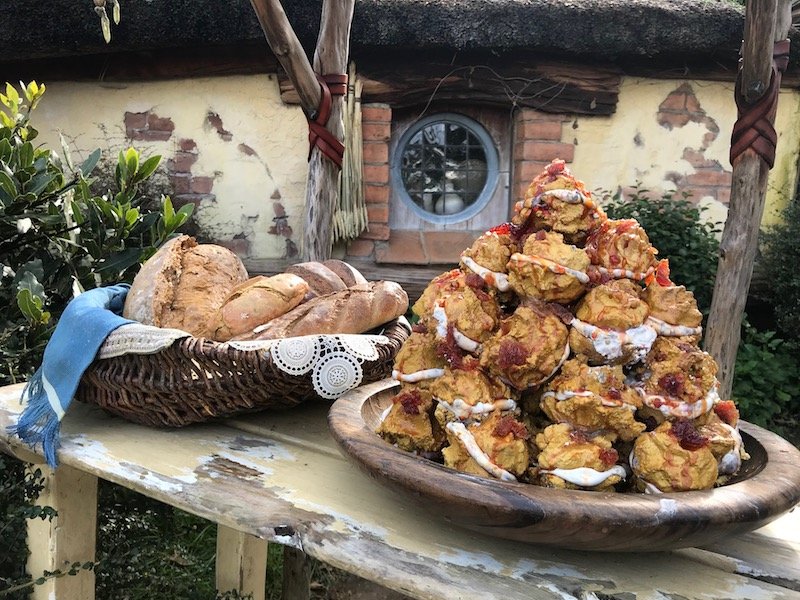 How many Hobbit movies are there?

There are 3 Hobbiton™ movie films.

How many Lord of the Rings movies are there?

Are they still filming at Hobbiton?

Tours to Hobbiton are the only way in now.

The Alexander Family, who own the farm on which the movie set was established, in partnership with Sir Peter Jackson.

More than 800,000 people have visited since Russell Alexander conducted his first tour, back in December 2002. 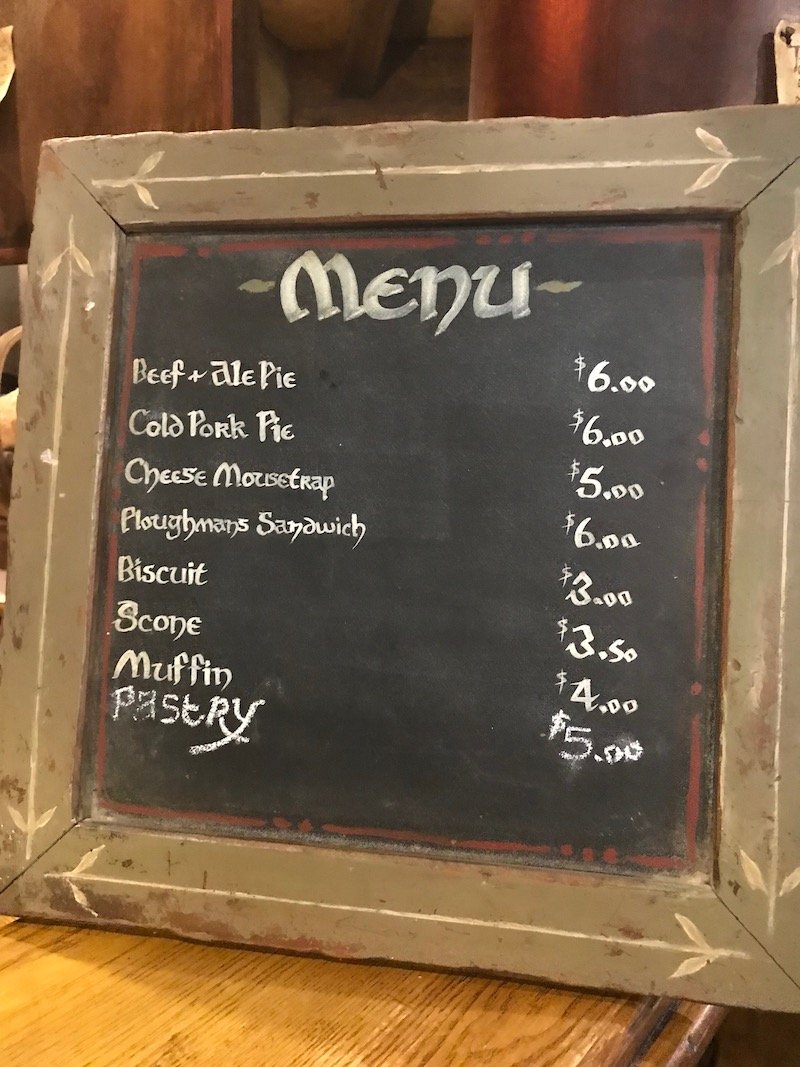 THE INSIDE SCOOP: Visit Hobbiton in Matamata 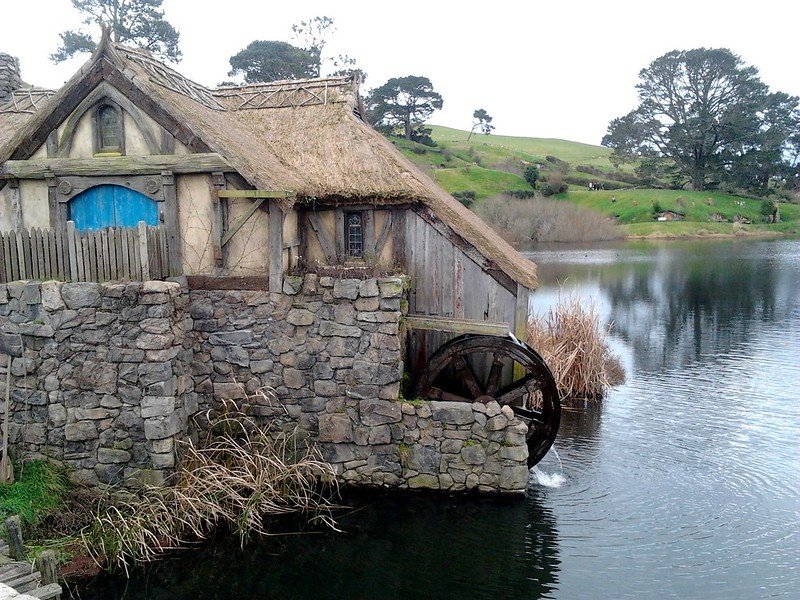 Image credit: Karina Salas F. via Flickr via CC BY 2.0

Hobbiton from Shires Rest or Matamata

(You must book a ticket for everyone in your party, including kids under 8 to secure a seat on the bus.)

Book Shire’s Rest if you are self-driving direct to the Hobbiton ticket office there – it’s across the road from the entry gates, or from Matamata if you don’t have independent transport from Matamata.

Add a Meal to your Tour Booking

Add a meal to your tour.

Festive feast lunch costs an extra $36 per person for anyone 9 years and above.

A breakfast feast is $26 NZ per person extra for anyone 9 years and above. Book meals at the same time as you book your Hobbiton tickets. 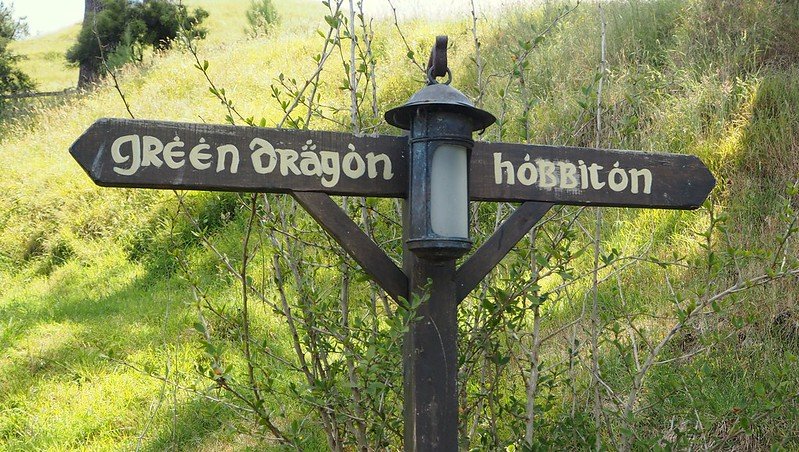 How long is the Hobbiton Tour?

The tour runs for approximately 2 hours if you depart from Shires Rest.

3 hours including transport from Matamata, and 4.5 hours return if you depart from Rotorua. 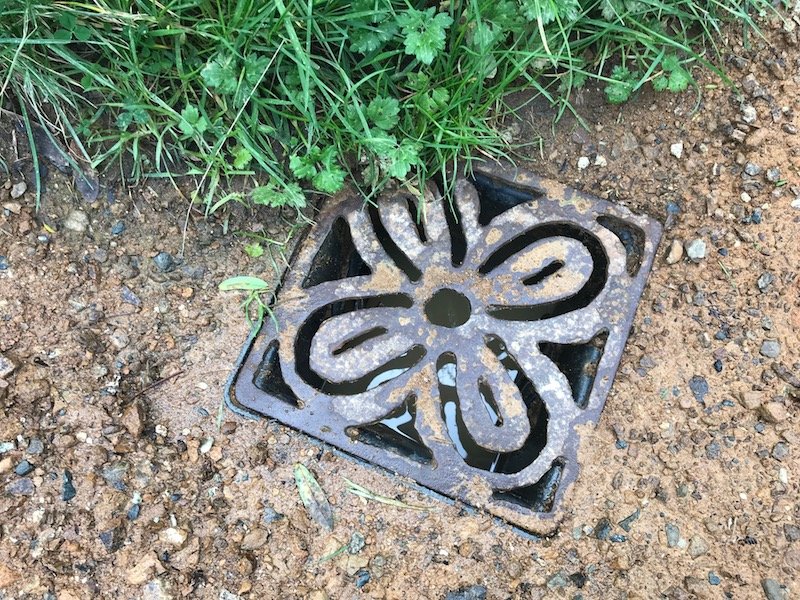 Where to buy Hobbiton Tickets

Book Hobbiton tickets now through Get your Guide.

It’s the easiest way to guarantee your spot so you don’t miss out.

You can also buy Hobbiton tickets online from the offical site to secure your spot, or in person when you arrive in New Zealand at the Matamata i-SITE, The Shire’s Rest ticketing office, or the Hobbiton Rotorua store.

The only way to access the Hobbiton Movie Set and see the hobbit houses in New Zealand is with a fully guided walking tour. Please arrive 15 minutes early to your departure point to avoid missing the bus.

Pre-booking your Hobbiton tour is essential.

Tours can sell-out well in advance so please pre-book to avoid disappointment. 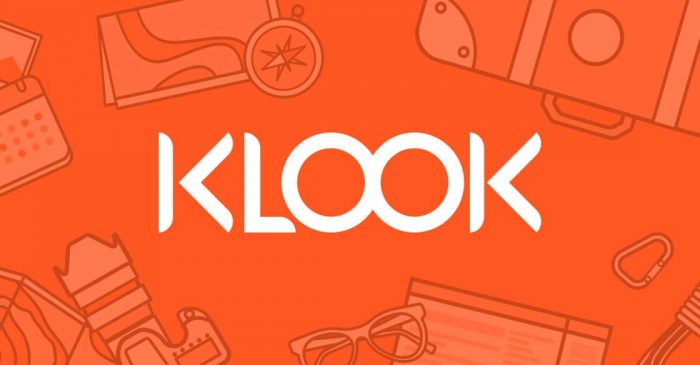 Is there a Hobbiton discount code?

You could try Klook, or GrabOne in New Zealand (a reputable discount tour agency)

Compare your prices before you buy. 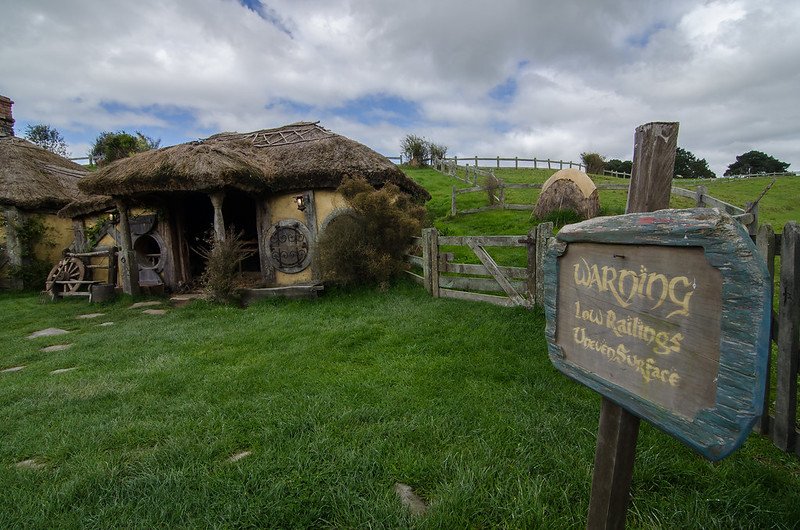 Image credit: Tom Hall via Flickr via CC BY 2.0

We’ve been unsuccessful in finding a current Hobbiton promo code to use at Hobbiton, or any other Hobbiton deals.

Your best bet for discount entry is through one of the Group Buying sites listed above. 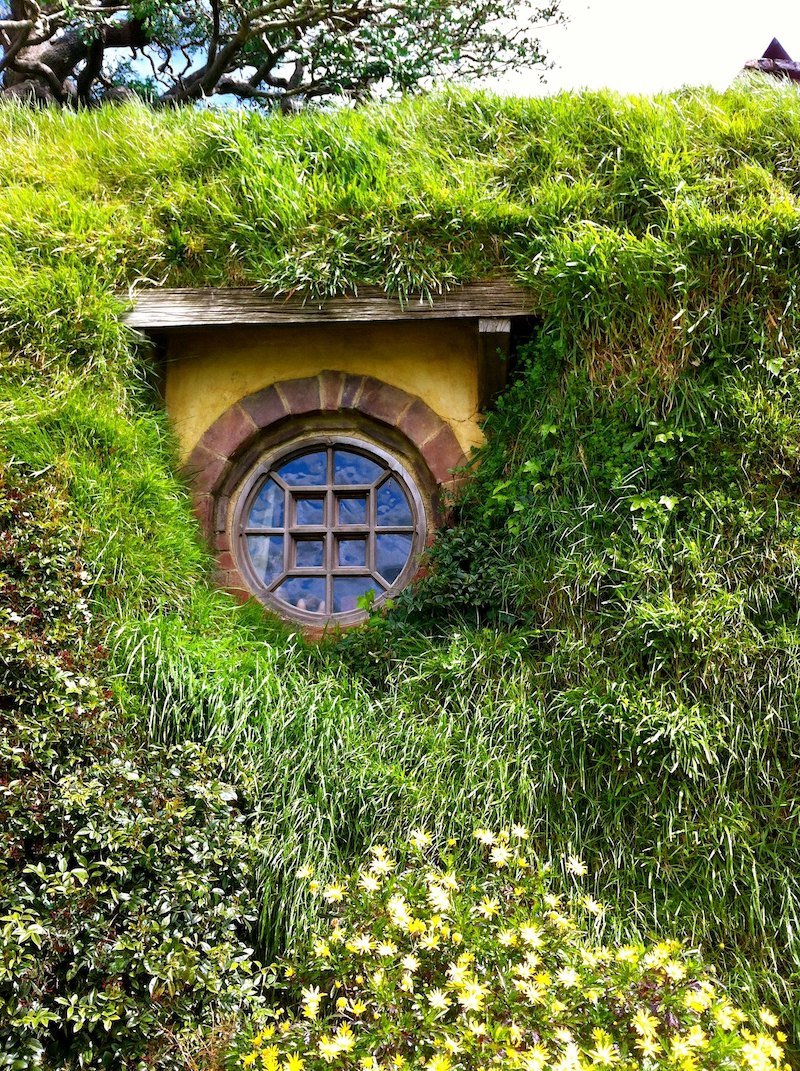 This is the window from which Sam spied on Frodo at Bag End.

Image credit: Maria Nayef via Flickr via CC BY 2.0

Is the Hobbiton Movie Set Tour worth it?

A zillion visitors will agree with me.

It’s definitely worth it.

You can’t see anything like it anywhere else in the world. 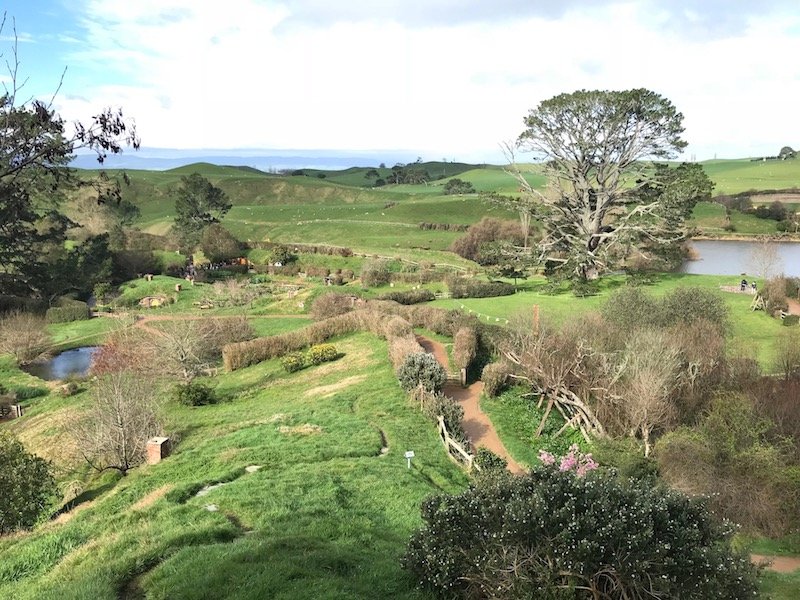 How to get to Hobbiton

All you need to know about how to visit Hobbiton movie set.

By Self Drive Car:

Parking: Free parking onsite at The Shire’s Rest for cars and RV vans.

How long does it take to drive to Hobbiton?

New Zealand weather is extremely changeable. Bring raincoats or wind jackets just in case. Hobbiton provides giant umbrellas for the walking tour. These must be shared between two.

This is the entry road in to Hobbiton

Toilets: Yes, including baby change table, at the Shire’s Rest. More toilets at the Green Dragon Inn. No toilets in Hobbiton Shire, so make a quick stop before you embark on your tour.
Disability access: Yes
Closest ATM: Credit cards and EFTPOS accepted at Hobbiton cafe and stores
Ground cover: Can be slippery when wet. Wear good walking shoes.
Picnic tables: Yes, at the Shire Cafe.  Click here for the menu.
Dogs: No
Notes:  Hobbiton was last reviewed in 2019.

More fun than we ever imagined!

Looking for More Things to Do in New Zealand for Kids near Matamata?

Click the blue links below for more things to do in Rotorua, Auckland, Waitomo and Taupo. 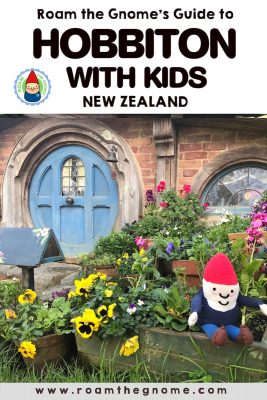