INSIDE: Roam the Gnome’s EPIC Guide to the Princess Diana Memorial Playground, a tribute to the story of Peter Pan & Neverland.

You’ll hear the twinkling of musical chimes, and bucketloads of children’s laughter before you catch a glimpse of the Princess Diana Memorial Playground in Hyde Park.

And then, through the tops of the trees, you’ll spy it.

The centrepiece of the Lady Diana Memorial Playground.

Fun Fact: Did you know over 1,000,000 visitors enjoy this free playground each year? WOW!

There’s lots of reasons why. Take a look below to find out more. 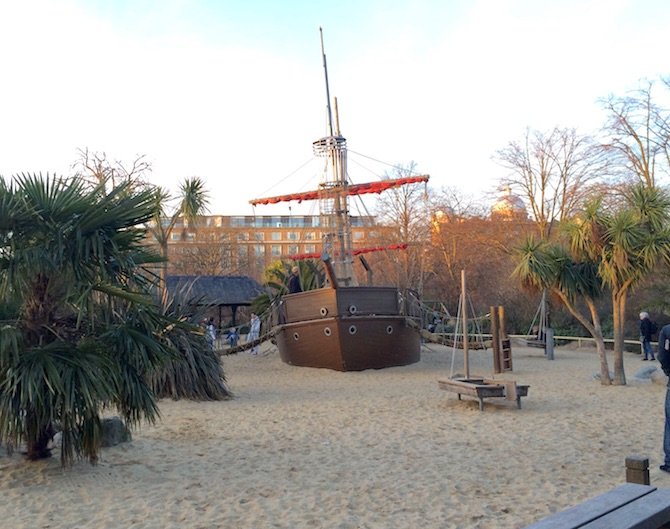 The Princess Diana Playground in Hyde Park London is tucked away in a far corner of the grounds, on the Bayswater Road side of the park, just five minutes walk from Queensway Tube station.

The design of the Pirate Ship playground (formally known as the Diana, Princess of Wales Memorial Playground but also known as the Peter Pan Park London) was inspired by the stories of Peter Pan and Neverland.

We’ll try and answer all your questions about both the playground and the woman it was named for, including:

RELATED: The Ultimate Guide to the BEST London Playgrounds for Kids (NEW) 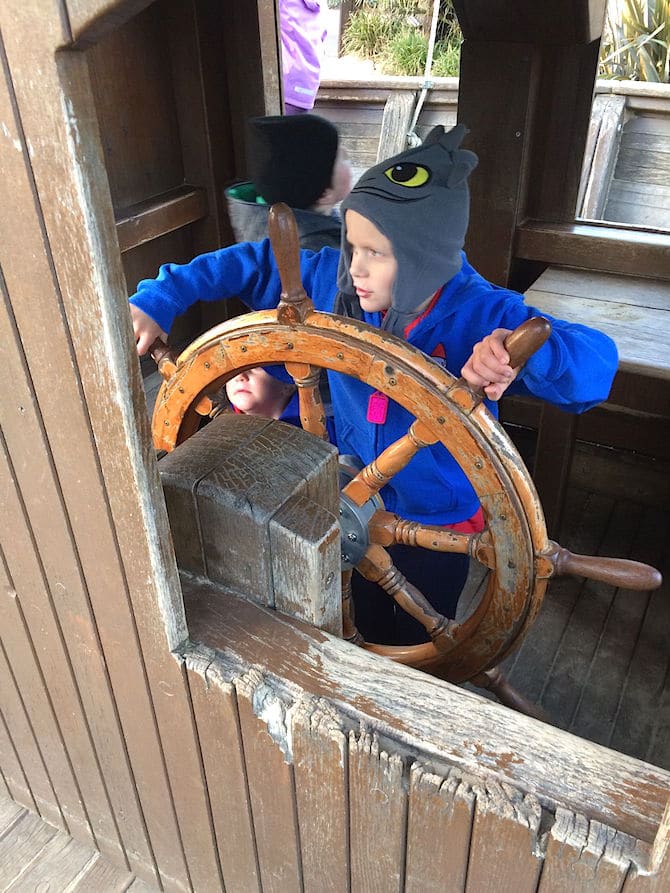 The Princess Diana playground has tonnes of stuff to:

Throughout the Pirate Ship playground, you’ll spot lots of references to the Peter Pan in Neverland story.

RELATED: Ultimate Guide of Things to do in London with kids 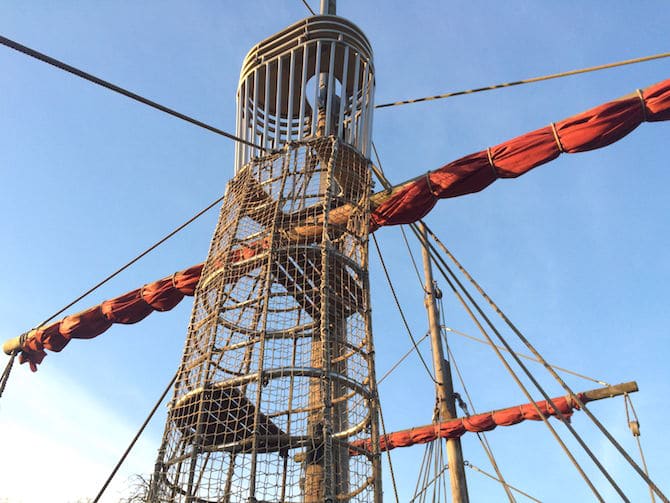 Most obvious, the giant Pirate Ship playground smack bang in the centre of a city-bound beach.

This wooden pirate ship has: 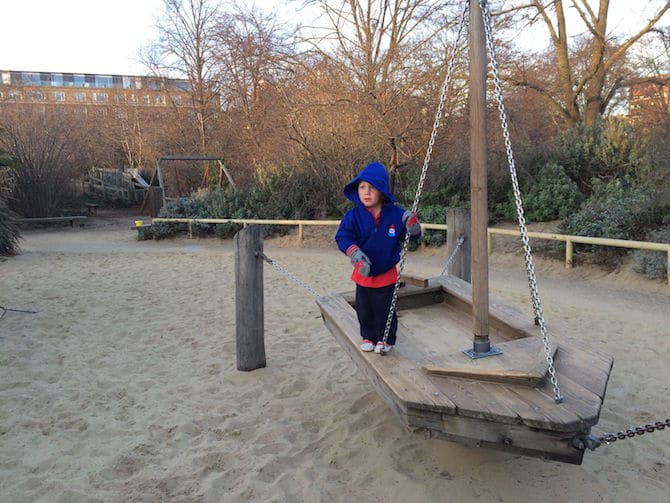 There’s smaller sailing boats that rock from side to side, a teepee village, and crocodiles ….  (Yes, crocodiles!) 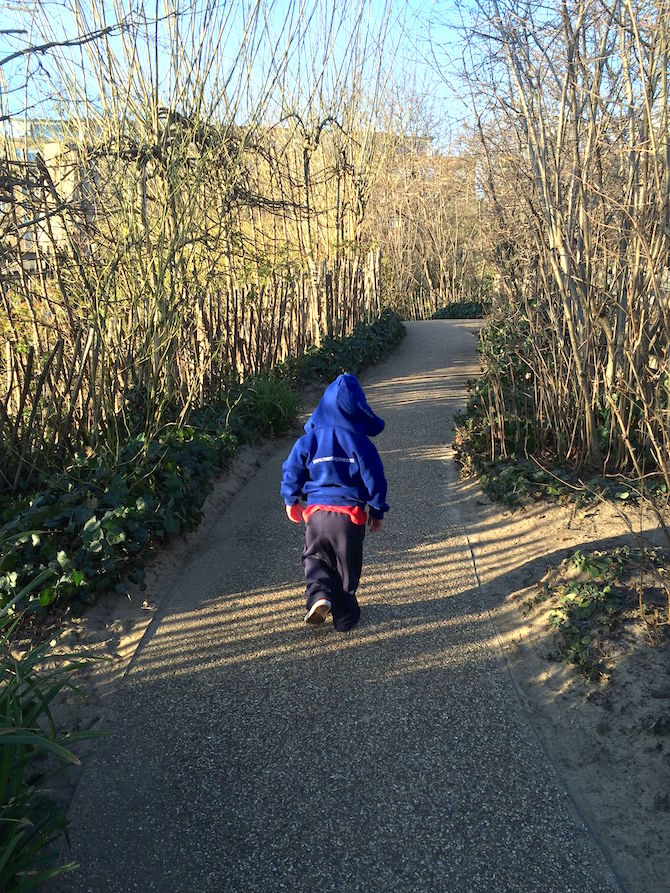 The magical space at the Lady Diana playground is beautifully divided into many different areas of fun and hidden lands, which helps to separate and manage the crowds so you don’t feel like you’re communing with half of London. 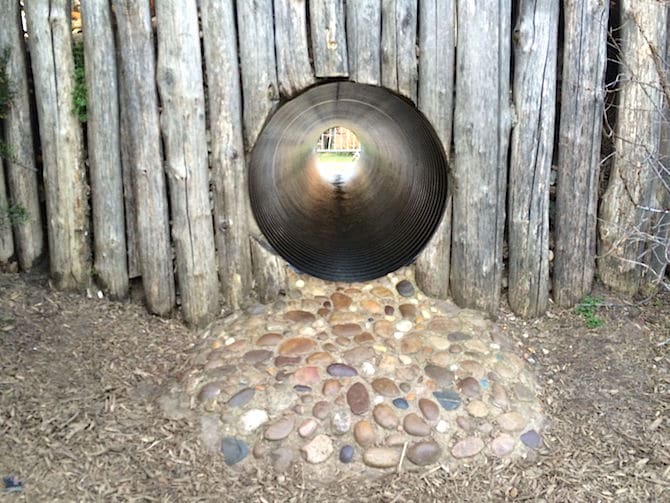 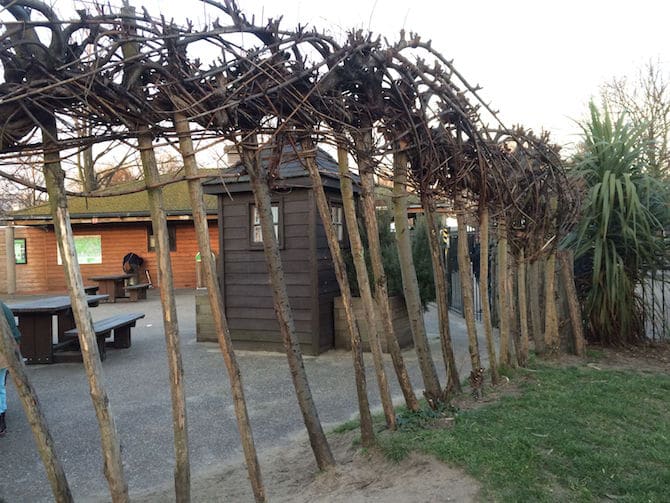 Set boundaries before you arrive

There’s one drawback to the size and layout of the Princess Diana Playground.

Finding your kids in here when they have run off in different directions can be challenging.

Be sure to attach some kind of identification on them somehow, and be firm and insistent when you set the rules that they are NOT to leave the park, or go out the front gate without you. 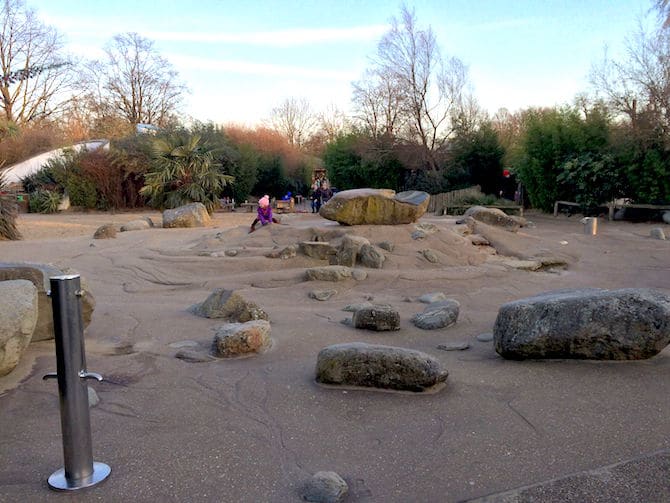 Best of all, the Princess Diana park has a water park too, operating during London’s warm summertime.

Kids can run and splash under the fountains, and in amongst the manmade streams.

THIS spot gets VERY busy! 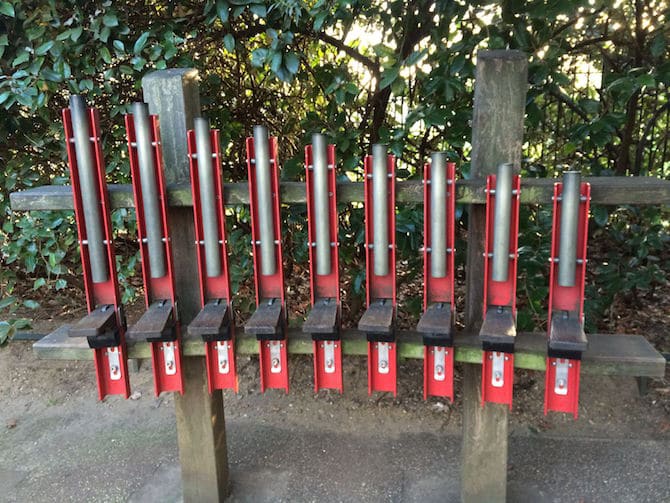 Musical instruments at the Pirate Ship playground in London

Roam the Gnome and the boys made a beeline to the Land of Music they could hear.

Hidden behind a labyrinth of trees, children could make music using a number of different instruments.

The best one… the jumping xylophone!

All the kids wanted a go.

(Watch the video below to see it in action.)

THIS is what we could hear as we entered the park, well before we had any idea where the playground was hiding.

The spinning disc ride was also a hit.

Put the Diana playground at the top of your list of things to do in South Kensington with kids and join in too.

Be prepared for a long stay.  No one is leaving here any time soon if the kids have their way! 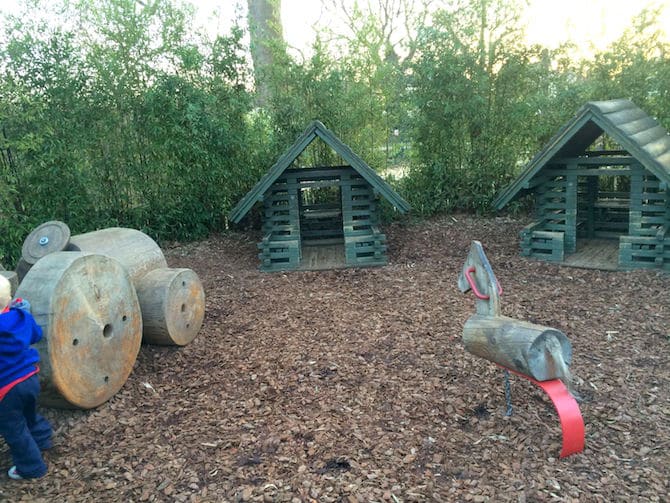 History of the Kensington Gardens Playground

Princess Diana was wife to Prince Charles, King in waiting, and mother to William and Harry.

A humanitarian at heart, she was called ‘The People’s Princess” because of her ability to break through class boundaries, and love everyone, of every size, shape and colour.

She died tragically at a very young age, following a car chase through the streets of Paris while being followed by blood-hungry paparazzi and journalists looking for a story.

The Pirate Ship Playground in Hyde Park was opened on the 30th June 2000 as a permanent memorial to Diana, Princess of Wales, recognising her love of children.

Curated to ensure equal access to both able-bodied and those less able, the storytelling aspect of the playground was designed to capture to imaginations and hearts of children while supporting their play and physical development. 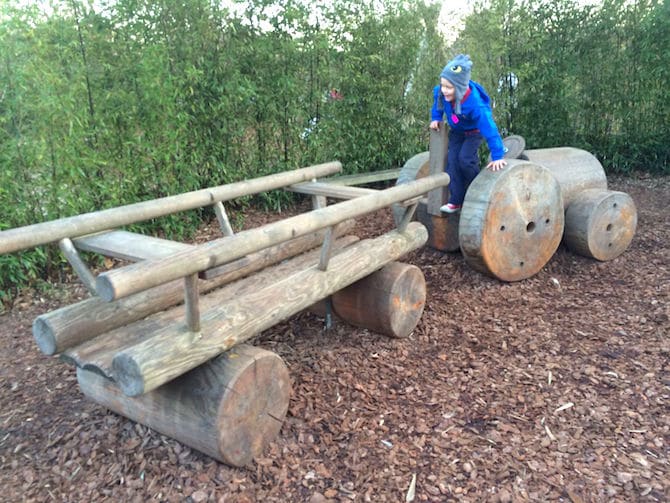 Happily, risk taking – in a controlled play environment of course – is all part of the fun!

Playground staff are there to monitor children and families but also educate them on the importance of risky play. 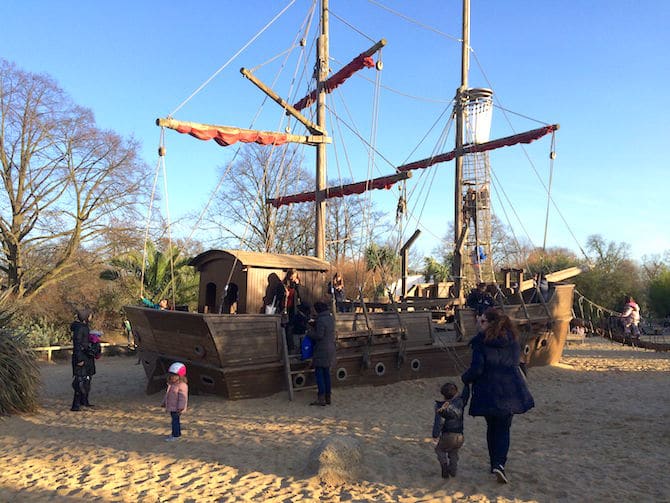 Parents, guardians and grandparents are advised to be aware of this before making a trip.

Kids can climb RIGHT TO THE VERY TOP of the Pirate Ship’s mast (and it’s bloody high!) 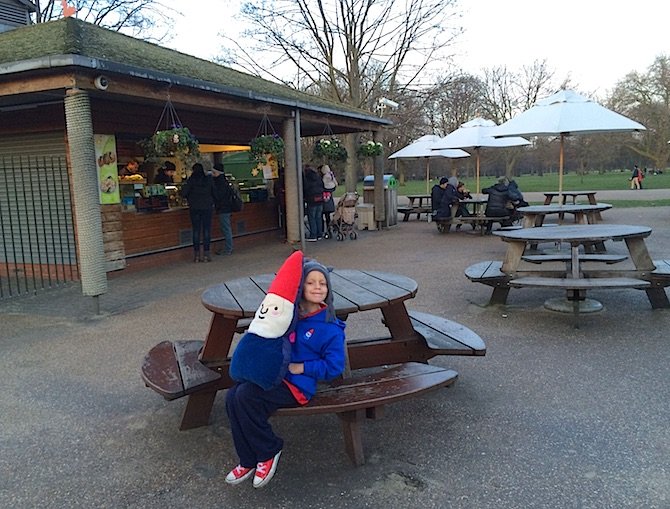 Wondering if there’s anywhere to eat at Princess Diana playground in Kensington Gardens?

They also have a children’s menu. 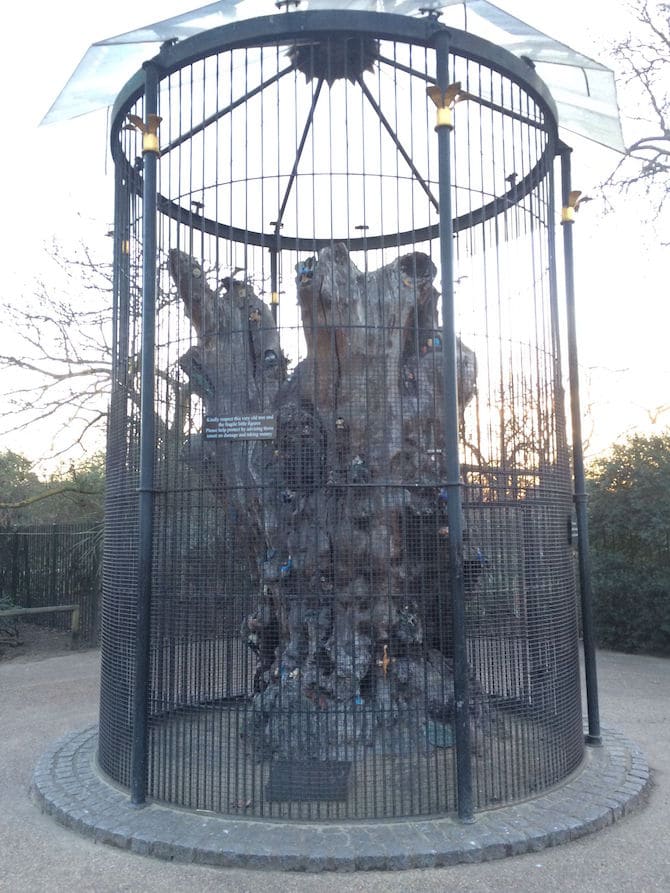 The Elfin Oak at Diana Princess of Wales Memorial Playground

The playground is a fitting tribute for a Princess who loved the innocence of childhood.

Take a peek at The Elfin Oak.

It’s right in front of the entrance gates, next to the cafe above.

The Elfin Oak the stump of a 900-year-old oak tree, carved and painted to look as though elves, gnomes and small animals are living in its bark.

The tree was moved to Kensington Gardens in 1928 as part of George Lansbury’s scheme of public improvements in London.

Over the next two years the illustrator, Ivor Innes, carved the figures of the “Little People” into it.

To ensure safety and security of children, only adults supervising children up to the age of 12 will be admitted.

Please note: unaccompanied adults may only enter the playground between 9.30 and 10.00.

There’s limits on the number of children allowed inside at one time, and when it’s full, the staff will action ‘queue management’ and only let more people in as other people exit.

Wait times can range from 15 minutes to an hour or more. 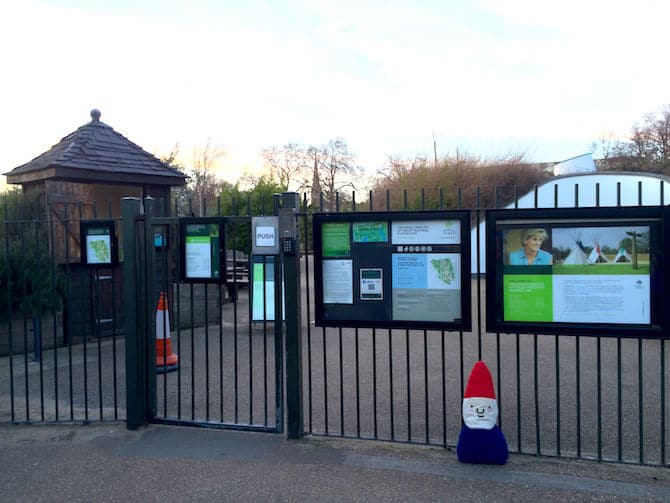 How to get to Princess Diana Memorial Playground London

Where to park near Princess Diana playground Kensington Gardens 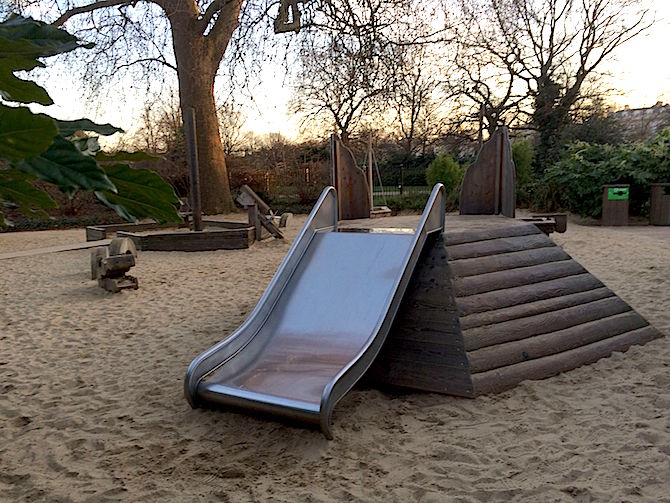 When in London with kids, the Princess Diana Adventure Playground should be the Number One playground on your list.

DEFINITELY in the top 3 of the best playgrounds in London!

Looking for MORE things to do in London for kids?

Click the links in blue below for more London tips.