INSIDE: All you need to know about where to buy Paddington Bear merchandise?

Want to know the answer to “Where can I buy a Paddington Bear in London?”, you are in the RIGHT PLACE!

It’s where you’ll find the original paddington bear for sale, along with ALL kinds of Paddington Bear merch.

If you can’t make it to Paddington Station in London, there’s a few other London shops that stock the famous old bear.

Try one of these places to find Paddington Bear for sale. 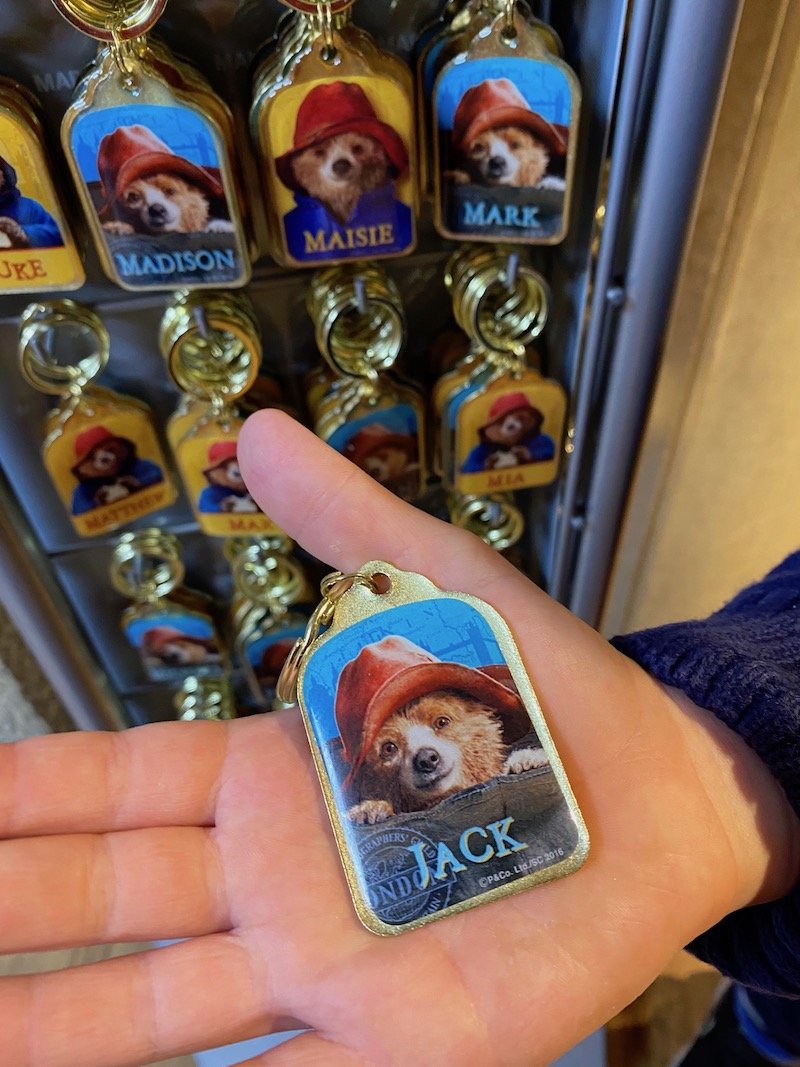 THE INSIDE SCOOP: WHERE TO BUY PADDINGTON BEAR IN LONDON

Find all 8 different shops to try and each one is the answer to where to find Paddington Bear in London.

Each one of them has a different style of classic Paddington, the bear from Peru created by Michael Bond, so check them all out to find the one you like best.

RELATED: Round Up of the Best Paddington Bear Facts! 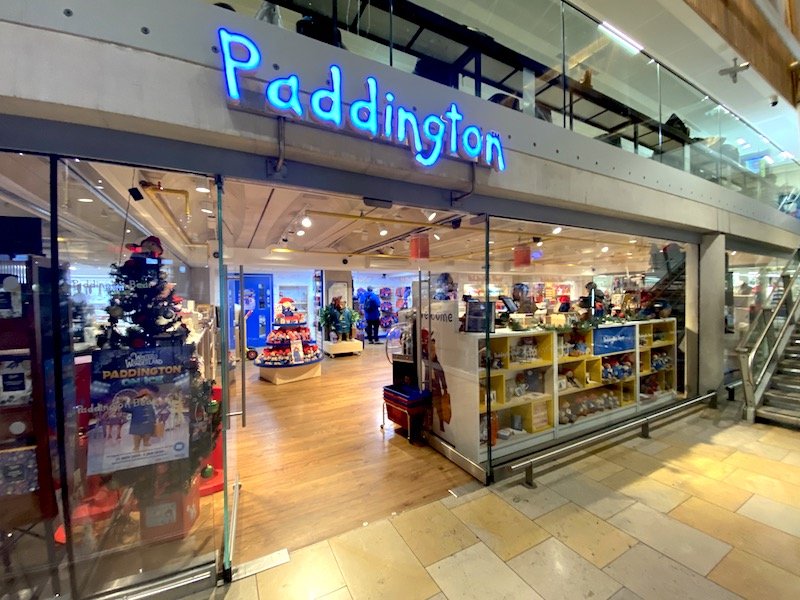 Stop by the official Paddington Store to find ALL the best Paddington merch including:

Click here for the Inside Guide including Paddington Bear Shop opening hours, and a sneak peek at the things you can DO inside the shop! 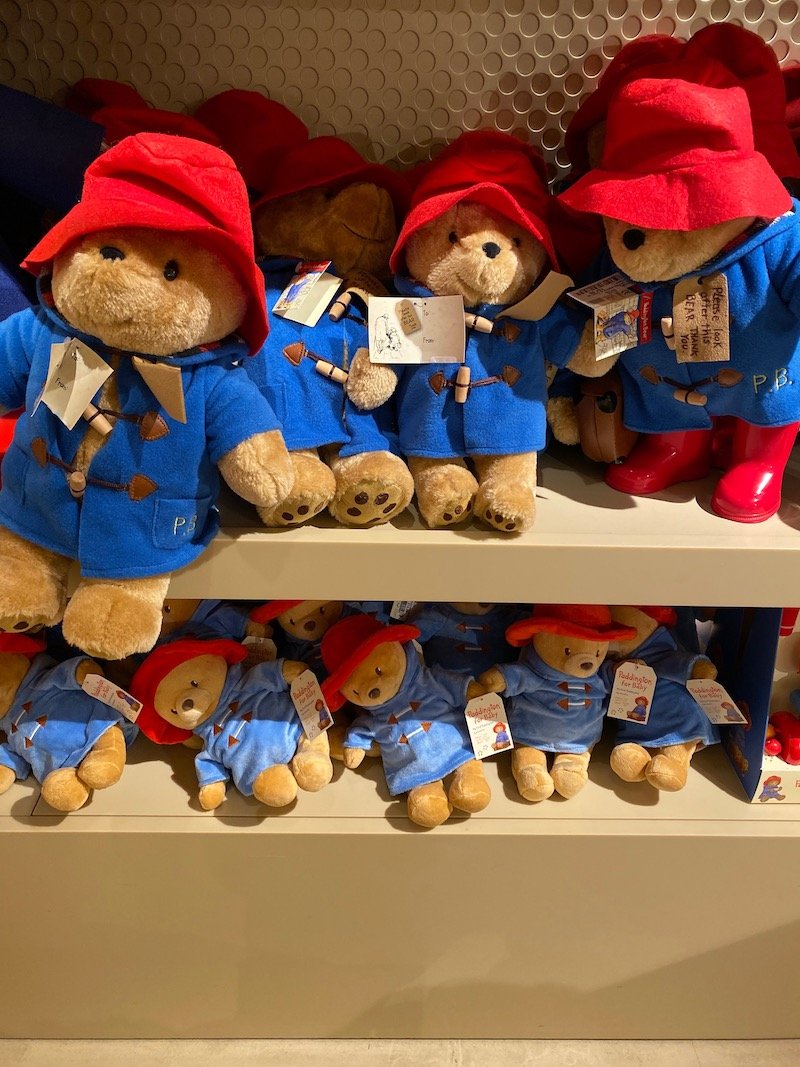 Yes, you can also buy a variety of Paddington Bear toys in Harrods too.

Take a look at our Guide to Harrods with kids to find out more. 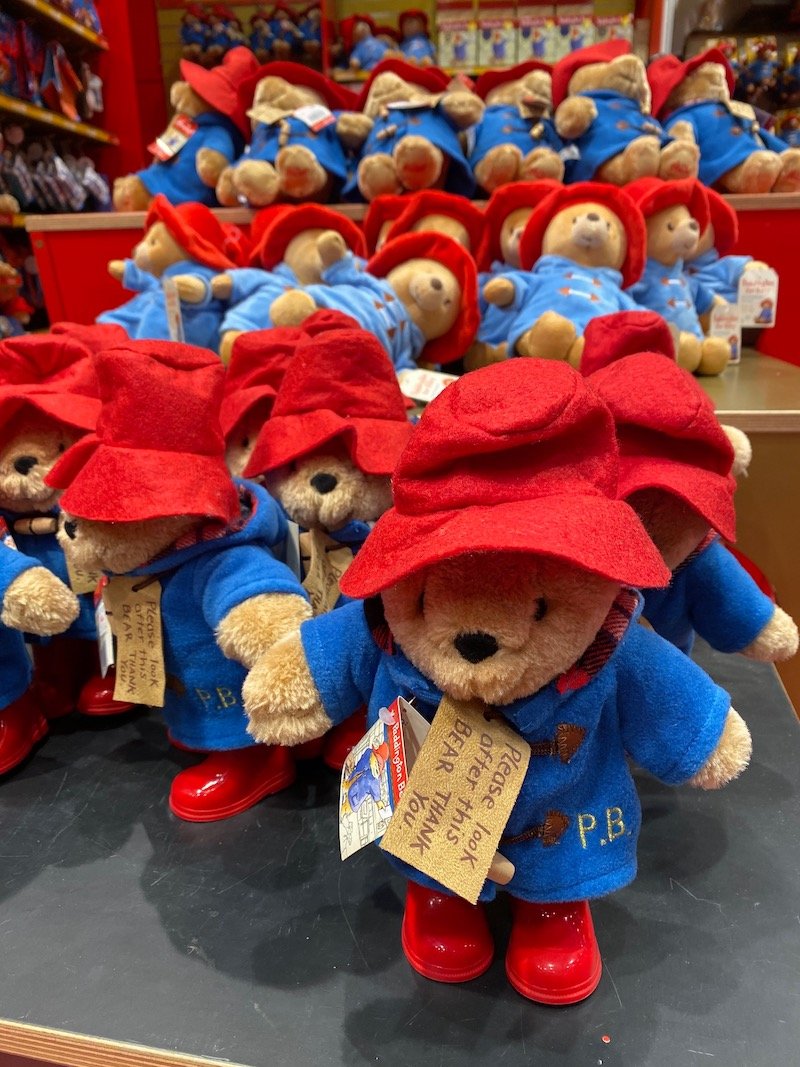 You can also head to the biggest toy shop in London, Hamleys, to find MORE Paddington Bear dolls in store.

THIS is where you’ll find the best Paddington Bear toy with a polar fleece jacket.

In fact, Hamley’s keeps this lot of Paddington Toys near the entrance door, so you don’t miss this iconic London souvenir!

It’s a London gift you can give to just about anyone! 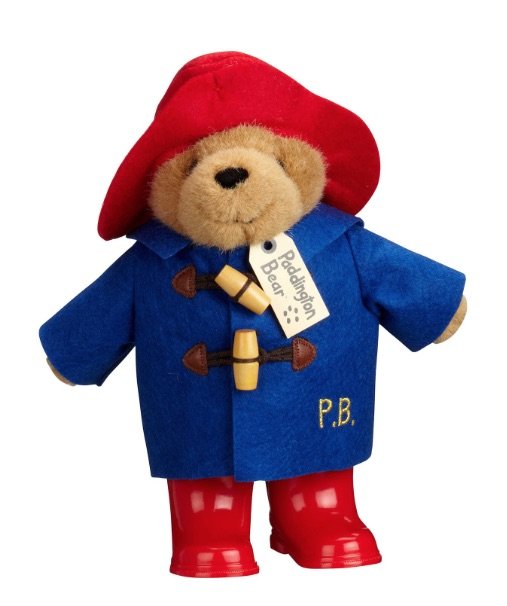 John Lewis & Partners is another British shop you can visit to find a range of Paddington gifts and toys including:

Hot tip: Check out the Paddington Bear toy Marks and Spencer has too.

Hamleys Heathrow is open from 5am until 10pm at Terminal 2, and from 5.30am at the Terminal 4 shop.

Submit a request, receive the confirmation of price and availability, and turn up at the store upon arrival at the terminal to collect and pay for your shopping. 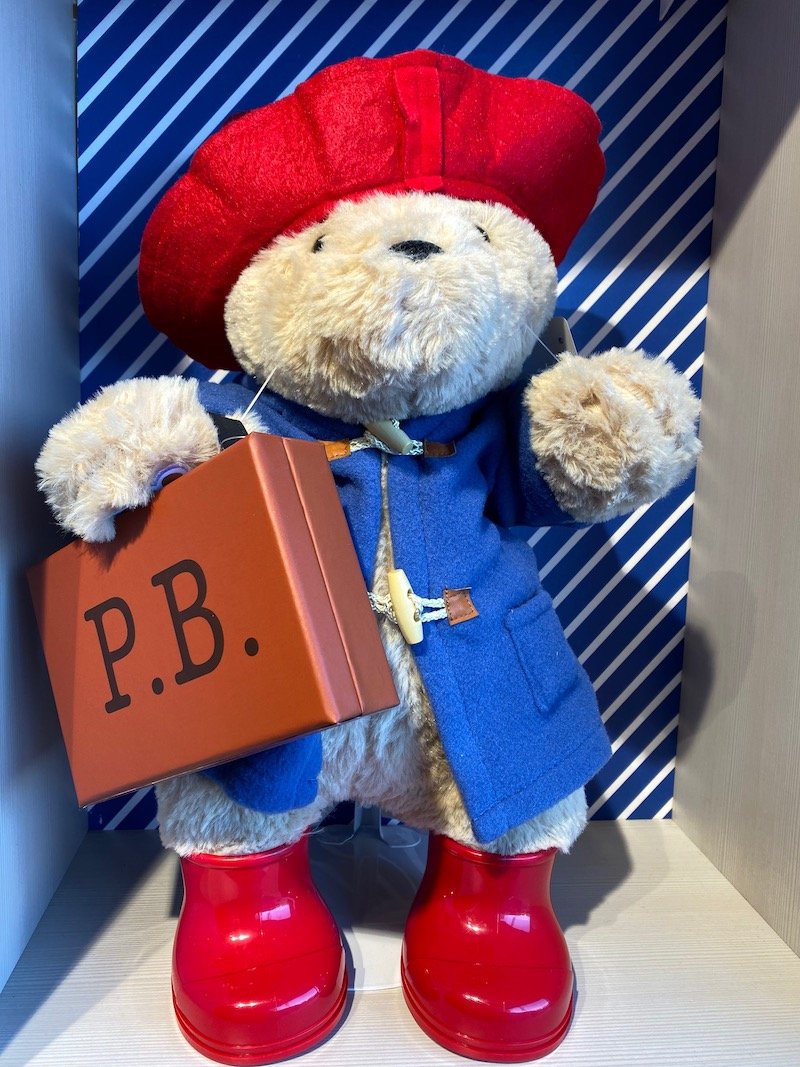 No.6: Paddington Bear Clothes from Build a Bear!

Did you know you can buy a Paddington Bear outfit for your own 18″ (45cm) doll or teddy from Build a Bear in London?

The Build a Bear Paddington outfit is sold separately.

Individual pieces to buy include: 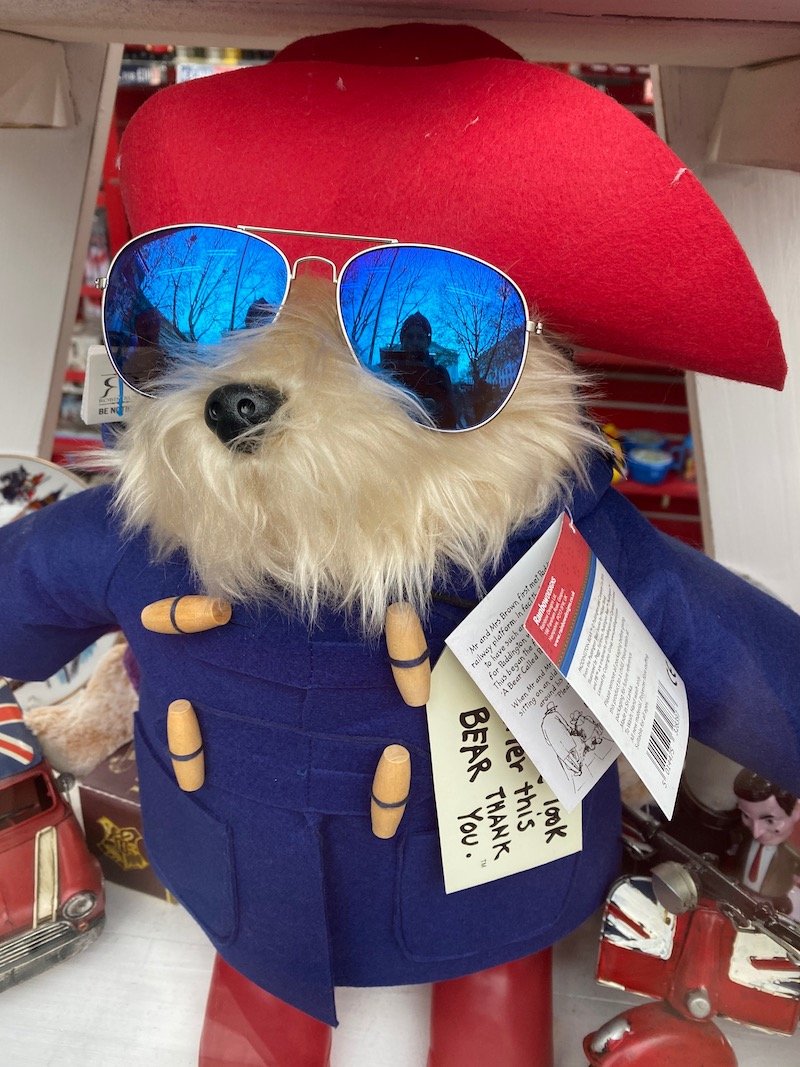 No.7: Various Paddington Bear Merchandise at Souvenir Shops in London

Look out for a Paddington Bear garden gnome – they are not easy to come by, so if you spot one, grab it with both hands! 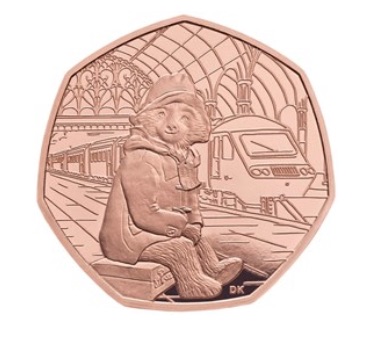 These Paddington Bear products are one of a kind. (Or at least limited edition!)

These are awesome Paddington Bear presents for a new baby gift! 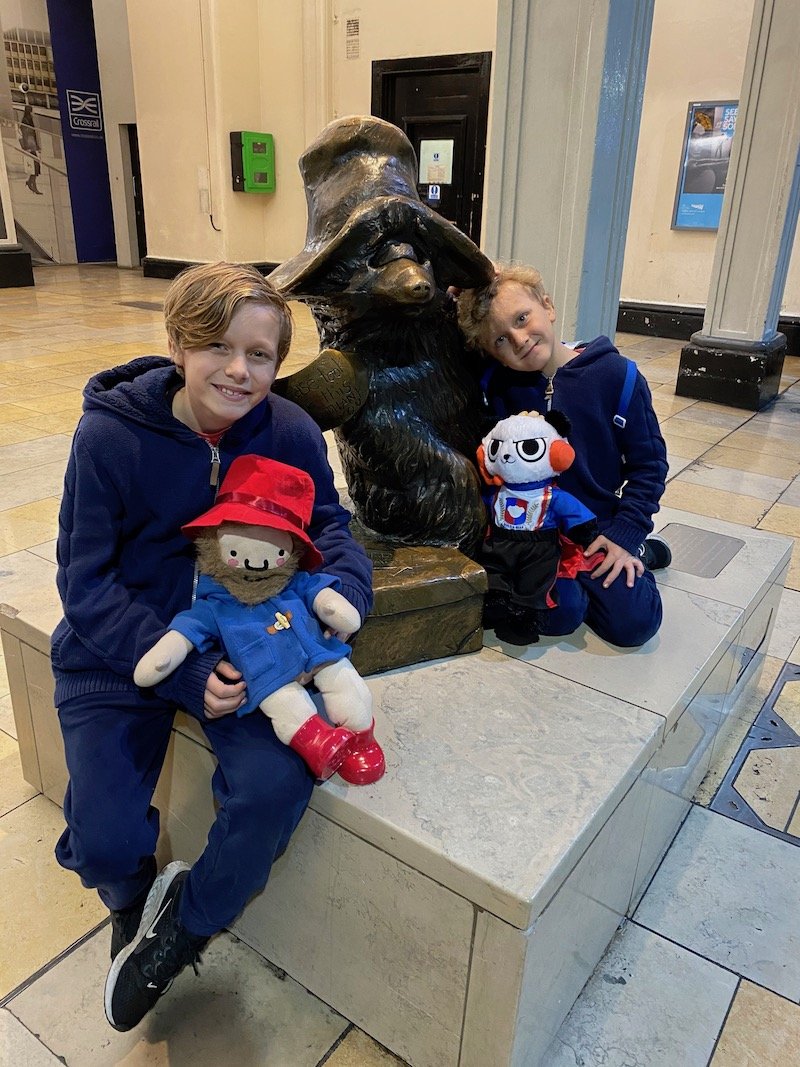 Where is the Paddington Bear statue?

The Paddington Bear bench is another spot for a cool photo, if the waiting train passengers will move for you!

Find all the details here 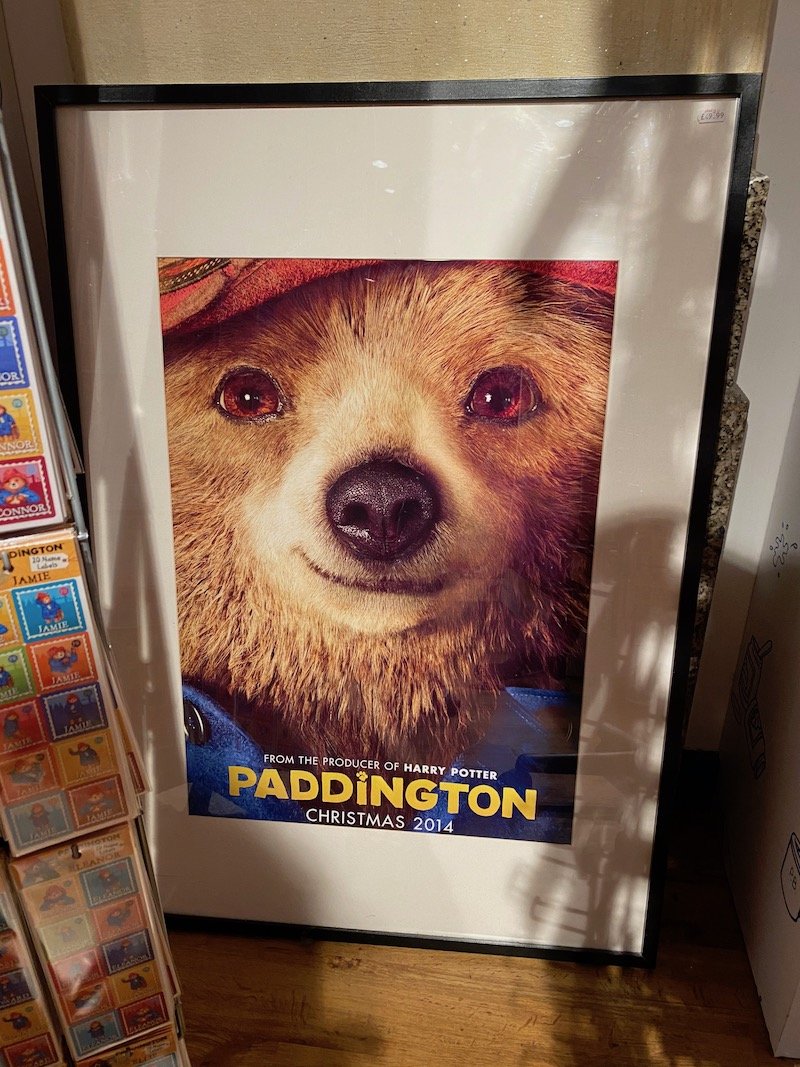 Have you ever wondered:

Did you know you can take a tour and visit some of the Paddington Bear film locations in person?

Take a look at this one, via Get your Guide. 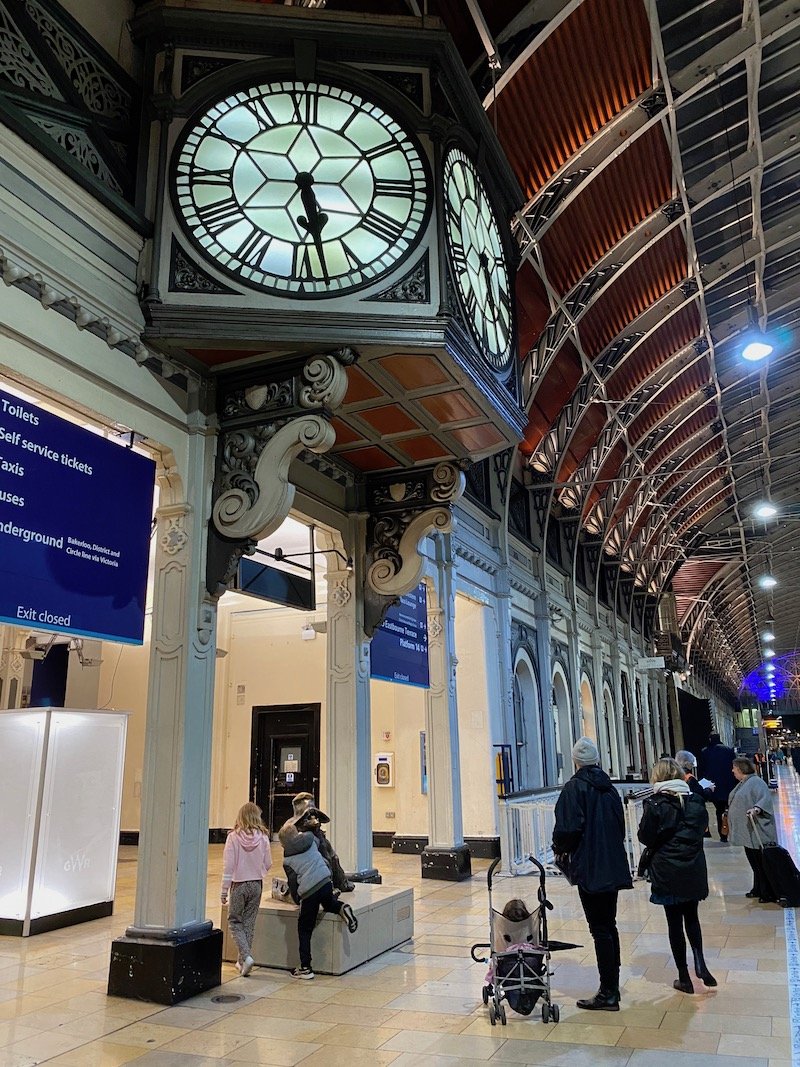