INSIDE: Roam the Gnome’s Ultimate Facts about the Spanish Steps.

One of the most popular things to see in Rome is the Roman Baroque style urban monument, the Spanish Steps.

We stumbled upon this beautiful butterfly-shaped Rome attraction accidentally, on our determined mission to find a quick way up to the Villa Borghese gardens after our visit to the awesome Explora Rome Children’s Museum.

It was the hundreds of tourists pottering about the Spanish Steps fountain and sitting on the grand staircase that alerted us to the fact this was a key Rome attraction, and NOT just a handy staircase to help us on our way.

The Spanish Steps tourist attraction have long been a drawcard on the list of things to see in Rome.

Take a look below to see why, & learn a bunch of Spanish Steps in Rome facts too. 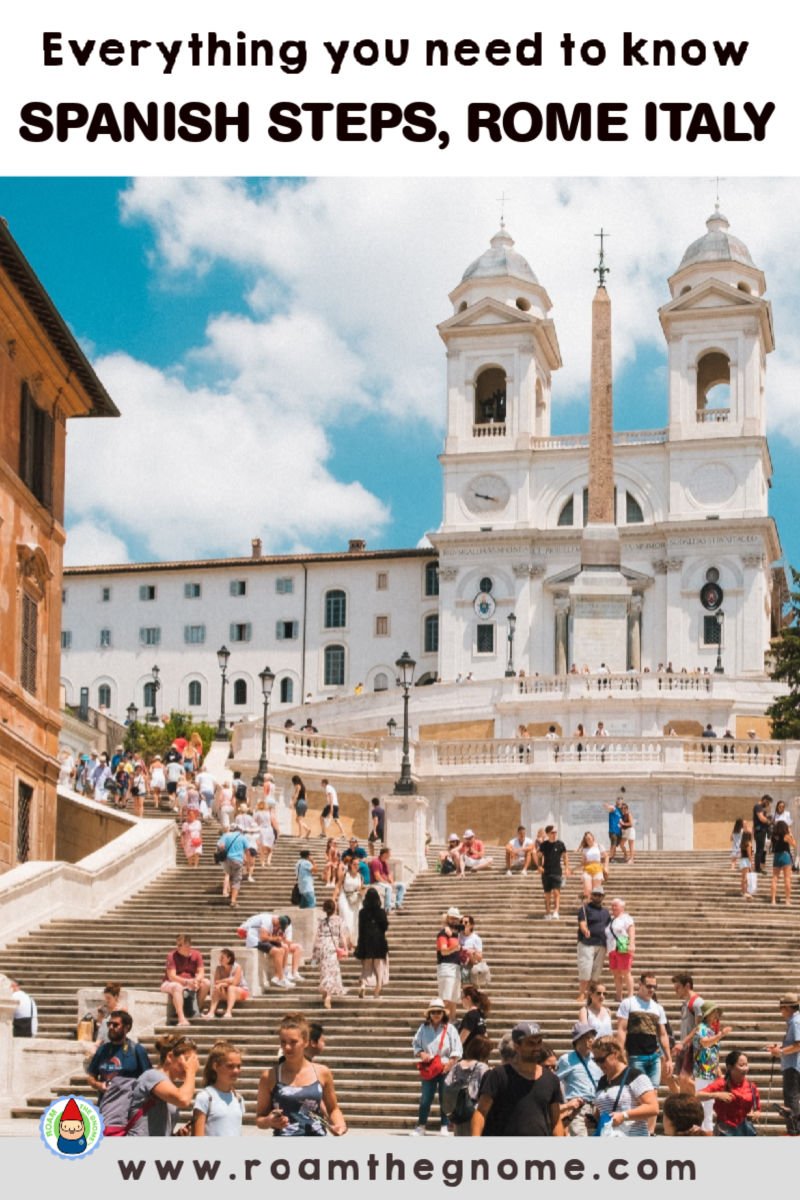 What are the Spanish Steps in Italy?

The Spanish Steps sit in front of the Piazza del Monti, which lead up to the impressive twin tower church, the Trinita dei Monti church, at the top.

At the base of the Spanish Steps, there is a wide open-space called the Piazza di Spagna Spanish square.

BOOK NOW: Fountains and Squares of Rome Two Hour Walking Tour with Get your Guide 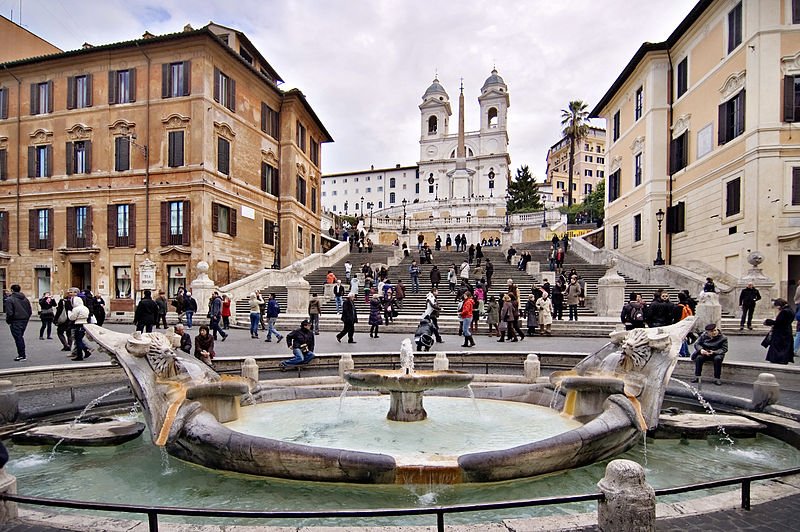 What is the name of the fountain at the Spanish Steps?

This is the home of the baroque fountain, the Fontana della Barcaccia, or the “Fountain of the Old Boat” created by Pietro Bernini, of the famous Bernini artist family.

You’ll notice the boat in the sculpture is sinking.

It is said to be an image from an old folklore story.

The Piazza di Spagna long held the honour of being a meeting place of artists, painters, and poets, along with the beautiful and sometimes rich people who are drawn to be near these creative souls.

But now, the Spanish Steps are known as the meeting place for everyone, from all kinds of backgrounds, young and old.

If you are looking for things to do in Rome with the kids, the Spanish Steps deserve at least a quick look.

The stairs are the perfect amphitheatre for a bit of people watching in the old city of Rome.

But while you are here, do take a decent stroll, up and down, at least once.

After all, that’s what these Spanish Steps are made for! 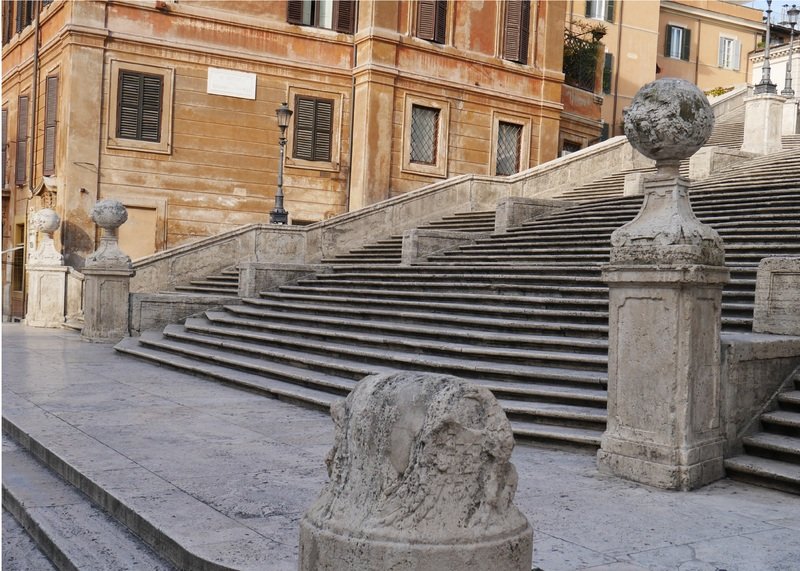 9 FUN FACTS ABOUT THE SPANISH STEPS IN ROME ITALY

No.1: How old are the Spanish Steps in Rome?

The Spanish Steps are over 295 years old.

No.2: When were the Spanish Steps in Rome built?

This monumental set of stairs was built between 1723 and 1725 by the architect Francesco de Sanctis.

No.3: Why are they called the Spanish Steps?

The Spanish Steps and the Piazza di Spagna were originally called the Trinità dei Monti after the church at the top, but were renamed in honour of the Spanish Ambassador who lived there.

No.4: Are the Spanish Steps open?

Yes. The Spanish Steps were closed during the restoration period in 2016 but reopened on September 21, 2016.

The famous Italian jewelers, Bulgari, funded the restoration at a cost of €1.5 million.

Bucketloads of chewing gum, along with a flood of red wine and coffee stains, were removed.

No.5: What’s so special about the Spanish steps?

They are the widest set of stairs in Europe, and an ancient centrepiece of this famous city. 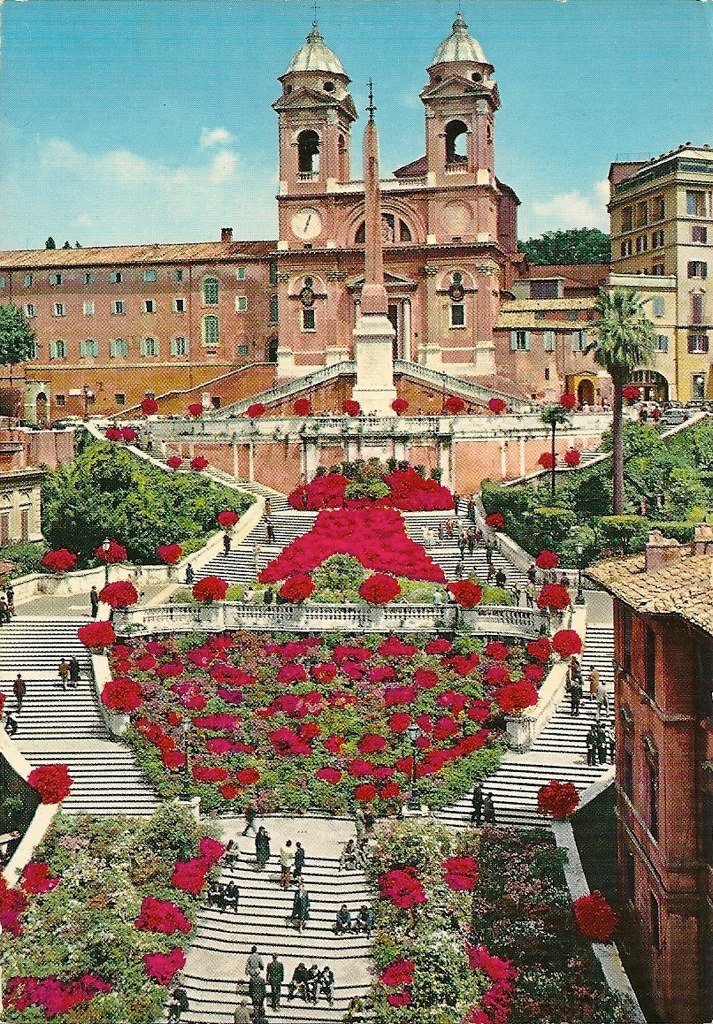 No.6: When is the best time to visit the Spanish Steps?

If you visit in Springtime during mid April to early May, you’ll witness the Spanish Steps in full bloom as hundreds of pots of deep purple azaleas lining the route.

It’s a commemoration of the foundation of Rome and a sight to see!

No.7: What movie was the Spanish Steps in?

The steps were made famous by featuring in the much loved 1953 romantic comedy Roman Holiday, starring Gregory Peck and Audrey Hepburn.

Did you know you can book a tour to visit ALL the sites featured in the Roman Holiday film?  You can!

No.8:  Can you eat on the Spanish steps?

Don’t think about eating lunch on the steps.

Dare to try it, and it might cost you a fine – anywhere from 25 Euro right up to 500 Euro for eating pizza, sandwiches, or snacks on this much-loved staircase. 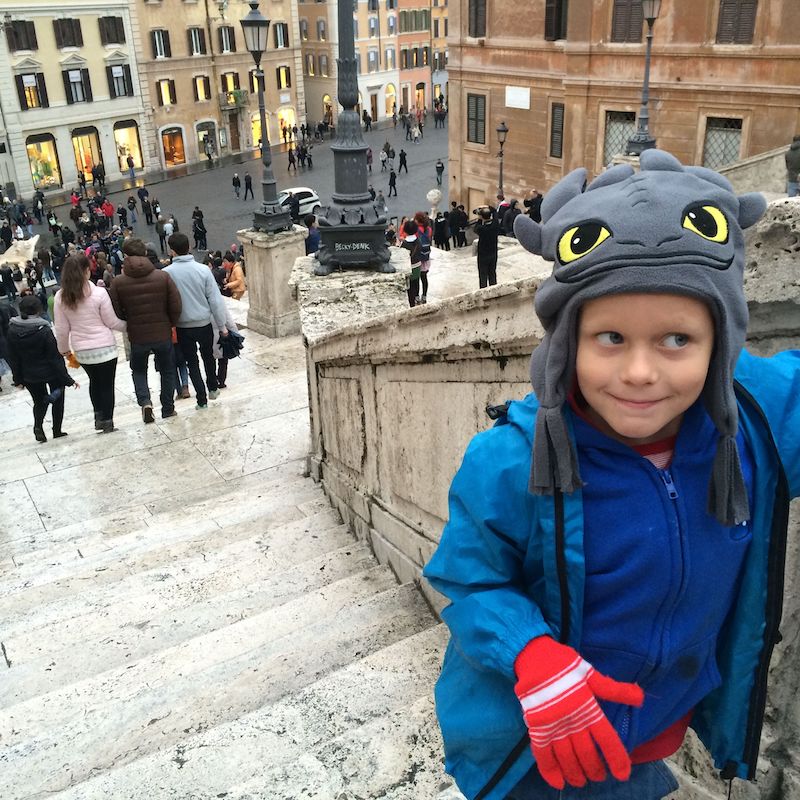 No.9: How many Spanish Steps are there in Rome?

NOT 136. (The first ‘step’ is actually part of the drainage system!)

That’s a lot of puffing.

But If you are seven, the Spanish Steps are THE place to practice cartwheels!

At least, that’s what Ned thinks. He spun, not walked, his way from bottom to top in this unique way!

I though, half-carried, half-dragged the stroller up the stairs, with Jack on my front in the Ergo.

There were definitely swear words involved. 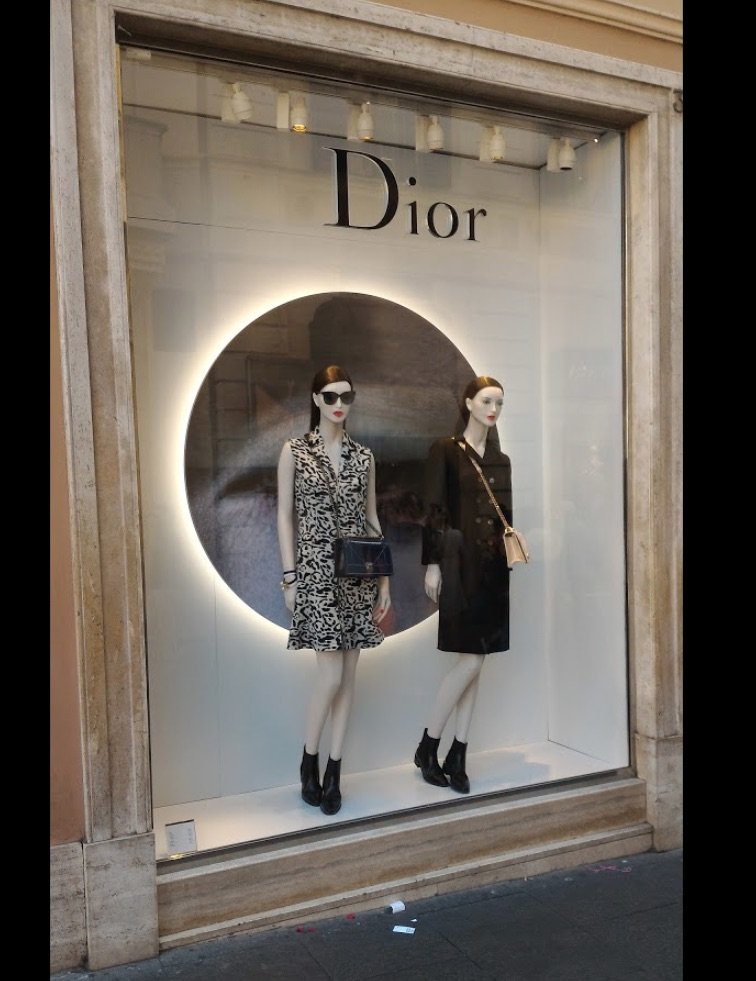 At the top, for those who love shopping in Rome, you’ll find a row of artists, caricaturists, and souvenir sellers all hawking their wares.

Plus, there’s all the high end brands and familiar names around the square, including: 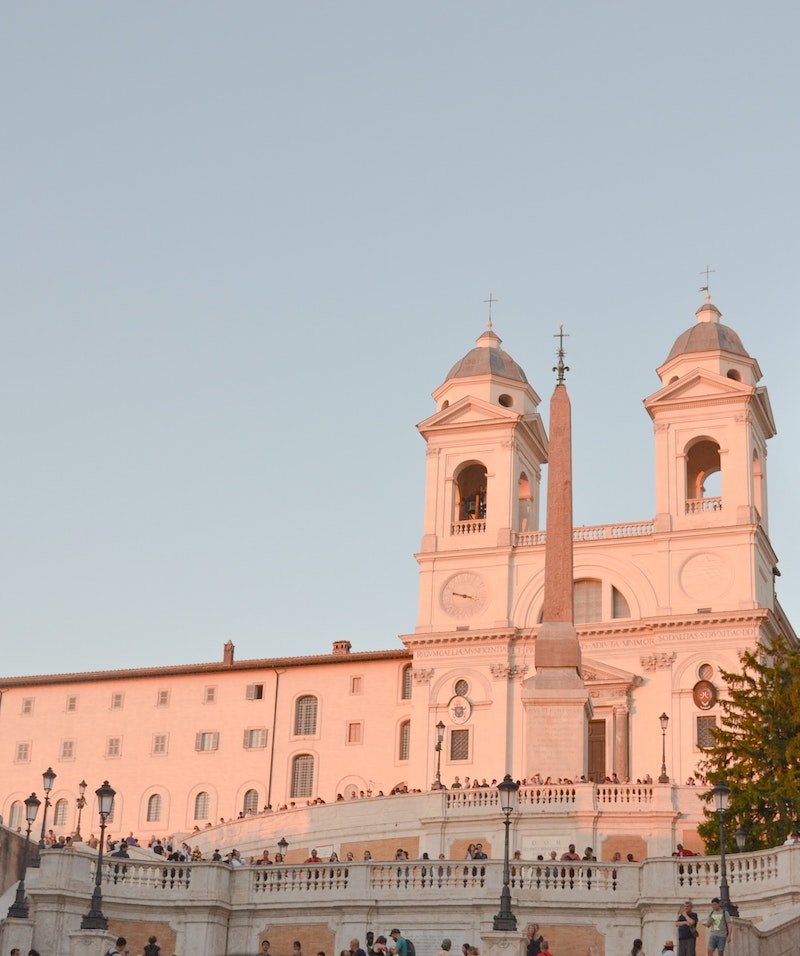 THE INSIDE SCOOP: Visit Spanish Steps in Rome

Correct at time of publication on Roam the Gnome. Please check with venue for updates. We apologise in advance if there have been any changes we are unaware of. All prices in euro, unless otherwise stated

Where are the Spanish Steps in Rome Italy?

You’ll find the Spanish Steps very close by to the Villa Borghese Gardens.

They are 650 metres walk from the Trevi fountain, across the main thoroughfare road of Via Del tritone.

They are also VERY close to this fabulous leather shopping street in Rome.

Entry Fees at the Spanish Steps

Are the Spanish Steps free? Yes!

The Spanish steps are part of the regular Roman streetscape, and there’s no fences or gates to pass through. 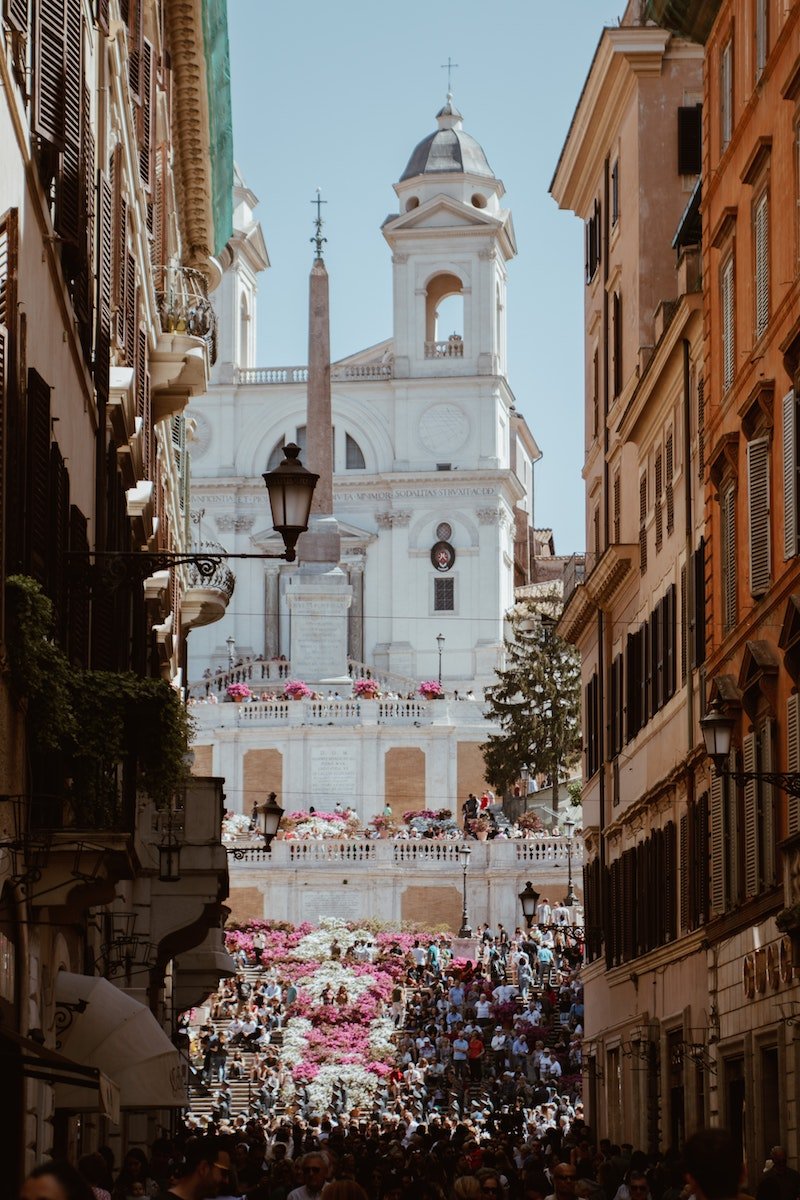 How to get to the Spanish Steps?

On foot:  5 -10 minutes walk from the Trevi Fountain, or 30 minutes from the Piazza del Popolo will also get you to the famous “scalinata”, the word for steps in Spanish (or set of stairs).

By Subway:  The subway station “Spagna” opens right onto the square

By Bus: Take a bus to Via del Corso. Alight somewhere along the main street and wander down one of the elegant streets that lead to the square

By Taxi or Uber: The Spanish Steps are easily accessible by taxi or Uber.

FAQ about these famous steps in Rome.

Are the Spanish Steps near the Trevi Fountain?

Fairly close. A 5 minute walk away.

Are the Spanish Steps worth seeing?

Definitely. You shouldn’t miss them if you are visiting Rome for the first time but once may be enough.

The hoards of tourists from around the world trying to get the best angle for an instagram shot may be off-putting to those who like a more local experience of a city.

Why can’t you sit on the Spanish Steps?

Rome police established a new rule in 2019 banning tourists and visitors from sitting on the stairs to rest, or eat & drink.

Those who dare defy the rule risk a  fine of €250, increasing to €400 if the visitor has dirtied or damaged the stone staircase during their rest and relaxation time. 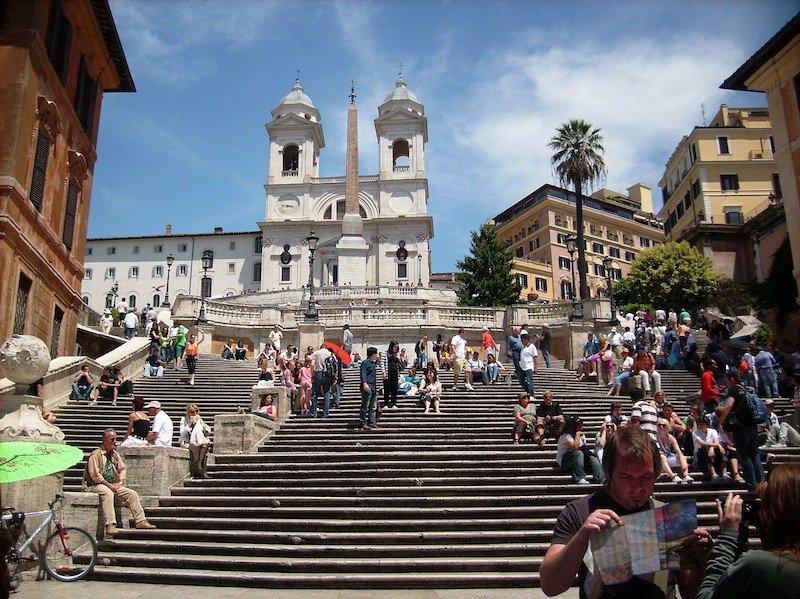 There’s not much to do for kids here, but the Rome Disney Store is not far away. Good for a quick visit, and to check out the artists ware.

Click the links in blue for more Rome tips below.