INSIDE: Take a sneak peek into the Pokemon Center Ikebukuro, the best place in Japan for Pokemon fans.

Pokemon Center Ikebukuro is firstly a shop, but for a retro look back into childhood, it’s worth a visit, even if you only spend 30 minutes there.

Take a look below for details of the Pokemon Store Japan. 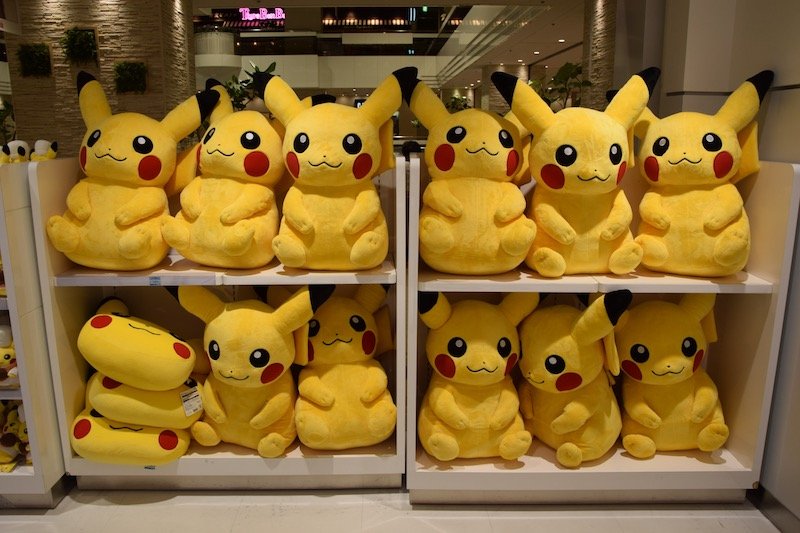 Pokémon was created by Satoshi Tajiri in 1995. (Yes, that makes both you and me old!)

Did you know that Pokemon is short for ‘Pocket Monster‘?

Pokemon began as a pair of video games for the original Game Boy published by Nintendo but has grown into a worldwide franchise based upon the characters.

As well as video games, there are:

The only gaming franchise that is bigger is Super Mario!

The 20th anniversary of Pokemon was celebrated in 2016 with a Superbowl commercial!

2016 marked the 20th anniversary of the release of the original games, with the company issuing re-releases of Pokémon Red, Blue, and Yellow.

2016 also saw the launch of the next generation of games, Pokémon Sun and Moon, and the release of the new mobile augmented reality game Pokémon Go. 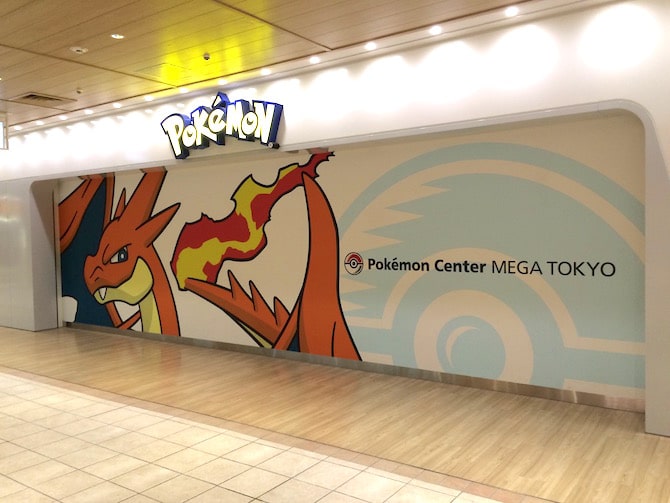 Roam the Gnome’s favourite Pokemon (and arguably the most well known) is the little yellow pocket monster known as Pikachu, who is the mascot of the brand.

Dragonites, the orange dragon with two turquoise wings on his back is popular too.

Dragonites have the ability to inner focus which allows it to keep from flinching in a battle.

Check out the statue of Dragonite at the Pokemon Japan store. 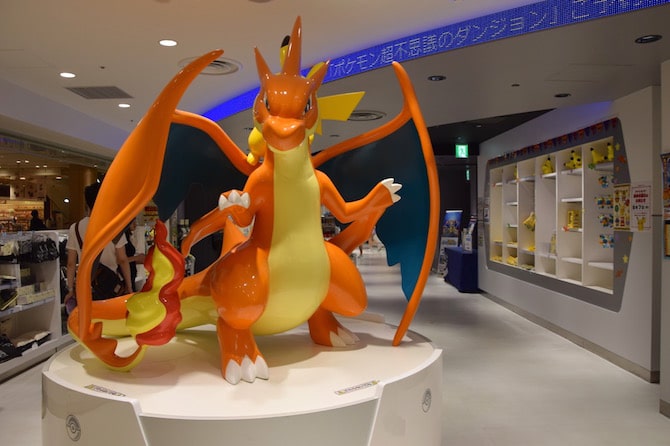 What to Buy at the Pokemon Store Tokyo

Die-hard Pokemon-loving kids and families must not miss this place.

There’s every kind of cute Pokemon product you can imagine at Pokemon Mega Tokyo, all in one spot.

Note though that there is a huge focus on Pikachu, and not so much on the other Pocket Monsters.

You may, or may not, find your particular favourite in products at the Pokémon center, especially if your Pokemon favourite is a bit left-of-centre. 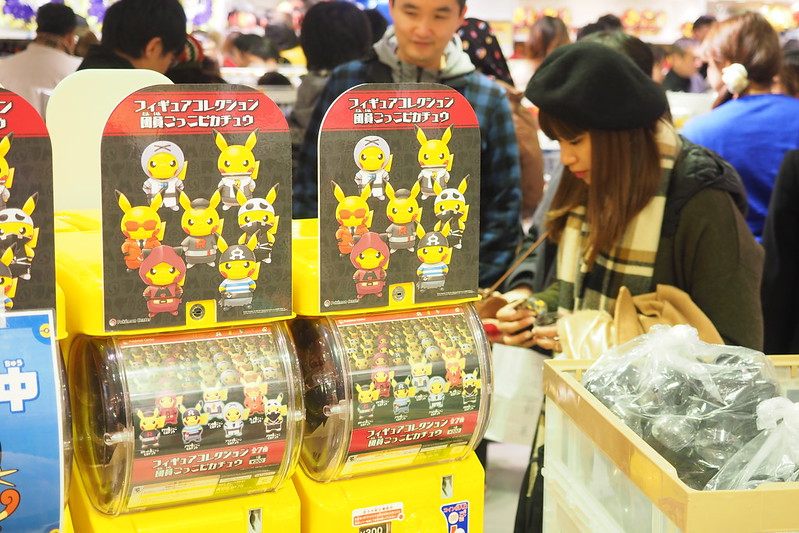 Find Pokemon products at this Ikebukuro Pokemon Center shop including: 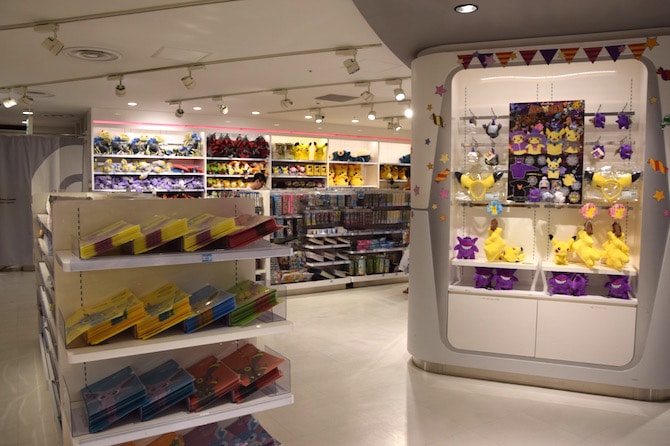 THINGS TO DO AT SUNSHINE CITY POKEMON CENTER

Visit Sunshine City Pokemon Center on a weekend to see all the people milling about in Cosplay outfits.

There are a few trading card stations at Pokemon Mega Center Tokyo.

This is where you can play the Pokemon trading card game against a Pokemon Center staff member, or against your kids if they know what to do too.

Check our Pokemon instructions guide below. 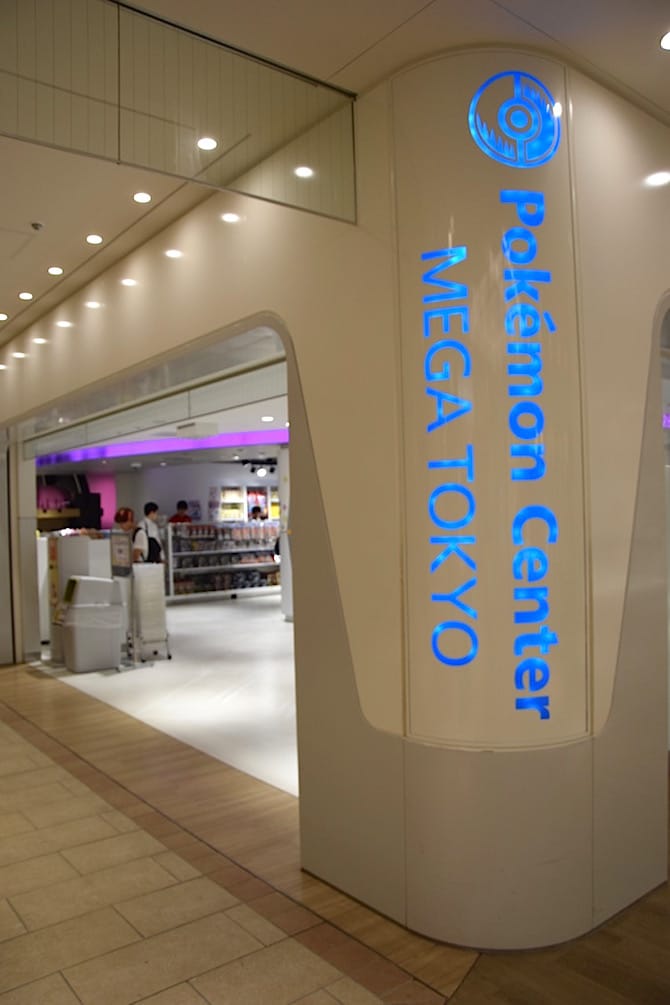 How to play Pokemon

Players of the games are designated as Pokemon Trainers and in the main series Pokémon games, these trainers have two general goals.

These are to complete the “Pokedex” by collecting all of the available Pokémon species found in the fictional region where that game takes place; and to train a team of powerful Pokémon from those they have caught to compete against teams owned by other Trainers, and eventually win the fictional Pokémon League.

These themes of collecting, training, and battling are present in almost every version of the Pokémon franchise, including the video games, the anime and manga series, and the Pokémon Trading Card Game.

The Pokémon franchise includes 729 revealed species of the title characters.

Pokémon can be organized according to a number of different attributes.

Pokémon may also be grouped into “families” of the Pokémon (eggs/fossils, for example) they evolve (or hatch or revive) from and into.

It is thought that the reason it is so popular with children is that children find kinship and a sense of community with particular characters and their traits, and that this sense of connection to the characters keeps them coming back for more.

(Game play time with their tribe.) 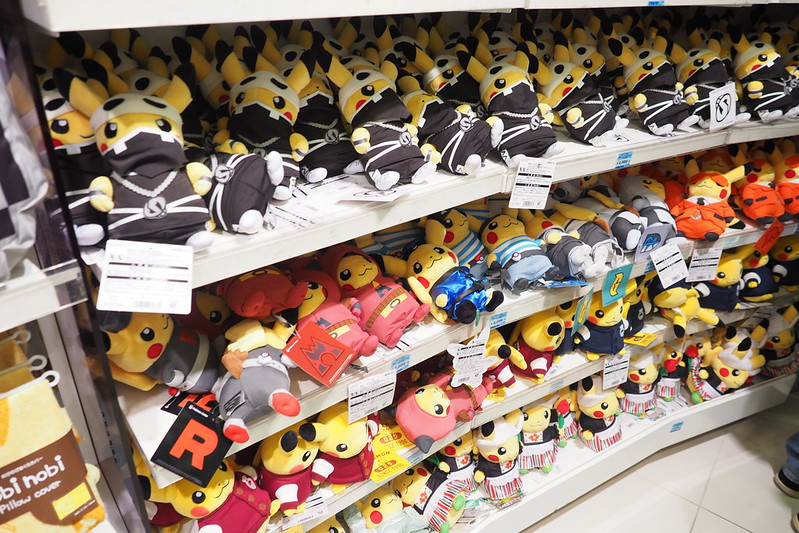 How to get to Pokémon Center Tokyo

Wondering how to get to Pokemon Center Ikebukuro?

The nearest stations are:

For SUPER FANS, the Pokemon Center in Japan will be a FIVE.

The Pokémon shop in Ikebukuro is definitely the best shop in Tokyo for Pokemon fans.

Looking for MORE SUPER DOOPER FUN things to do in Ikebukuro with kids?

Click the links in blue below for more Tokyo tips