INSIDE: The BEST Kmart Travel Games for families for road trips and plane trips.

Heading to the shops to find fun Kmart travel games for families that:

Take a look below at the best Kmart travel games you can buy on a budget! 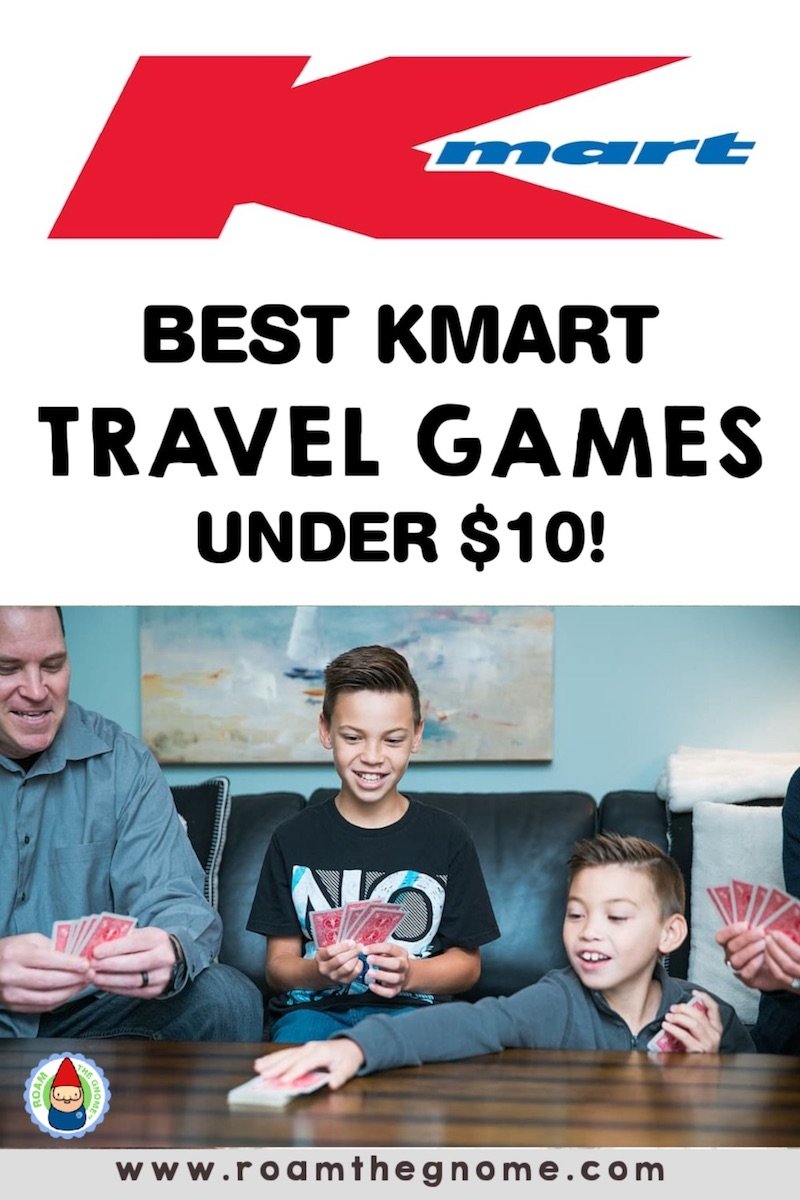 Kmart have a range of old-school retro style toys in stock at present, and quite a few of these toys and games are PERFECT for “road-tripping” and “jetsetting” kids.

We stopped by the Kmart toys section last week to check out all the Kmart kids games in stock, and took a few snaps of our top picks. 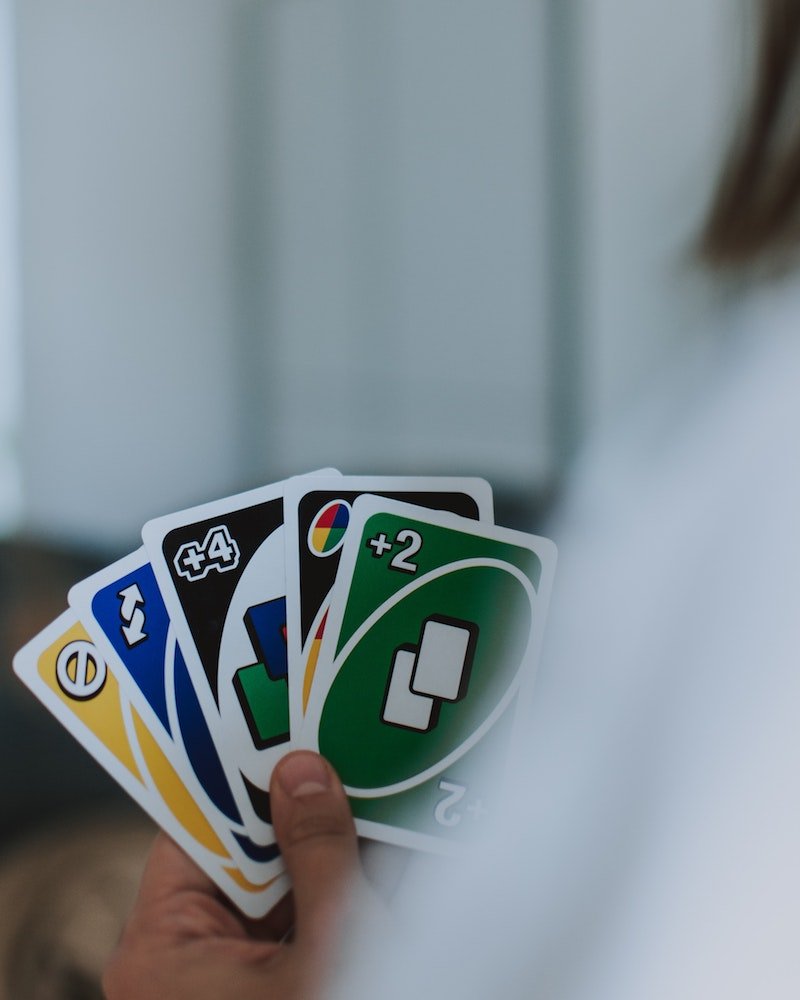 (Well, not literally. Do pay at the Kmart counter before leaving the shop!)

This is one game that never ever goes out of fashion.

The deck consists of 108 cards, of which there are twenty-five of each color:

Each color having two of each rank except zero.

The ranks in each color are:

(The last three of these being classified as “action cards”).

In addition, the deck contains four each of:

The goal of the UNO cards Kmart game, as we play it, is to use up all your cards so you are the first one to have empty hands. 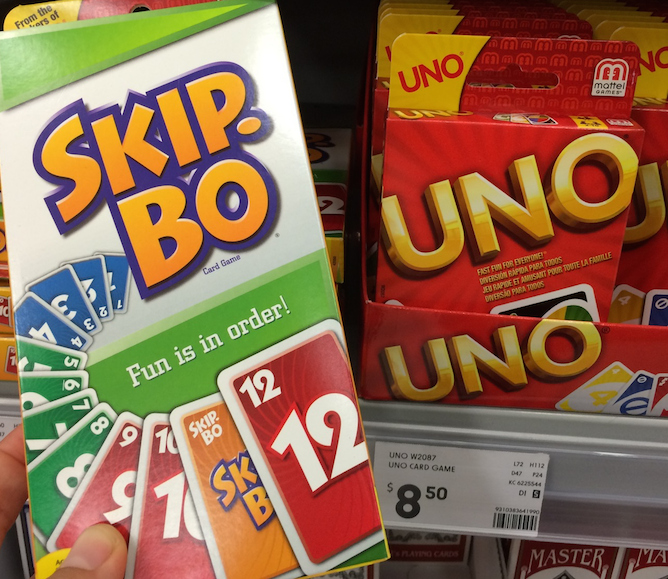 To start a hand, seven cards are dealt out to each player, and the top card of the deck is flipped over and set aside to begin the discard pile.

To begin the game, the first person lays down their card.

The next person to play must take an action- either:

There are also certain ‘directions’ that must be followed.

If the person lays down a SKIP card, the next player misses a turn.

If the person lays down a DRAW TWO card, the next player must pick up two cards from the main pile.

If the player lays down a REVERSE card, the order of play switches direction.

If a player lays down a WILD card, they get to change the colour of the next card to their choice.

If a player lays down a WILD DRAW FOUR, they get to choose the next colour card to be laid down AND the next person must skip a go, AND pick up four cards from the main pile.

A player who plays his/her next-to-last card must call “uno” as a warning to the others.

The first player to get rid of his/her last card (“going out”) wins the hand (if playing for points) or the “game” (if not tallying up points ongoing.)

A PDF printable set of instructions, “How to Play UNO”, can be found here. 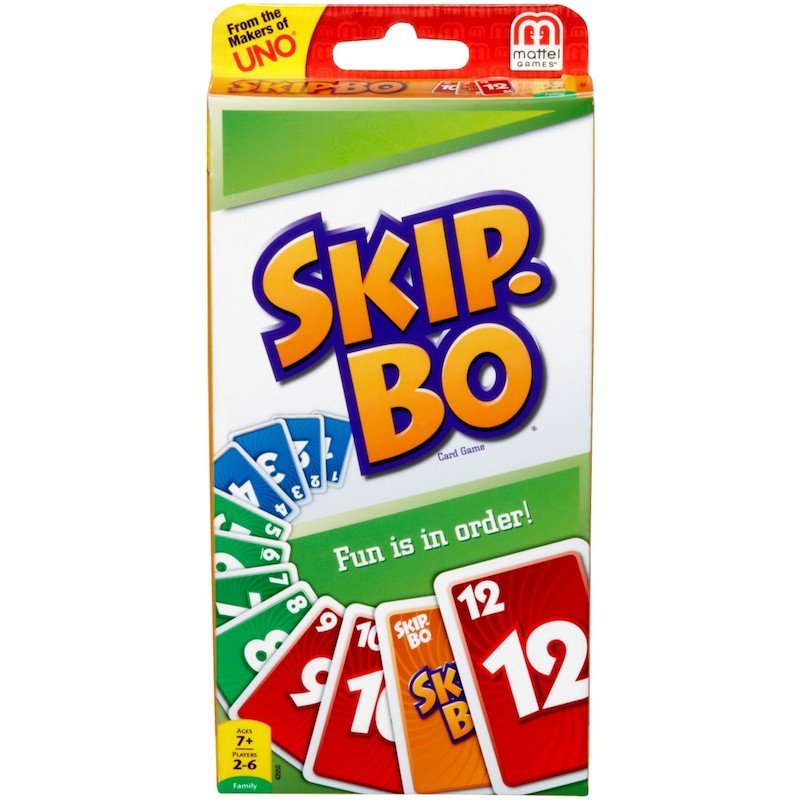 A cousin to UNO, Skip Bo Kmart is not quite as popular as the household name UNO, but super fun for those who love playing with numbers!

The SkipBo deck consists of 162 cards:

Two to four people can play at a time as individuals, or, six or more players in teams (no more than three partnerships).

The object of the Skipbo game is to be the first player or team to play out their entire stock pile(s).

A PDF printable set of instructions, “How to Play Skip Bo”, can be found here. 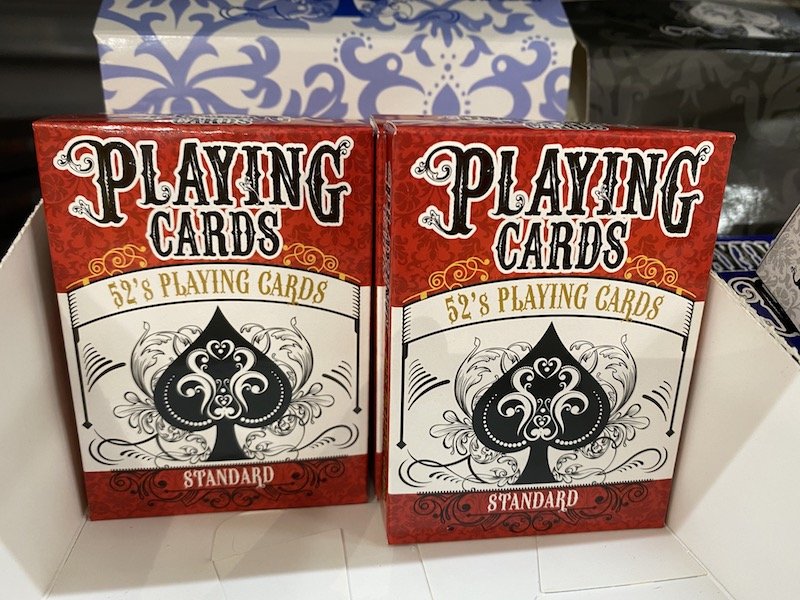 Games to Play with Playing Cards?

SNAP is the first card game that most kids play.

It’s easy to grasp, and quick, so parents don’t doze off while waiting for the kids to get it!

Pick up a pack of Kmart playing cards to start your challenge. 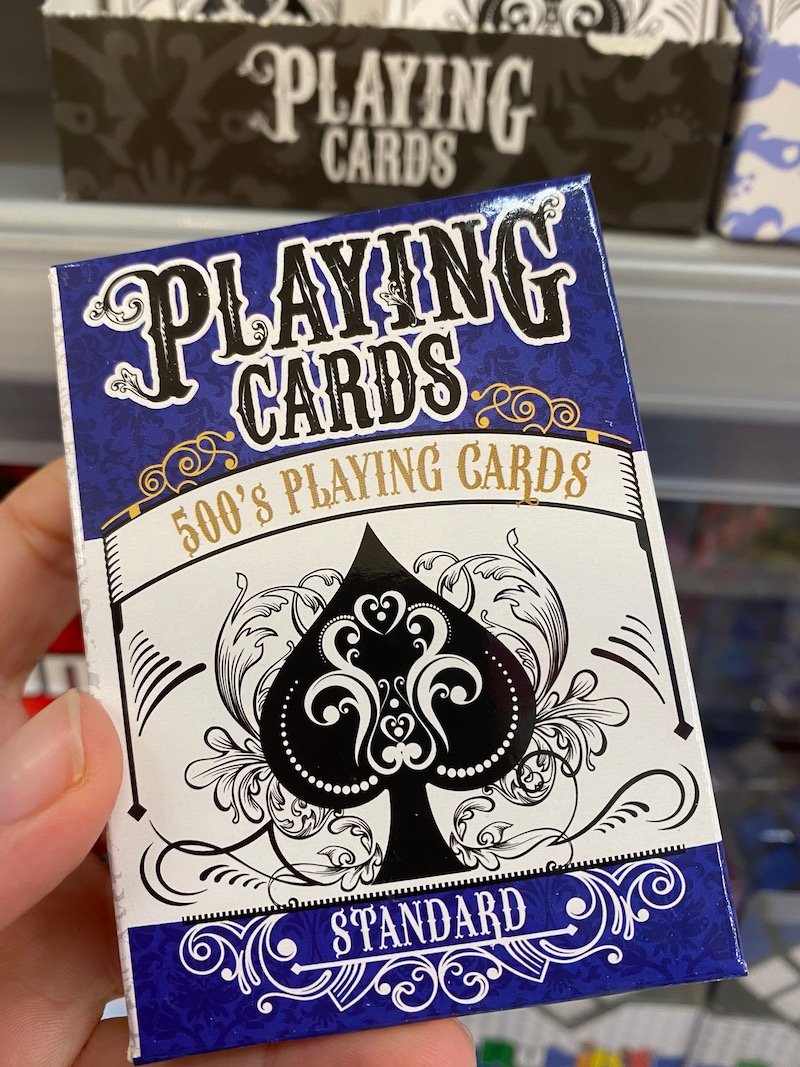 It’s as easy as shuffling the pack, cutting the pack in half (for two players), and then taking turns to lay one card on top of the pile.

When two cards match, the first person to ‘snap’ their hand down on the pile, wins those cards.

Person with the most cards at the end of the round wins.

There’s other fun travel games for families using a traditional pack of cards. 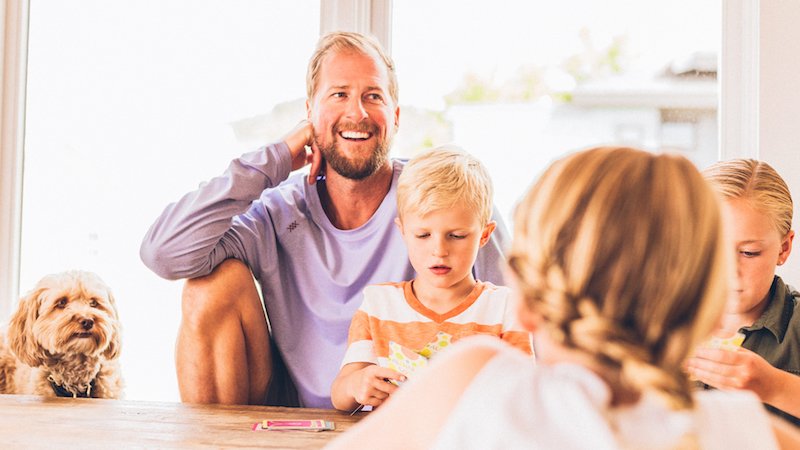 You start this game by removing one of the queens from a pack.

Deal the remaining cards evenly between the players.

Each person playing has to pick up their cards.

The person must make pairs out of the cards they have in their hand, then put all the pairs to one side.

If a person has three of the same card, eg three ‘7”s, they make a pair with two of them and leave the other one in their hand and puts them face down in front of them.

The real part of the game starts now.

This continues until all cards have been paired except one.

The unlucky person with that card is the Old Maid! 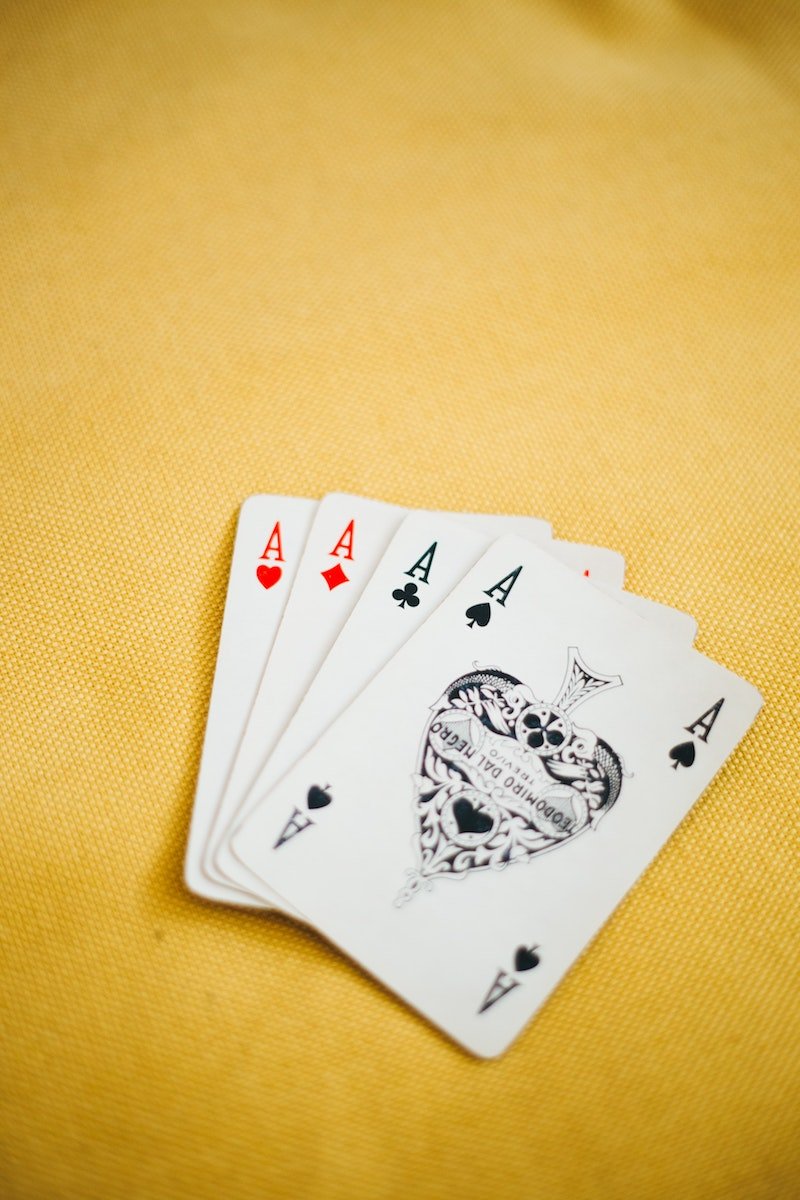 One person must deal out the shuffled Kmart cards.

If there are two or three players, each player is dealt seven cards.

If there are more people taking part, each player is dealt five cards.

The remaining cards are placed face down in a pile.

This is the “fish pond.”

Each player sorts their cards into groups (eg a group of ‘Jokers’, or a group of number ‘fives’).

The trick is to do this carefully and secretly so the other players don’t see.

The goal is to have ‘four matching cards’. 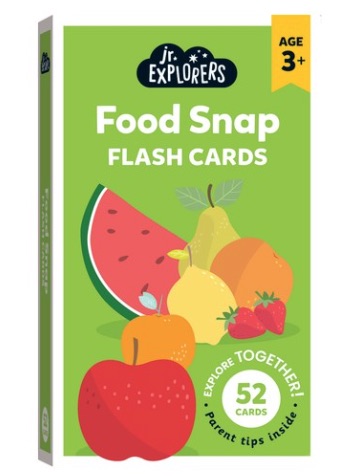 The object of the game is to find matching pairs.

Older children can use the whole deck of 52 cards (made up of pairs – eg, two black queens, two red queens), but it’s wise to halve this amount of ‘pairs’ with younger children.

Shuffle and spread the cards (pairs) you will use face down on a table between the players.

Cards can be laid in a random pattern, or if you are playing with younger kids, lay them out in a predictable grid, eg 7 cards wide, by 7 cards with an extra 3 in the last row.

Players take turns turning over two cards at a time.

All the players in the game must be given time to see what they are, and to take a moment to fix these in the mind.

If they are not a matching pair, try to remember what and where they are, then turn them back over.

The next player turns over two cards.

If they are a matching pair, that player removes them from the table and keeps them, and then has another turn.

When all cards have been removed from the table, each player counts up the number of cards they have collected. The player with the most cards wins. 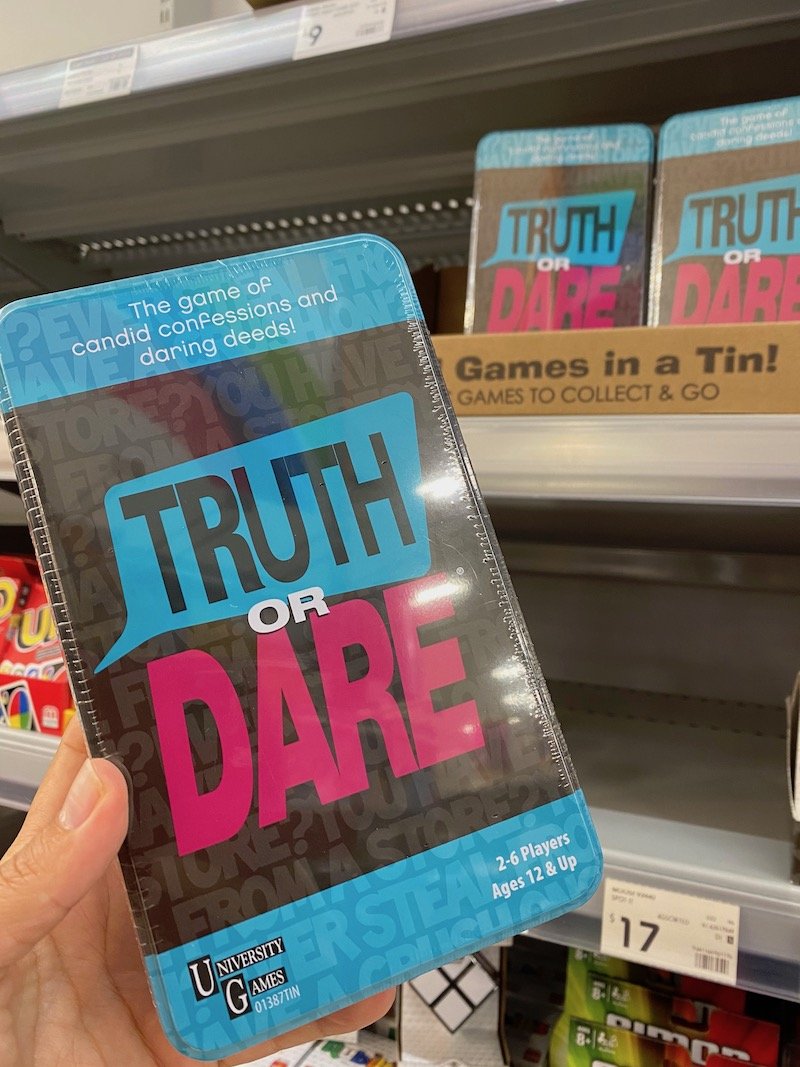 The all time favourite family game for teens.

Truth or Dare is the fast and furious game of facts and challenges.

The goal is to be the first player to get rid of all the Truth or Dare cards in your hand.

Answer pop culture trivia questions correctly in order to force your opponent to tell the truth.

If you answer the question incorrectly, your opponent can challenge you with a DARE. 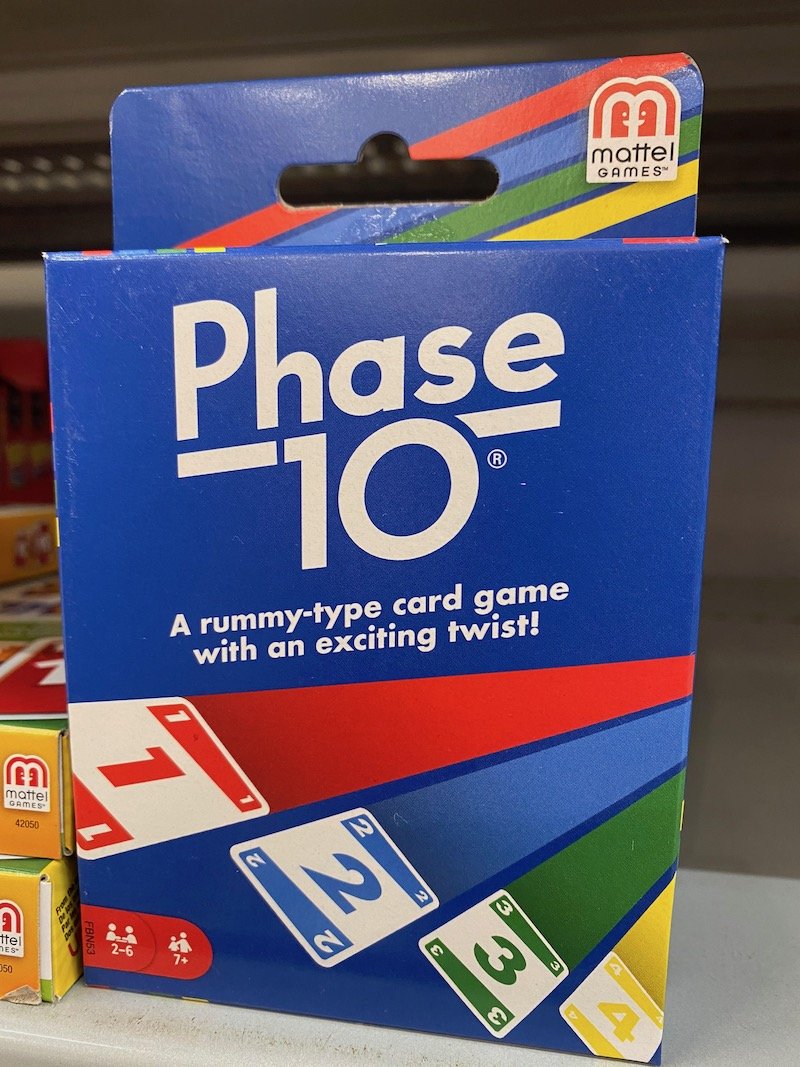 According to the shop, “the objective of the Phase 10 card game Kmart style is to be the first player to complete 10 varied phases with two sets of three, one run of seven or seven cards with the same colour.

The twist of this rummy game Kmart sells is that each Phase to be completed is specific for each hand dealt.

Players who complete one Phase advance to the next, but those who don’t must keep trying until they do.

Each deck features Wild and Skip cards that add excitement and can help you get out of a sticky situation”.

Win the game by being the first person to complete all 10 phases. 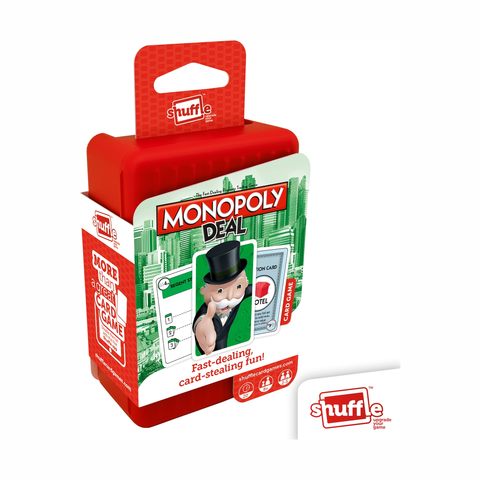 There’s 110 cards in this quick-moving card game including:

The winner is the first player to collect three complete Property Card sets in different colors.

A complete game can be played in 15 minutes!

The Monopoly Cards Kmart price is great value too. 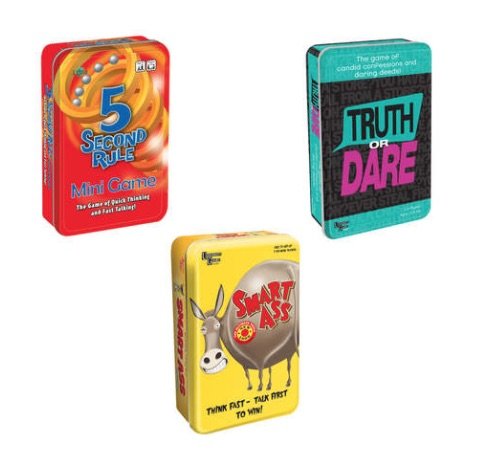 Kmart also sells Games in a Tin (such as the ones pictured above). 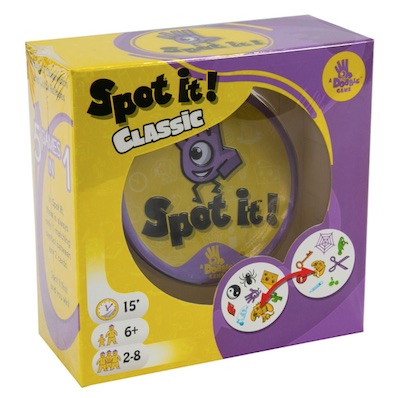 Our family favourite is Spot it card game!

It’s a great one for all ages where you have to be the first person to see the two matching items on a set of cards.

It’s not as easy as it sounds! 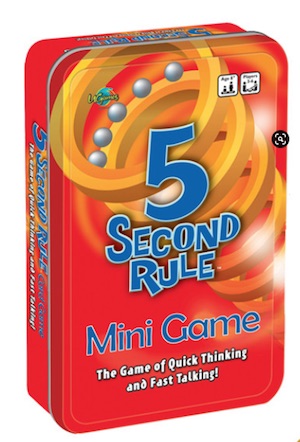 In this game, you have 5 seconds to answer a quick question such as: 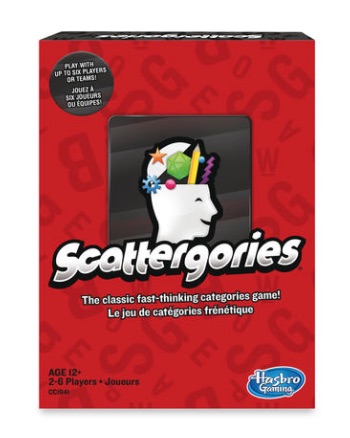 You can find a Kmart board game for varying skill levels too.

Board games at Kmart include: 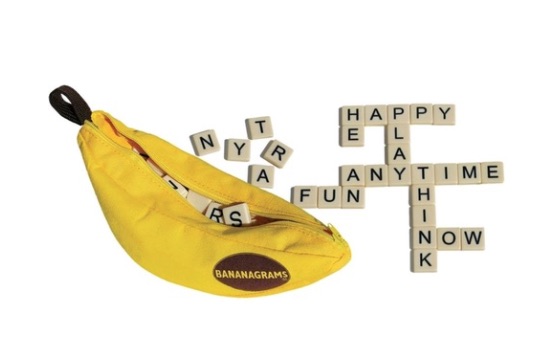 More Board Games at Kmart

This is only a small selection!

Kmart table games are good for rainy days when you are stuck in your cabin or caravan, and need something a bit more substantial than a quick card game. 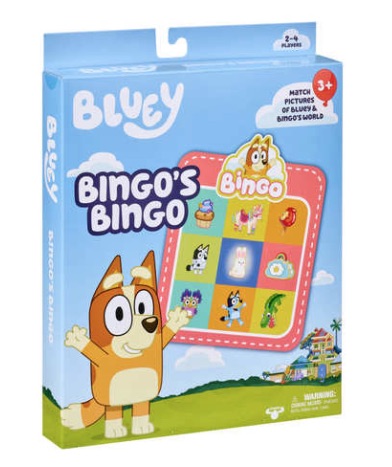 Did you know there’s a range of Bluey games too?

The kids will go crazy for these: 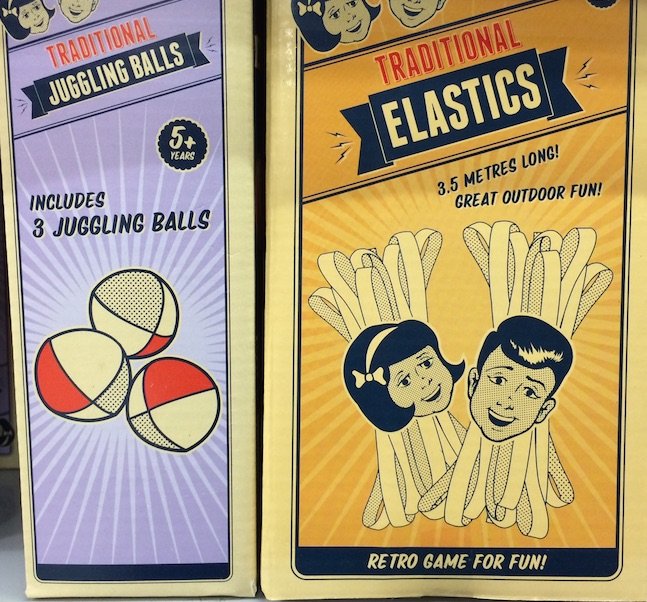 Ever wanted to run away and join the circus?

Brush up on some skills while on the road using a pack of Kmart juggling balls, and you might be the next star of Cirque du Soleil, an aerial trapeze artist, or at least the Ringmaster in your own family circus!

Google ‘how to juggle’ for lots of video tips.

For $3 (YES, $3!), it might be worth buying a couple of Hacky Sack Kmart style knock offs.

There’s bound to be someone in need of some happy juggling ball magic along the way.

No.2: How to play Hacky Sacks Kmart Style!

These balls can also be used as HACKY SACKS.

Playing Kmart Hacky Sack with other families you meet along the way is the ultimate family travel adventure!

We’ve played pseudo-tournaments with people from all over the world.

The goal of Hacky Sack (otherwise known as freestyle footbag) is to keep the ball off the ground for as long as you can, using the feet of all the players in the circle.

You can also play Hacky Sacks alone, and become a trick master!

Here is an awesome little link for a quick lesson in:

Hacky sack is the quickest way to make a new friend.

Just start playing and watch as other interested kids, mums and dads, sidle over. 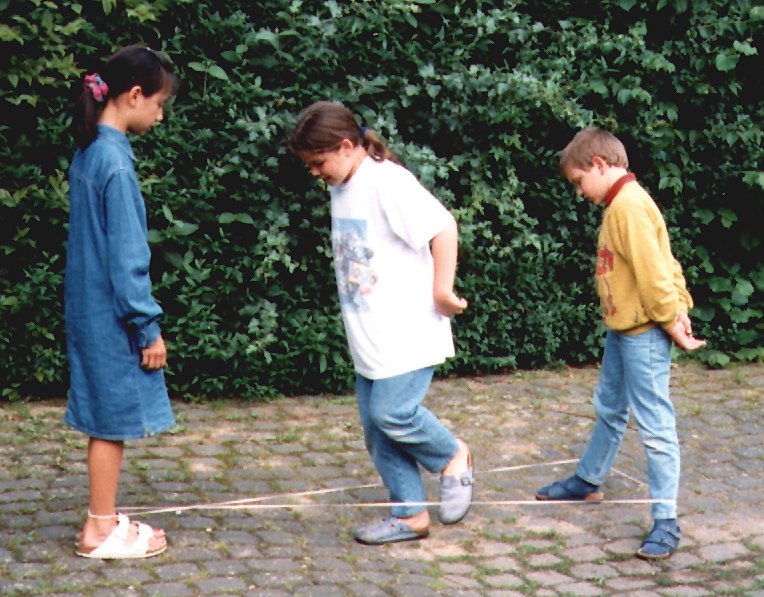 “England, Ireland, Scotland, Wales. Inside, outside, twist and out!”

“England, Ireland, Scotland, Wales. Inside, outside, inside, ON”

I’ve never forgotten it, and I bet you haven’t either!

(You’d have a hard time buying that much elastic in a haberdashery for that price.)

If you are ready to relive your bouncy childhood, visit JumpElastics for a little ready-made booklet of songs and instructions featuring illustrations too.

More Kmart games or Kmart board games for under $10?

How about picking up a skipping rope Kmart style?

A Kmart jump rope is a bargain at less than $8 a pop.

Let us know in the comments below if you’ve found any other Kmart travel games you love and would recommend to other traveling families.

Best place to find CHEAP travel games on a budget, with lots of choice, especially if kids are over 6 or 7.

Looking for more fun things to do with kids at home?

Click the link in blue below for more fun tips.