INSIDE: Roam the Gnome’s Epic List of Fabulous Eiffel Tower Facts for Kids!

The best thing we’ve learned from our travels is that is pays to find out some fun facts about the places you will visit BEFORE you go.

It brings the place alive to us, and makes the whole experience so much more interesting.

Take a look at these interesting facts about the Eiffel Tower. 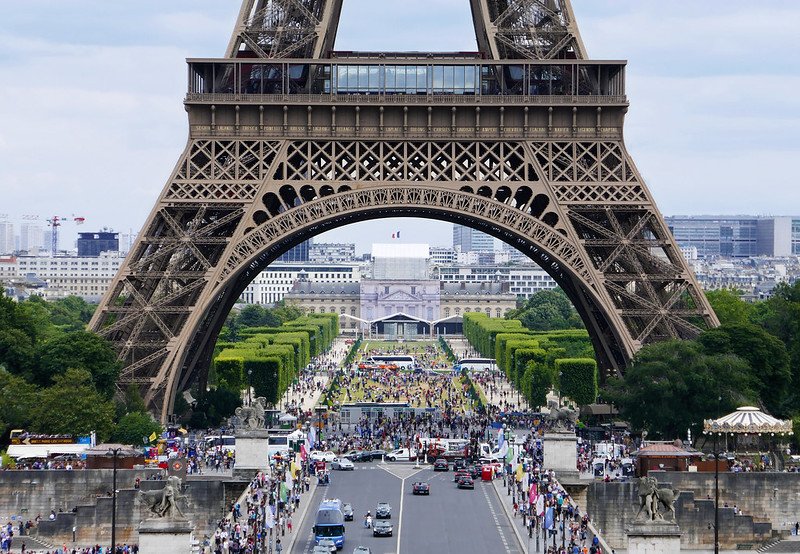 If you are planning a trip to Paris, and want all the details of what to do and what to see at the Eiffel tower, take a look at our guide below.

RELATED: The Ultimate Guide to the Eiffel Tower for Kids – 9 Helpful Tips for Taking Kids Up 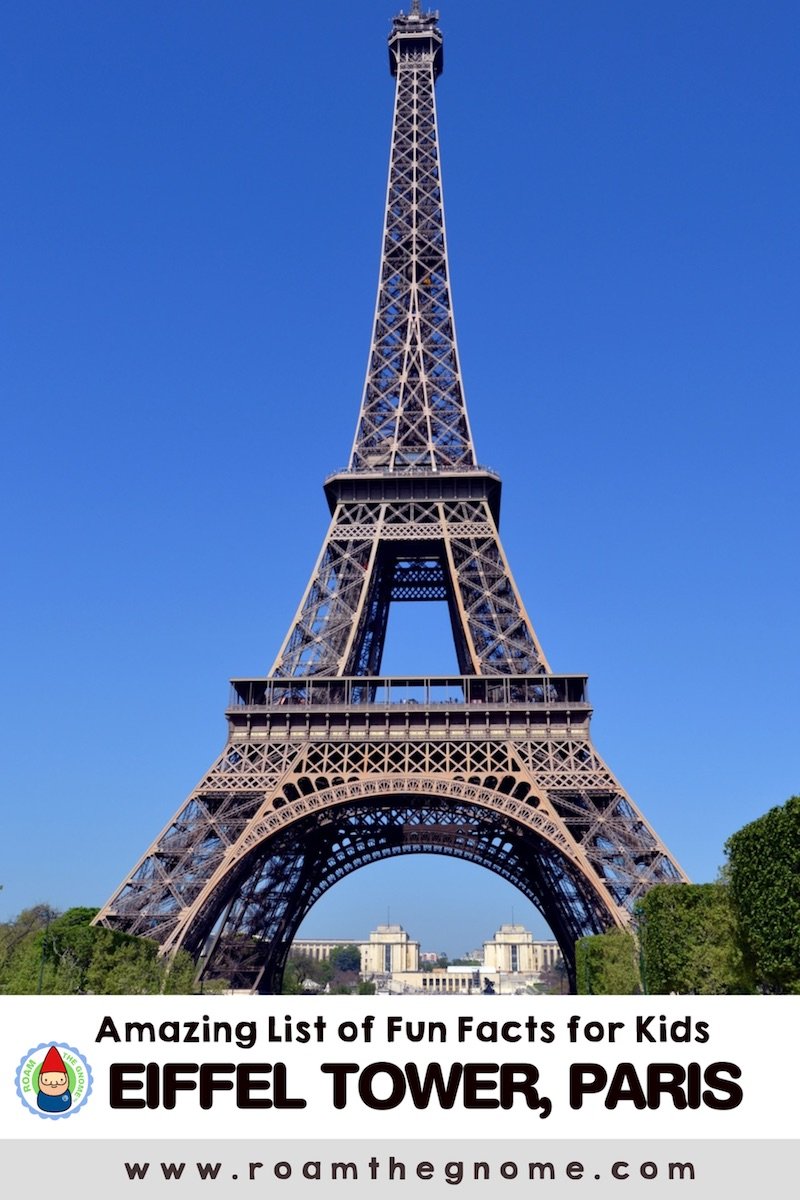 Here’s a list of both known and unknown facts about Eiffel Tower in France.  You’ll find both Eiffel Tower facts and history of le tour Eiffel.

Plus, we’ll answer questions such as:

No.1: What is an Eiffel tower?

The Eiffel Tower is a wrought iron lattice tower on the Champ de Mars in Paris, France.

No.2: Who designed the Eiffel tower?

NEW: Why was the Eiffel Tower built?

It was built for the Exposition Universelle.

No.3: Why it the Eiffel Tower called Eiffel?

It is named after the engineer Gustave Eiffel, as above. 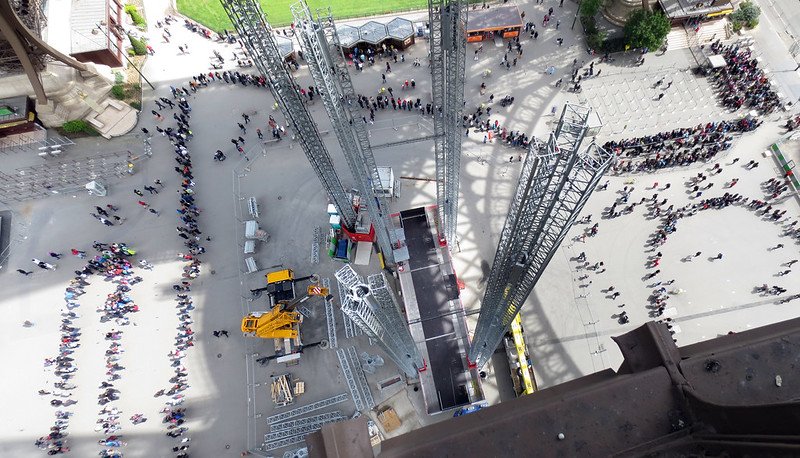 No.4: What year was the Eiffel tower built?

The design was chosen to commemorate the centennial of the French Revolution.

At first, it was highly criticized by some of France’s leading artists and intellectuals for its design, but it has become a global cultural icon of France and one of the most recognisable structures in the world.

No.5: When was the Eiffel tower completed?

The Eiffel Tower was completed in 1889.

No.6: When did the Eiffel Tower open?

No.7: How old is the Eiffel Tower?

In 2020, the Eiffel Tower celebrates a birthday of being 131 years old.

No.8: What is the height of the Eiffel Tower?

324 metres  tall, about the same height as an 81-storey building.

The top level’s upper platform is 276 m (906 ft) above the ground – the highest observation deck accessible to the public in the European Union. 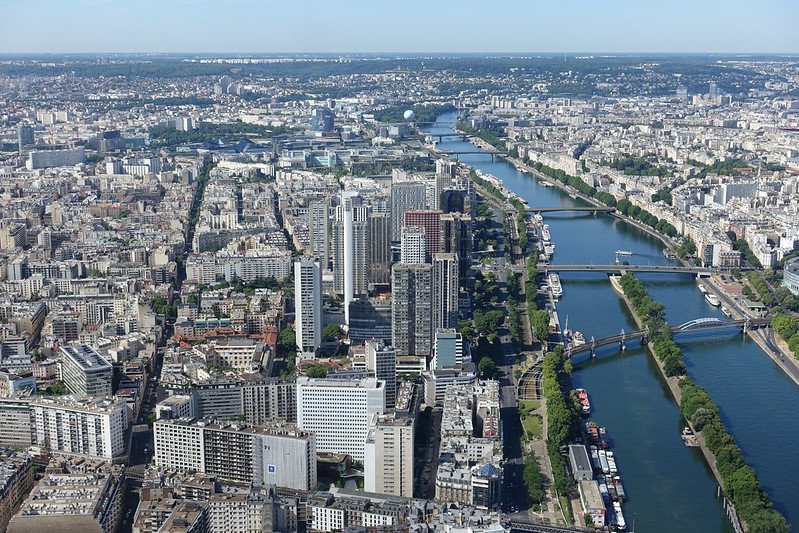 No.9: How tall is the Eiffel Tower in metres?

It’s the tallest structure in France.

No.10: How tall is the Eiffel Tower in feet?

NEW: How much does the Eiffel Tower weigh?

No.11:What is the Eiffel Tower nickname?

The French have a nickname for the tower: La Dame de Fer, meaning, “the Iron Lady.”

The Eiffel Tower in French is La Tour Eiffel. 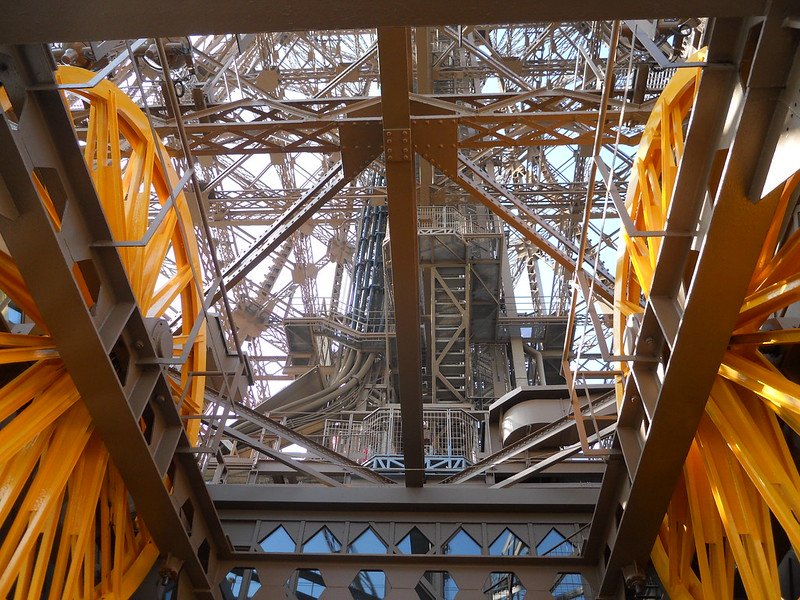 No.12: Does the Eiffel Tower have an elevator?

There is an elevator inside the Eiffel Tower.

Tickets can be purchased to ascend by stairs OR lift (elevator) to the first and second levels. 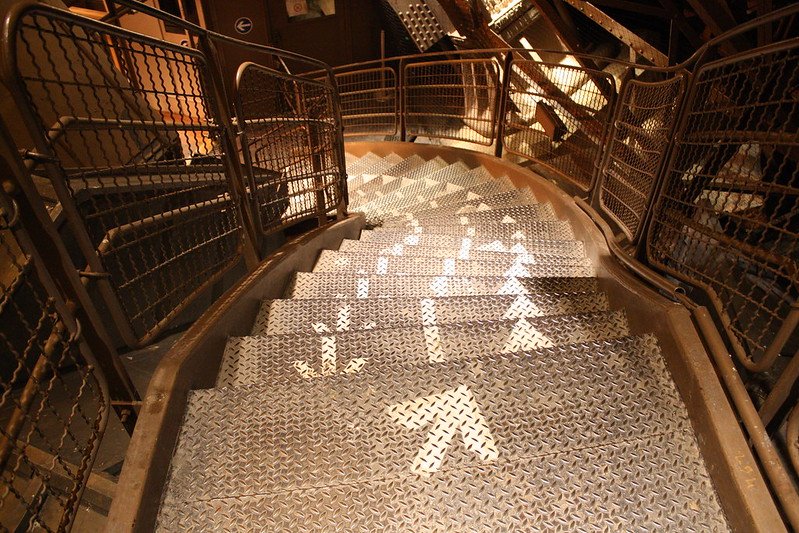 NO.13: How many stairs does the Eiffel Tower have?

When you get to the first floor, you can walk out onto the glass floor suspended 57 meters above the ground!

There’s 704 steps in total to the second floor.

Although there is a staircase to the top level, it is usually only accessible by lift. 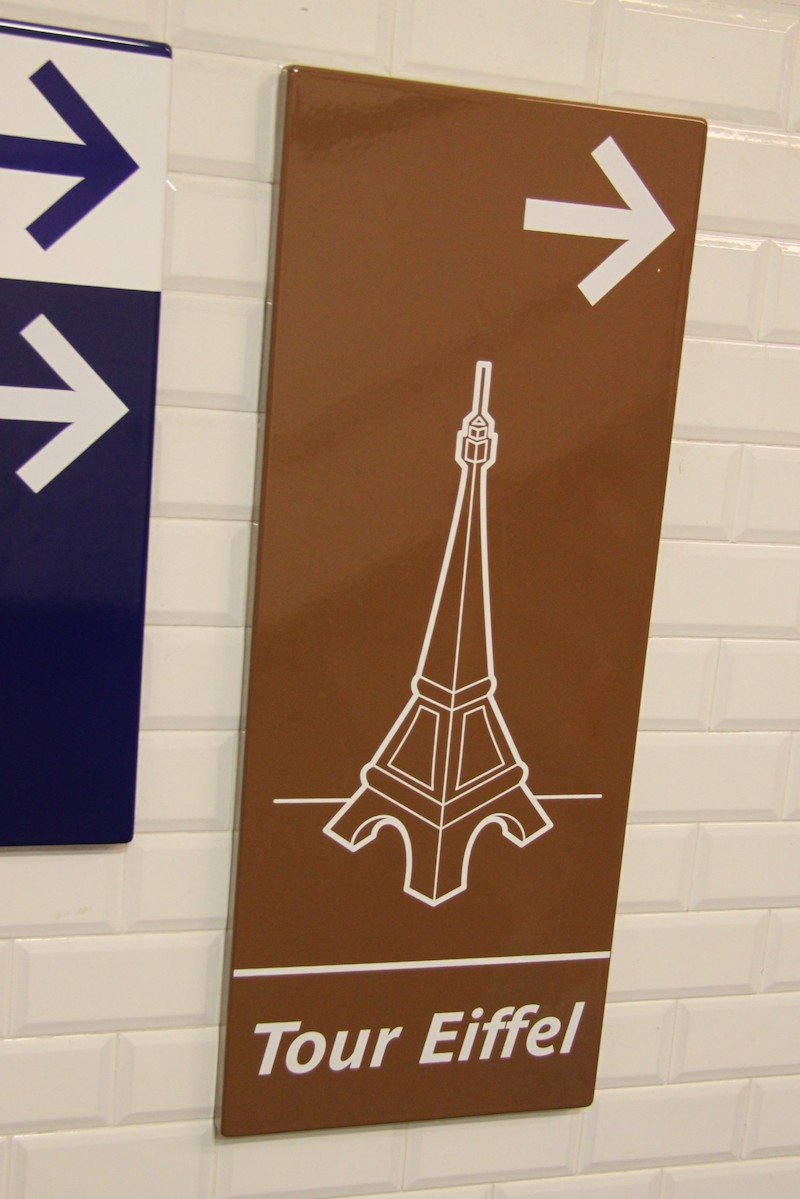 No.14: How many people have visited the Eiffel Tower since it opened?

Almost 250 million visitors of every age and origin have come from all over the planet to see it since its opening in 1889.

As France’s most iconic symbol in the world, and the showcase of Paris, today it welcomes almost 7 million people a year (around 75% of whom are foreigners).

This makes it the most visited monument that you have to pay for in the world. 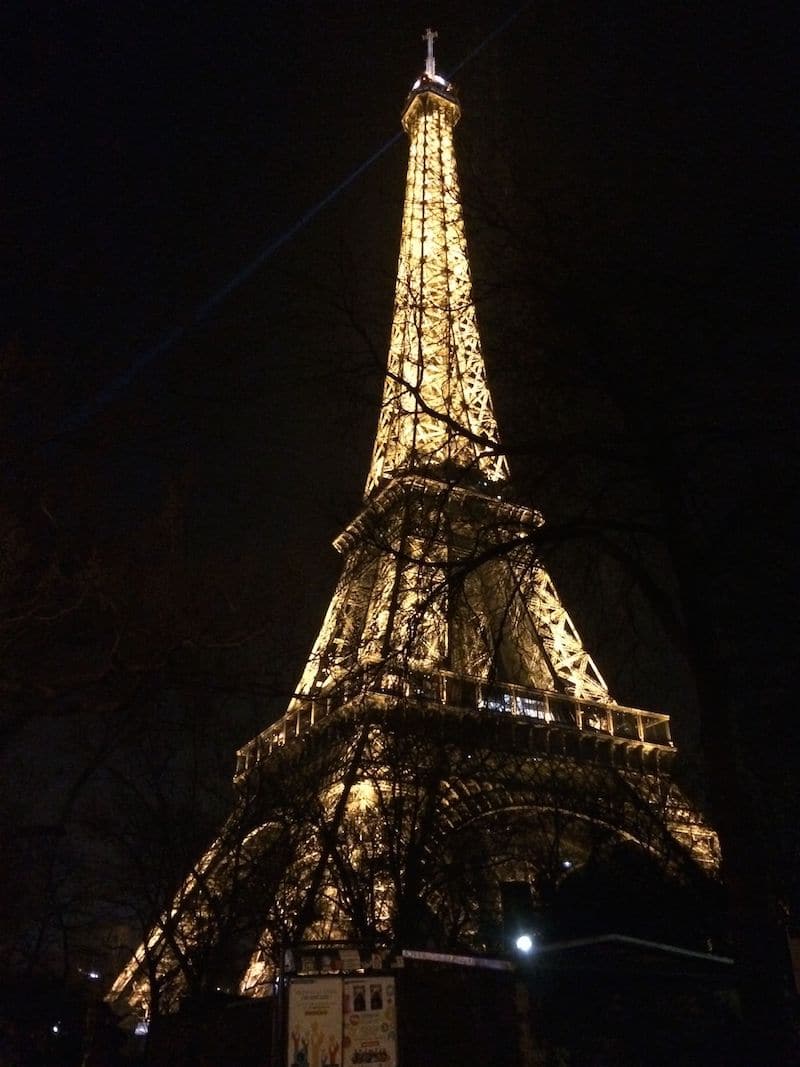 No.15: Why is it illegal to take a video of the Eiffel Tower at night?

Here’s an interesting piece of info.

It IS actually ILLEGAL to take photos or video of the Eiffel Tower at night!

The light display is actually a copyrighted art installation created in 1985 and still owned by artist Pierre Bideau.

That’s about it for our Eiffel Tower fun facts! 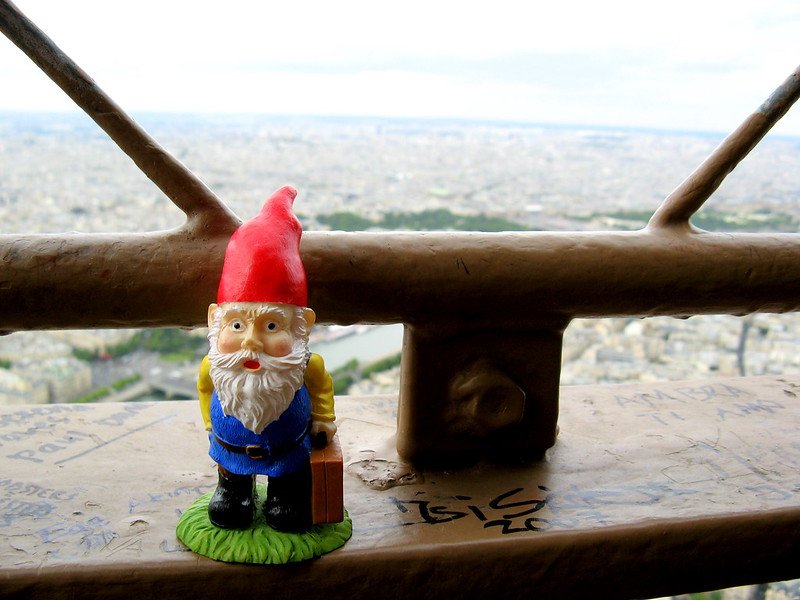 No.16: What is the life expectancy of the Eiffel Tower?

With ongoing maintenance, this structure will be around forever.

Regular painting by a crew of painters who work slowly, brushstroke after brushstroke by hand, takes place to stave off rust build up from pollution and bird droppings.

No.17: Is there a flat in the Eiffel Tower

There IS a secret apartment at the top of the Eiffel Tower. Gustave Eiffel created this special place and kept it a closely guarded secret, with only very few special guests allowed in.

Take a look inside here.

No.18: What popular sights can be seen from the Eiffel Tower

No. 19: Who currently owns the Eiffel tower

The Council of Paris owns the Eiffel Tower.

The structure has been owned by the City of Paris since its construction.

Do you know any more fun facts about the Eiffel Tower for Kids?

THE INSIDE SCOOP: Are you planning a visit to the Eiffel Tower?

Correct at time of publication on Roam the Gnome. Please check with venue for updates. We apologise in advance if there have been any changes we are unaware of. All prices in Euro, unless otherwise stated

If so, you’ll need the Ultimate Guide to the Eiffel Tower (click on the link at top of the page above) 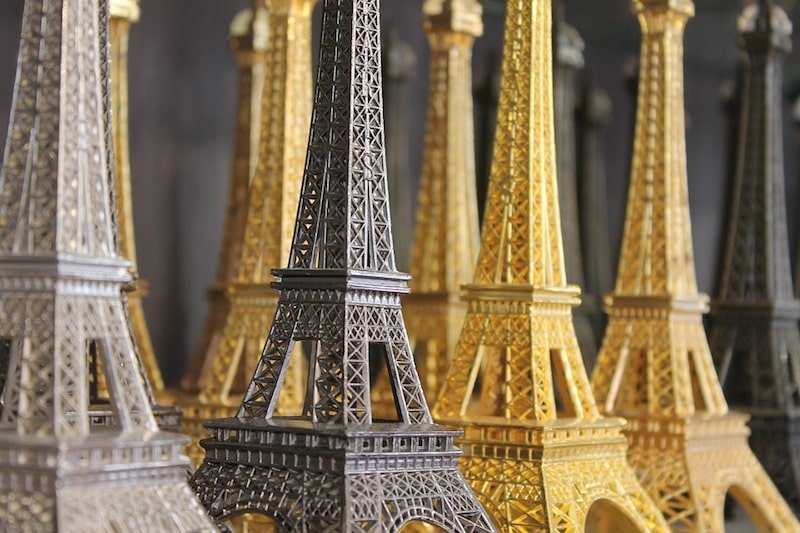 It includes a list of what to buy at the Eiffel tower & the best Eiffel Tower souvenirs for kids.

Plus, everything you’ll need to know before you visit the Eiffel Tower with kids.

You must go, at least once in your life.

Looking for MORE SUPER DOOPER FUN things to do with Kids in Paris?

Click the links in blue below for more Paris fun.